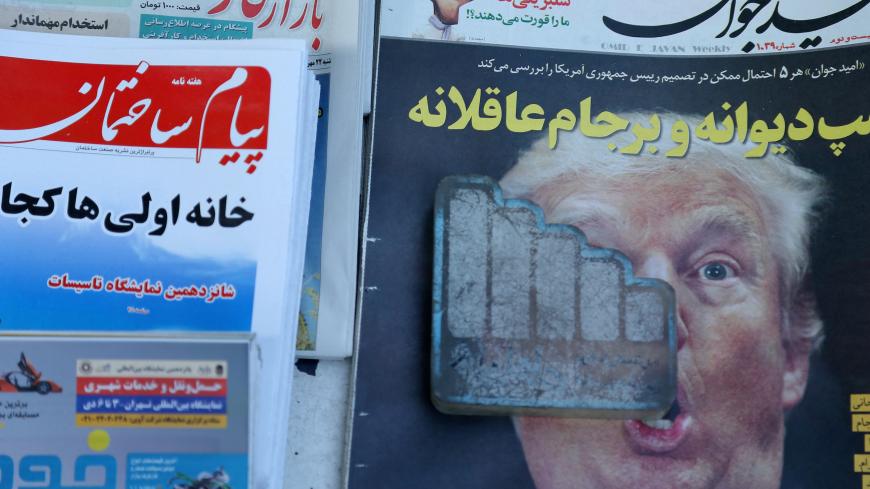 A newspaper featuring a picture of US President Donald Trump is seen in Tehran, Iran, Oct. 14, 2017. - REUTERS/Nazanin Tabatabaee Yazdi

WASHINGTON — Diplomats say sunset clauses that will eventually ease limits on Iran’s enrichment capacity are proving the most difficult issue in US-European consultations to see if they can find a compromise to meet US President Donald Trump’s demands to toughen Iran policy.

Trump vowed in January that he would not waive US sanctions on Iran again if his demands to “fix” the Joint Comprehensive Plan of Action (JCPOA) and other non-JCPOA issues were not met.

US and European diplomats, who met in Paris last week, said there was some progress after two rounds of talks to try to work out a compromise. Teams from the United States and the three European powers that helped negotiate the 2015 Iran nuclear deal — Britain, France and Germany — plan to meet again as early as next week, as well as on the sidelines of the next meeting of the eight-member Joint Commission overseeing JCPOA implementation in mid-March, sources said.

Consultations of the US-E3 working group on Iran are intensifying with an eye to May 12, the next deadline by which Trump must decide if he will issue a waiver of relevant US sanctions on Iran to stay in compliance with the JCPOA.

Diplomats and experts are also looking to French President Emmanuel Macron’s White House state visit April 24 for signals as to whether a transatlantic compromise might keep the United States on board the nuclear deal.

Trump again derided the “terrible” Iran nuclear deal in remarks to conservative activists last week, but then alluded cryptically to “interesting” developments happening after his decision not to certify it to Congress in October.

“We declined to certify the terrible one-sided Iran nuclear deal,” Trump said in a speech to the Conservative Political Action Conference on Feb. 23. “That was a horrible deal. … They’re saying ‘Death to America’ while they’re signing the agreement. … Why did we do it?”

The State Department said it is working with European allies to “address our shared concerns with the JCPOA and Iran’s malign behavior.” Last week, Brian Hook, the State Department policy planning chief, led a US delegation to the US-E3 working group talks in Paris. The US delegation also included Matthew McInnis and David Tessler from the State Department policy planning office, Deputy Assistant Secretary of State for Iran and Iraq Andrew Peek, Assistant Secretary of State for International Security and Nonproliferation Chris Ford, and Joel Rayburn, the National Security Council senior director for Iran, Iraq, Syria and Lebanon.

The US delegation and European partners “discussed the areas the president has identified last month where he wants to see improvements — including ensuring Iran never comes close to a nuclear weapon and addressing our concerns with the sunset dates, taking strong action if Iran refuses IAEA [International Atomic Energy Agency] inspections, and preventing Iran from developing or testing a long-range ballistic missile,” a State Department official, speaking not for attribution, told Al-Monitor. “There is broad agreement on the areas that need strengthening, but how that’s done in each of the three areas is the subject of our negotiations.”

“They also discussed the six non-nuclear/regional issues that the president also identified and called for stronger steps from our European allies,” the State Department official said, noting Trump in his Jan. 12 statement called for US allies to cut off funding to the Islamic Revolutionary Guard Corps and its proxies; designate Hezbollah in its entirety as a terrorist organization; constrain Iran’s missile development and stop proliferation of Iranian missiles, especially to Yemen; deter Iran’s threats to international shipping; and join the United States in countering Iran’s cyberthreats.

“The president was clear that he approved the issuance of sanctions waivers in January only in order to give us time to secure our European allies’ agreement to fix the JCPOA's terrible flaws,” the State Department official said.

“This is a last chance,” the State Department official said. “In the absence of a commitment from our European allies to work with us to fix the deal’s flaws, the United States will not again waive sanctions in order to stay in the Iran nuclear deal. And if at any time the president judges that agreement is not within reach, the United States will withdraw from the deal immediately.”

The United States and Europeans can probably find common ground on understood limits to Iran’s ballistic missile program and proliferation, sanctioning Iran’s support for militant proxy groups and more robust IAEA inspections, said Ali Vaez, the Iran project director at the International Crisis Group. But the Europeans are reluctant to sign off on Trump’s demands to reimpose sanctions should Iran, as permitted under the JCPOA, expand its enrichment capacity after a decade.

“My understanding of the two meetings so far is that more progress has been made than initially expected,” Vaez told Al-Monitor. “Because at the end of the day, on Trump’s key issues, there is enough common ground between the Europeans and US to come to a mutually acceptable formula.

“On the ballistic missile issue, there is an understanding that any Iranian movement to develop an ICBM [intercontinental ballistic missile] is unacceptable and will be met by joint sanctions,” Vaez continued. “That is something they can agree on. … And the Iranians would not like it, but they can live with it as well.”

“On [IAEA] access, there could be a formula without changing the terms of the deal to urge IAEA to do more to ensure that there are no suspicious activities taking place,” Vaez said. Similarly, “on the designation of individuals and entities related to Iran’s support of nonstate actors in region, on all of these, the Europeans and Americans can find common ground.”

“There are two problems,” however, Vaez said. “The first one is the sunset issue. I think the Europeans would only agree to something which at the core amounts to a fig leaf solution for the Trump administration. If [the Europeans] want to say, we will seek a supplemental agreement once the sunset provision sets in, or anything that could defer the crisis now and not amount to a commitment to the reimposition of sanctions.”

“The only thing that would satisfy the administration is for the Europeans to jointly commit to violate the deal by agreeing to sanctions on Iran for expansion [of its enrichment capacity], which the JCPOA allows," he added. “My understanding is they won’t do it. So far, there has not been an understanding.”

“The second problem is, in terms of what the Europeans can get in return,” Vaez continued. That would be a commitment “by the US to stay in the JCPOA. But how reliable would such a commitment be, and what mechanisms can they sign on to ensure the US stays in the deal? There is a big question mark there.”

“I really think what Trump wants at the end of the day is not possible without violating the deal,” Vaez said. “And that is why an agreement that would meet him halfway is unlikely to lead to stabilization of the deal.”

The Europeans should propose that compromises they make to meet US demands on Iran be reciprocated with concrete US actions to facilitate US commitments in the JCPOA that have remained mired in bureaucratic red tape, said Ellie Geranmayeh, senior policy fellow at the European Council on Foreign Relations. Those could include Treasury Department Office of Foreign Asset Control licenses for civil aviation sales to Iran agreed to in the JCPOA, assurances to European banks on financing permitted business in Iran, as well as legislative changes that would reduce the frequency of how often Trump has to waive sanctions or delegate that authority to the State Department, so allies are not in a constant state of uncertainty of what will happen the next 90 or 120 days.

“Any flexibility that the Europeans show to the Trump administration on this front needs to be made with certain preconditions relating to strengthening the nuclear deal and actually ensuring that the US is fulfilling its existing commitments under the deal,” Geranmayeh told Al-Monitor in an interview.

“The Europeans are going to try and work with the US administration … they are going to come out with some language — that the E3 [Britain, France and Germany] are happy with and doesn’t violate the JCPOA's current implementation,” she said.

And European efforts to try to strike a compromise with the Trump administration on toughening Iran policy are not without risk to the deal, warned Geranmayeh.

“The Europeans should not underestimate the Iranian response to perceived compromises that undermine the JCPOA,” Geranmayeh continued. “If there is action that is legitimately perceived by any party to the deal to be undermining the nuclear agreement, it could really open up a new path for any side, particularly Iran and the US, to unilaterally take measures. You start getting tit for tat that begins to hollow out the deal. … And European governments should not undermine their own credibility by becoming party to this process through association.

“But I think the gravity of that risk has not quite fallen on European calculations, but there is a sense that attempting to at least muddle through the coming years is better than facing a dilemma where Trump walks away from the deal now,” she said.

A top Iran nuclear negotiator said he was not concerned about US-European negotiations on Iran, but he warned that if the United States walks away from the JCPOA, he was not convinced that the Europeans, Russians and Chinese could sustain it.

“We are not convinced that the deal can survive without the US,” Iranian Deputy Foreign Minister Abbas Araghchi said in an interview in London with the BBC last week. “It is up to the other participants of the JCPOA to show and to convince Iranians that they can deliver JCPOA even, even without the US. This is not our understanding for the time being. If the US is out, we would also actually go out because there is no deal anymore. This is what we understand, and as we see Europeans are trying to prevent that.”

Araghchi did not rule out discussions about understandings on Iran’s ballistic missile program and regional posture, but he said they were contingent on the parties to the JCPOA living up to the deal they already made.

“Another deal on any other issue depends on how successful is the deal that we have already made, and we have remained fully [in compliance] to that, and the other side has not fully complied,” he said.