Concerted European diplomatic efforts have helped persuade Congress to not pass legislation that would violate the Iran nuclear deal, for now. 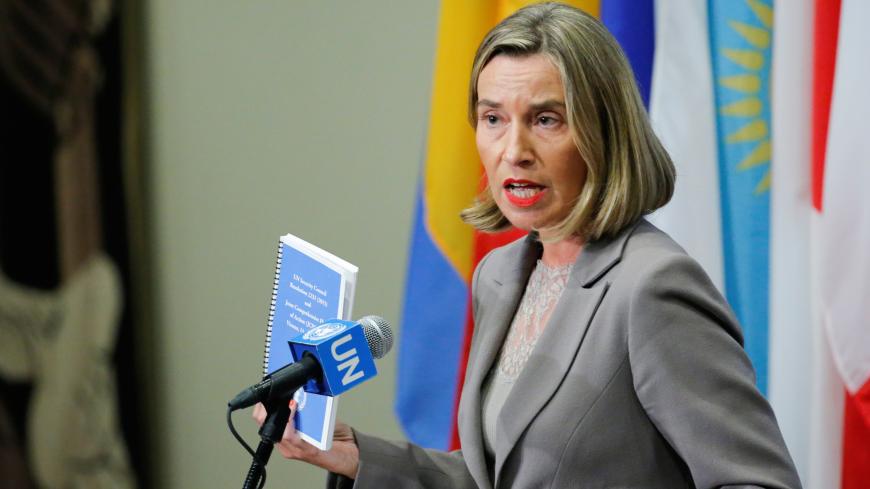 Meanwhile, once-discussed alternative draft legislation spearheaded by Sens. Tom Cotton, R-Ark., and Bob Corker, R-Tenn., has stalled in part because the Democrats have stood firm in opposing it and also because European diplomats have extensively consulted with members of Congress about how elements of it could violate the Joint Comprehensive Plan of Action (JCPOA).

So what happens next? Proponents of the deal, while welcoming Congress’ restraint, say it is too soon to celebrate. Fundamental uncertainty over Trump’s intentions and unpredictable decision-making continues to undermine confidence that the United States will come around to being persuaded to stay in the landmark 2015 accord.

“I think we are in a very precarious position,” former US nuclear negotiator Richard Nephew told Al-Monitor. “Personnel and developments and even Trump’s mood might determine if we stay in this thing.”

If the United States wants to continue to comply with the deal, at least for the time being, Secretary of State Rex Tillerson has to reissue the waivers for the relevant sanctions relief on Jan. 15-16.

"For the time being, we're in the agreement," Tillerson told State Department employees at a town hall meeting Dec. 12, of the JCPOA. "Congress is examining the agreement to see if there are things they'd like to ask us to do."

“We have not announced any intention to leave the JCPOA at this time,” a State Department official, speaking not for attribution, told Al-Monitor. “And we will continue to uphold our JCPOA commitments.”

“We won’t comment on any draft legislation, but we will continue to work with Congress to address the JCPOA’s serious flaws,” the State Department official added.

“The United States has been working with its allies for decades to counter the full scope of Iran’s malign activity,” a National Security Council spokesperson told Al-Monitor. “Now, this administration is doubling down on its commitment to combat Iran’s behavior, and this includes intensifying cooperation with European allies in all areas. Our European counterparts have made clear their unwavering support for the JCPOA. At the same time, they have made it clear, based on their own judgments, that a concerted transatlantic effort is necessary to reduce regional instability, halt ballistic missile development, and address human rights violations. We look forward to deepening this collaboration in the coming months.”

European allies have urged the Trump administration to commit to the accord, suggesting it would bolster their confidence as they discuss cooperating with the United States to address other shared concerns about Iran’s destabilizing actions in the region, from Syria to Yemen to ballistic missile tests.

"We hear a lot of people telling us their aim is not to destroy JCPOA," a senior European diplomat said on a visit to Washington earlier this month. "If we start from that premise, we can talk with the administration about various ways we can improve what is already on the table and talk with Congress about ways we can address ballistic missiles or regional activity."

“The Europeans are trying to secure the administration’s commitment to the deal in return for cooperation to counter Iran on other fronts,” Ali Vaez, a senior Iran analyst at the International Crisis Group, told Al-Monitor. While it is not an explicit quid pro quo, there is perhaps an implicit one, he said.

“If you don’t keep the deal, you are going to be isolated,” Vaez said. “On the Hill, that has been pretty effective.”

European diplomats and veteran arms control negotiators say it is quite common to make successor arms control agreements over the lifetime of an accord, but not by disrupting it in the beginning, when it is being implemented.

“In arms control agreements, you very rarely have everything you want, and the way of addressing that is to work over the course of time on successor agreements,” the senior European diplomat said.

The Trump administration has reluctantly conceded that Iran is abiding by the JCPOA, but said that it finds the accord inadequate. Trump, in announcing his decertification decision in October, cited as his rationale not that Iran was in violation of the accord, but that he could not certify that the sanctions relief the US provides in the deal is proportionate to Iran’s actions to curb its nuclear program. But, in fact, the International Atomic Energy Agency (IAEA) verified that Iran had, in the run-up to implementation day in January 2016, poured concrete into the core of its unfinished Arak plutonium reactor, stopped all enrichment and removed centrifuges from the underground Fordo facility, which is being converted into a scientific research site. The IAEA also verified that Iran removed thousands of centrifuges from its main Natanz enrichment facility, shipped out all but a few hundred kilograms of its low enriched uranium stockpile, ended 20% enrichment for medical isotopes and provisionally implemented the Additional Protocol, which granted the IAEA the most far-reaching monitoring and verification access of any arms control deal in the world.

A European official compared the logic of withdrawing from an accord because of dissatisfaction over sunsets in 10 years to a starving family refusing to eat food in a refrigerator because the food’s expiration date is in 30 days, and they would still need to eat in 90 days.

“That is the logic we look at here,” said the European official, speaking not for attribution. "The agreement moved us from two months to a one-year breakout time. We were not able to achieve 20, 30, 40 years. But that is not what gives us any reason to walk away from a quality agreement.”

"We have not come to Washington to beg," the European official said. "The way we look at the substance, if we can’t convince people here with the best possible arguments, if they decide to walk away, we will not be able to stop them. But until then, we want to present the most enlightened case."

"For us, it is not a purely military approach, not a pure push-back approach," he said on how his country views policy towards Iran. "We seek an Iran policy that] takes care of our concerns, [and seeks to find] a benign place for Iran in the region. It is something we are ready to engage the administration and the Congress on."

Consultations with diplomats from the UK, France, Germany and Brussels have been very effective and persuasive with members of Congress, congressional aides told Al-Monitor. Sen. Ben Cardin, D-Md., the ranking Democrat on the Senate Foreign Relations Committee, has indicated that he will not support any legislation that crosses two red lines: that it would make the United States be the one to violate the JCPOA or that the Europeans are not on board with the legislation.

“It is the administration’s job to bring the Europeans along,” one congressional aide told Al-Monitor. “I think [Trump] has taken the pin out of the grenade and thrown it to us. He is poised to blame us if it does not work. But we are still trying to work in good faith.”

Even amid uncertainty over what Trump will do on the JCPOA, European diplomats say they, too, are working in good faith to consult with the Trump administration on how to address other concerns presented by Iran (and others) in the region. European diplomats say those consultations have become more productive since the Trump administration completed its Iran policy review in October. They see potential prospects for working together on Yemen, which is suffering a catastrophic famine, and where over two years of Saudi-led airstrikes have failed to dislodge the Houthi rebels, who are alleged to receive support from Iran.

The regional issues are where more of the action is at this point, a second European official said, referring to consultations with the US government.

In the meantime, US officials for now continue to take part in the eight-member Joint Commission overseeing implementation of the Iran nuclear deal. Undersecretary of State for Political Affairs Tom Shannon is leading the US delegation to the Joint Commission meeting in Vienna on Dec. 13, which also includes the political directors from the UK, France, Germany, Russia, China, the European Union and Iran, the State Department said. He is accompanied by the director of the State Department’s Office of Iranian Affairs Steven Fagin.