The Trump administration told Congress on Monday that Iran was violating the "spirit" of the deal and made the case for a thorough renegotiation. 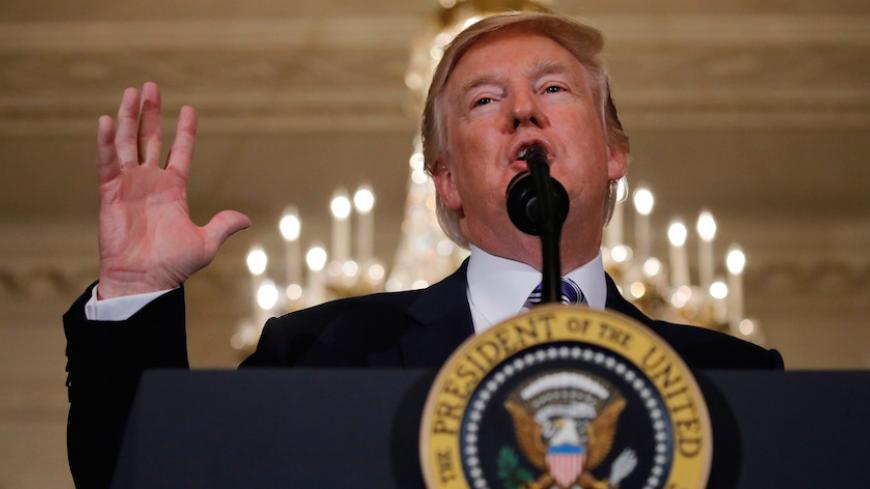 US President Donald Trump speaks during a "Made in America" products showcase event in Washington, at the White House, July 17, 2017. - REUTERS/Carlos Barria

WASHINGTON — The Donald Trump administration on Monday told Congress that Iran remains compliant with the nuclear deal while building the case for a thorough renegotiation of the international accord.

The certification, which Congress mandates every 90 days, was accompanied by a new raft of non-nuclear sanctions against 18 Iranian entities and individuals. Trump administration officials also told reporters that they plan to work with US allies to toughen provisions of the accord.

“The nuclear agreement was the tail that wags the Iran policy dog,” a senior administration official said on a White House call with reporters Monday night, characterizing the deal under President Barack Obama, as the current administration sees it. “We are determined not to continue that.”

This is the second time that the State Department has certified Iran’s compliance since Trump took office. This time, the administration showed signs of unusual agitation around the rollout of the decision, including the abrupt scrapping of a midday White House conference call with reporters that eventually got rescheduled for that evening.

Asked about the canceled briefing, officials seemed plainly unsure of whether the delay indicated that the administration had been rethinking its anticipated decision to certify compliance. Even as White House press secretary Sean Spicer told reporters at an off-camera press briefing Monday afternoon that the State Department would announce a decision “very shortly,” the agency did not have any information for reporters on the certification decision until today.

The Trump administration’s continued deep ambivalence about the deal suggests that it may eventually seek to find a way to break the deal without getting blamed. Senior officials stressed that President Donald Trump is determined that his administration’s broader policy toward Iran not be held hostage by the nuclear deal negotiated by his predecessor, Obama, even if he is not ready to walk away from it just yet.

“The secretary of state is in the process of certifying to Congress that the conditions that are laid out in [congressional legislation] have been met,” a second senior administration official said on the White House call. “However, the secretary of state and president intend to emphasize that Iran remains one of the most dangerous threats … particularly in its region.”

A third senior administration official said the Trump administration intends to work with European allies to try to “build the case for serious flaws of the agreement, while also looking for ways to more strictly enforce the deal.”

Among the alleged flaws in the Joint Comprehensive Plan of Action (JCPOA), the officials cited the fact that certain restrictions sunset after several years, allowing Iran eventually “to openly pursue industrial-scale enrichment,” the third official said. In addition, the official said, “The JCPOA fails to address Iran’s non-nuclear behavior.”

“Notifications on all points were sent to Congress last night,” a State Department official told Al-Monitor today. “Iran is unquestionably in default of the spirit of the agreement. Even as we continue to work to prevent Iran from ever obtaining a nuclear weapon, we will not look away while Iran threatens the United States and our allies outside the nuclear realm.”

The official added, “While the United States has to date upheld its commitments under the JCPOA, we will continue to closely monitor Iran’s destabilizing and dangerous behavior. While our review of the JCPOA is ongoing, the United States expects strict Iranian adherence to its JCPOA nuclear commitments and will look to the International Atomic Energy Agency to continue to monitor and verify all of Iran’s nuclear commitments.”

Iranian Foreign Minister Mohammad Javad Zarif, currently in New York for meetings at the United Nations, said Iran saw the nuclear deal in part as a test of whether the United States would make good on its commitments. Iran has options, he said, if the United States or any other party breaks the deal.

“As we’ve said in the past, we wanted that agreement to be the foundation and not the ceiling,” Zarif told the National Interest July 17. “If it comes to a major violation, or what in the terms of the nuclear deal is called significant nonperformance, then Iran has other options available, including withdrawing from the deal."

Of course, it is also possible that is exactly what anti-deal hawks in Washington hope — that US pressure and ramped-up sanctions will get Iran to abandon the deal first.

The official referee on JCPOA compliance — the eight-member Joint Commission overseeing implementation of the deal — is due to meet in Vienna this Friday. The meeting will be chaired by the European Union’s Helga Schmid and “offer an opportunity to review the implementation of the JCPOA as far as nuclear and sanctions related issues are concerned,” an EU press release read. The United States is expected to be represented at the quarterly meeting by Undersecretary of State for Political Affairs Tom Shannon and Deputy Assistant Secretary of State for Iran Chris Backemeyer.

by Murielle KASPRZAK and Joseph SCHMID | AFP | May 26, 2022
END_OF_DOCUMENT_TOKEN_TO_BE_REPLACED