Iran Foreign Minister Mohammad Javad Zarif says the Trump administration seems to have come to the realization that scrapping the deal outright would isolate the United States globally. 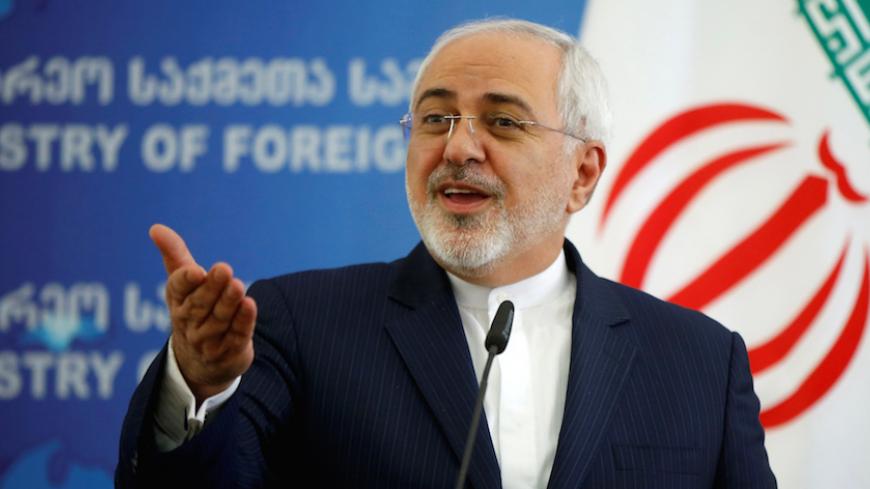 NEW YORK — Iranian Foreign Minister Mohammad Javad Zarif said Tuesday that Iran was still not certain whether the Donald Trump administration wants to scrap the Iran nuclear deal. But he said critics of the deal — reached in 2015 after years of intensive negotiations — are wrong to think that a better agreement is available.

“We still do not know what they want to do,” Zarif said. “They have been talking about scrapping the deal. … But they seem to have come to the realization that scrapping the deal is not something that would be globally welcome. … [So] they now try to make it impossible for Iran to get the benefits from the deal.”

Zarif spoke to a small group of American journalists at the Central Park residence of Iran’s ambassador to the United Nations, a day after the Trump administration grudgingly certified that Iran was complying with the nuclear deal while slapping sanctions on 18 Iranian entities for non-nuclear concerns. Unlike its predecessor, Trump aides insisted, the new administration refuses to be held hostage by the nuclear accord in devising a more aggressive posture to counter Iranian actions in the region.

Under the Barack Obama administration, “the nuclear agreement was the tail that wags the Iran policy dog,” a senior Trump administration official told journalists on a White House call Monday night. “We are determined not to continue that.”

Zarif, who has served as Iran’s foreign minister since 2013 and as Iran’s envoy to the United Nations in New York before that, did not seem overly rattled by the Trump administration’s tough talk. But he mentioned reports that Trump had urged fellow Group of 20 leaders in Hamburg, Germany, this month not to invest in Iran; Zarif said that would be a violation of the Joint Comprehensive Plan of Action (JCPOA).

“It’s become a rather tired routine,” Zarif said. “Each time they want to certify [Iranian compliance] they make sure to do something negative. It is obviously a sign of bad faith.”

Zarif said that the Trump administration was hardly the only party to be dissatisfied with the nuclear deal, but that there was not a better deal to be had.

The “JCPOA is not a deal that anyone loves,” Zarif said. “It was the only deal possible.”

“Believe me, I had to go through hell every other day in Iran, if not every day,” Zarif said, referring to hard-liners’ criticism that the deal did not give Iran sufficient economic benefits. Pointing to his deputies and fellow nuclear deal negotiators in the room, deputy foreign ministers Abbas Araghchi and Majid Ravanchi, Zarif added, “and my colleagues Araghchi and Ravanchi go through hell every hour.”

The JCPOA “was negotiated and drafted based on mutual distrust,” Zarif said. “It is not an agreement based on trust. … [You] will see mistrust in every sentence and paragraph of the deal. And it is mutual.”

“That is why there are mechanisms to deal with minor violations, major violations and major breaches, [and] significant noncompliance,” Zarif said. “We have avenues for dealing with them.”

“If we have a case of significant non-compliance … then Iran has the option to walk out,” Zarif noted. “I don’t think we are there yet.”

Zarif said he has had no communications yet with his new US counterpart, Secretary of State Rex Tillerson.

“No, I have not asked [for a meeting], and I don’t think I will,” Zarif said. He said he and Tillerson’s predecessor, John Kerry, did not often formally request meetings. “If we were in the same place at the same time, and the possibility arose, we would meet,” Zarif said of Kerry.

The United States and Iran are expected to hold a bilateral meeting on the sidelines of the Joint Commission meeting on implementing the JCPOA in Vienna on Friday, diplomats said. US Undersecretary of State Tom Shannon will lead the US delegation to the Vienna meeting, and Araghchi and Ravanchi will both attend on the Iranian side.

by Murielle KASPRZAK and Joseph SCHMID | AFP | May 26, 2022
END_OF_DOCUMENT_TOKEN_TO_BE_REPLACED