President Trump’s pick to replace Rex Tillerson at the State Department has called the Iran agreement “disastrous” and threatened military action against Iran. 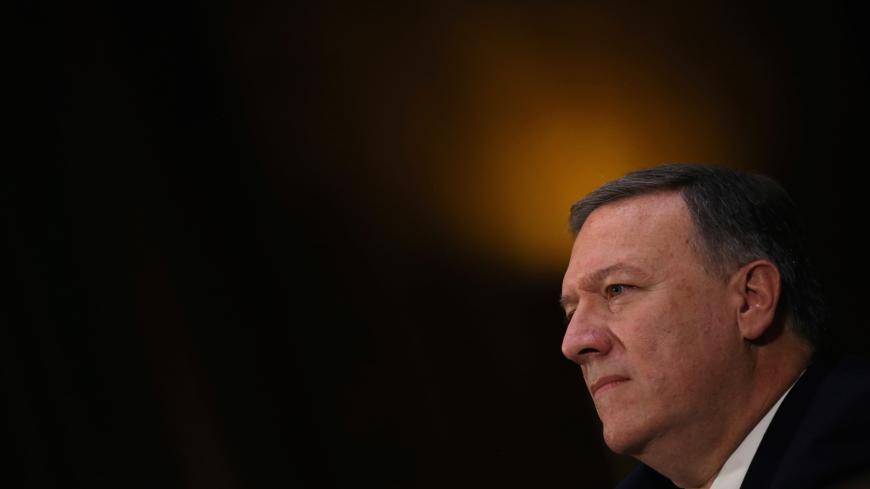 Mike Pompeo arrives to testify before a Senate Intelligence hearing on his nomination to become director of the CIA, on Capitol Hill in Washington, Jan. 12, 2017. Pompeo was a Republican congressman representing Kansas at the time. - REUTERS/Carlos Barria

President Donald Trump’s shock Twitter announcement today that he’s replacing Secretary of State Rex Tillerson with Iran hard-liner Mike Pompeo immediately generated considerable backlash from advocates who fear that he could precipitate the president’s threats to pull out of the Iran nuclear deal.

Trump’s next opportunity to reimpose sanctions lifted under the 2015 nuclear deal falls on May 12. The president had tasked Tillerson with negotiating new restrictions on Iran’s nuclear and ballistic missile program with European partners by then, a tight deadline only complicated by today’s announcement.

Pompeo, who currently leads the CIA, has called for “rolling back” what he called a “disastrous” nuclear agreement negotiated under President Barack Obama. As a Republican congressman from Kansas during diplomatic negotiations in 2014 he went even further, hinting at military action.

“It is under 2,000 sorties to destroy the Iranian nuclear capacity,” Pompeo told reporters at the time. “This is not an insurmountable task for the coalition forces.”

Stephen Miles, the director of Win Without War, a coalition of anti-war activists, called Pompeo’s nomination “a really bad signal.”

“Mike Pompeo has for years been an opponent of this deal,” Miles told Al-Monitor. “He has said how he feels about it and he has given no indication that he has changed his position today. From our perspective, his position is already disqualifying.”

Miles told Al-Monitor that his coalition plans to lobby Senate offices against Pompeo’s nomination similar to their campaign last year against Tillerson. Tillerson was ultimately confirmed 56-43, with three Democrats and one independent who caucuses with the Democrats joining their Republican colleagues to vote for him.

Republicans currently hold 51 seats, a slight majority, in the Senate. One of the Republicans, Sen. Rand Paul of Kentucky, voted against Pompeo’s nomination to be CIA director last year because of Paul's concerns over Pompeo’s support for torture and domestic spying.

Since then, Paul has come out in support of the Iran deal after voting against it in 2015, saying the United States should stay in as long as Iran continues to be found in compliance. Paul is set to make an announcement on Pompeo’s nomination on Wednesday, raising speculation that he may come out in opposition.

Ryan Costello, the assistant policy director for the advocacy arm of the National American Iranian Council, told Al-Monitor that his organization “will be in close touch with the Senate to detail Pompeo's long history of ideological opposition to nuclear negotiations and the Iran nuclear deal.”

Although the Senate confirmed Pompeo to his current position 66-32, his hard-line stance on Iran may prove to be a bigger obstacle in his quest to become the top US diplomat. Some Democrats are already implying that he will face an uphill confirmation battle, potentially leaving very little room for Republican defections.

“He’s got a lot of work to do to get Democratic votes,” Sen. Chris Murphy, D-Conn., who sits on the Foreign Relations Committee, said in a statement today. “The last thing we need is a ‘yes’ man at State who views America’s power exclusively through the prism of military power and covert action.”

While Murphy argued that Pompeo’s record against diplomacy bodes ill for the United States’ top diplomat, he questioned how effective an advocate Tillerson had been for keeping the United States in the deal.

Even Democrats who voted against the deal, such as Sen. Bob Menendez, D-N.J., the top Democrat on the Foreign Relations Committee, have opposed Trump’s threats to unilaterally withdraw.

“From what I’ve read of Director Pompeo’s remarks, they seem to echo the president’s,” Menendez told Al-Monitor. “The president has a disdain for the agreement and then he has a plan for withdrawal.”

Indeed, Pompeo called for the United States to exit the Iran deal the day before Trump nominated him as CIA director in November 2016.

For his part, Trump explicitly cited Tillerson’s opposition to exiting the Iran deal as a reason for replacing him with Pompeo.

“We got along, actually, quite well, but we disagreed on things,” Trump told reporters at the White House today. “When you look at the Iran deal, I think it’s terrible. I guess he thought it was OK. I wanted to either break it or do something and he felt a little bit differently.”

“With Mike … we have a very similar thought process,” Trump added.

Pompeo’s hawkish line on Iran and his warm relationship with Trump has garnered glowing praise from Iran hard-liners in Congress.

Sen. Tom Cotton, R-Ark., who is consulting with the White House and Sen. Bob Corker, R-Tenn., on draft legislation to alter what they view as flaws in the deal, praised Pompeo’s nomination to be secretary of state.

“Obviously the administration had a position on that driven by the president, and Director Pompeo contributed to that from an intelligence standpoint,” Cotton told Al-Monitor. “Now he’ll be contributing to it from a policy standpoint at the State Department.”

Similarly, Sen. Marco Rubio, R-Fla., who has also called on Trump to consider exiting the deal, said he will “enthusiastically support” Pompeo’s nomination in a statement today.

Senate Foreign Relations Committee Chairman Corker said his committee would hold a confirmation hearing for Pompeo in April, committing to “consider his nomination as expeditiously as possible.”