US expected to recertify Iran compliance with nuclear deal

The secretaries of state and defense appear to have overruled Iran hawks in the White House and Congress. 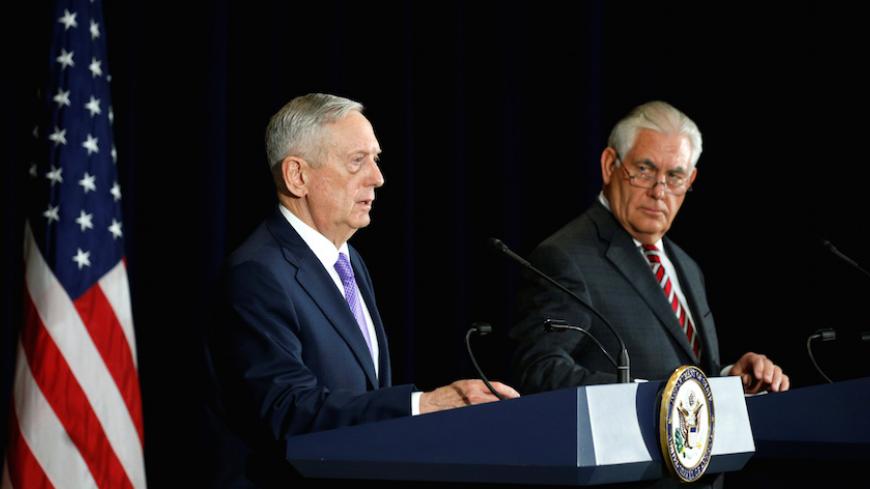 WASHINGTON — The Donald Trump administration is expected to again certify Iran’s compliance with the nuclear deal, possibly as early as Monday, even as it continues to review broader US policy to the Islamic Republic.

“The Trump administration is currently conducting a comprehensive review of our Iran policy,” a State Department official told Al-Monitor today. “Once we have finalized our conclusions, we will meet the challenges Iran poses with clarity and conviction. The Trump administration has made clear that at least until this review is completed, we will adhere to the JCPOA [Joint Comprehensive Plan of Action] and will ensure that Iran is held strictly accountable to its requirements.”

The State Department last certified Iran’s compliance with the deal April 18. A new certification, which keeps Congress from initiating its own review of whether to reimpose nuclear-related sanctions, has to be made every 90 days.

The Weekly Standard reported Thursday that the second certification under Trump was forthcoming, and that the White House had started calling congressional offices to alert them to the decision. The conservative magazine said the Trump administration expects to finalize its Iran policy review by the end of the summer. It also said Secretary of State Rex Tillerson and Secretary of Defense Jim Mattis have argued for certifying Iran’s compliance, while White House strategy chief Steve Bannon has argued for exiting the deal.

Ahead of the July deadline, four Republican senators — Tom Cotton, R-Ark., Ted Cruz, R-Texas, David Perdue, R-Ga., and Marco Rubio, R-Fla. — wrote to Tillerson this week to urge him not to certify Iran’s compliance. They point to alleged violations of JCPOA-imposed limits on nuclear centrifuges and heavy water stocks, among other things, as evidence that Iran has “consistently violated” the terms of the deal.

America’s European allies, for their part, have pressed the United States to stick with the landmark nuclear deal, which was reached two years ago in Vienna after years of negotiations.

“The JCPOA is not perfect, but it is much, much better than the other options," a senior European official said he and his colleagues have been telling the Trump administration. "The JCPOA is a reasonable way to address the [nuclear] issues. … Let’s implement the JCPOA in a robust manner.”

“The nuclear deal doesn't belong to one country, it belongs to the international community," EU foreign policy chief Federica Mogherini said at a news conference with Russian Foreign Minister Sergey Lavrov in Brussels on Tuesday. "We have the responsibility to make sure that this continues to be implemented."

A group of 38 retired US generals and admirals, meanwhile, wrote an open letter to Trump on Wednesday expressing their strong support for the nuclear deal. The letter asserts that the 2015 agreement had “successfully blocked Iran’s paths to a nuclear weapon and has greatly strengthened the security of the United States.”

The retired senior military officers, writing in a letter organized by the pro-deal group Diplomacy Works, applauded the parties’ compliance with the landmark nuclear deal for the past two years, but acknowledged the dangers posed by Iran’s other troubling behavior in the region, including its ballistic missile program. They urged the Trump administration to pursue diplomatic engagement with Iran as a means of de-escalating tensions.

“We urge your administration to recognize the national security benefits of the nuclear agreement and appropriately weigh the risks to our troops of escalating tensions with Iran,” they wrote. “Opening a communications channel would be a no-cost, high-reward step that will demonstrate US global leadership, save lives and bolster our security at a time of regional and global instability. The only good war is the one you do not fight.”

The certification debate comes as Iran Foreign Minister Mohammad Javad Zarif will be in New York next week for meetings at the United Nations. It was unclear if Zarif would have any encounters with US diplomats while he is in the United States. Asked if Tillerson had spoken with Zarif, State Department spokeswoman Heather Nauert said she did not think so.

“I do not believe that he has,” Nauert told journalists at the State Department on Thursday. “We certainly have various diplomatic channels, lines of communications that can be used” if the United States needs to get a message to Iran.