Lawmakers who once insisted Iran was cheating aren’t taking the administration to task for saying otherwise. 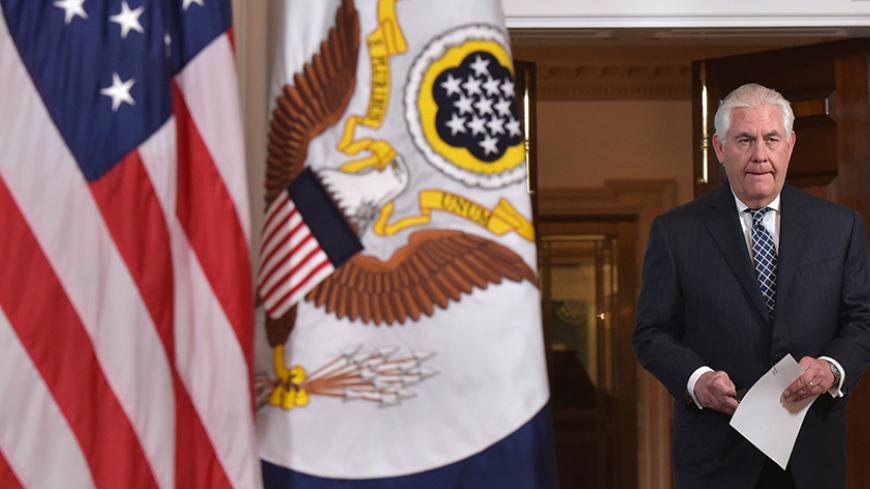 US Secretary of State Rex Tillerson arrives in the Treaty Room to speak about Iran at the State Department in Washington, April 19, 2017. - Mandel Ngan/AFP/Getty Images

US lawmakers who once loudly insisted that Iran was cheating on the nuclear deal stayed quiet April 19 after the Donald Trump administration declared otherwise.

In a letter to House Speaker Paul Ryan, R-Wis., Secretary of State Rex Tillerson said that Iran has been “compliant” through April 18 with its commitments under the 2015 agreement. That assessment tracks with what the UN’s nuclear watchdog, the International Atomic Energy Agency (IAEA), has repeatedly concluded.

Tillerson went on to say that the administration would nevertheless conduct a review of the deal to see if it is in the United States’ national security interest given Iran’s role as a “leading” state sponsor of terrorism. In a subsequent press conference, he said the Joint Comprehensive Plan of Action (JCPOA) “really doesn’t achieve” its objectives because it merely tries to “buy off” Iran for a short period of time. Meanwhile, Iran’s Foreign Ministry sent a report to parliament April 15 stating that Iran had been able to access $3.9 billion in previously frozen assets over the past three months.

The Trump administration’s assessment was greeted with a deafening silence in Congress, which is out of session this week, notably by Iran hawks who had previously said that Iran was already in violation of the deal. The lack of response suggests congressional Republicans, like the Trump administration, are in no rush to tear up a deal and be held responsible for the consequences.

“The letter speaks for itself — nothing to add,” Ryan spokesman Doug Andres told Al-Monitor in an email.

In a December tweet lauding passage of legislation renewing the expiring Iran Sanctions Act, however, Ryan struck a different tone.

“As #Iran continues to violate the nuclear deal, we must maintain the ability to immediately reinstate sanctions,” Ryan tweeted at the time.

Other critics include the chairmen of the House and Senate Foreign Affairs panels, Rep. Ed Royce, R-Calif., and Sen. Bob Corker, R-Tenn., who have both argued that Iran is violating the terms of the agreement by conducting ballistic missile tests that contravene underlying UN Security Council resolutions. Tillerson’s letter confirms that the administration has chosen not to link the nuclear deal to Iran’s missile program, even as it has slapped new sanctions on Iranian individuals and entities tied to the program.

“One of the reasons that I opposed this treaty so strongly is that we gave up all of our leverage on the front end," Corker told his hometown newspaper in November. "To me the best route for the new president to handle this is to push back on the violations that are taking place today."

In an emailed statement, Corker told Al-Monitor that he welcomed the Trump administration's willingness to push back against Iran despite acknowledging that Tehran appears to be in "technical compliance" with the deal.

"Secretary Tillerson made clear that regardless of Iran's technical compliance with the nuclear deal, the administration is under no illusion about the continued threat from Tehran and is prepared to work closely with Congress to push back," Corker said. "It is our hope to also work with the administration to over time move to an agreement that ensures Iran never has the capacity to develop a nuclear weapon."

Royce made similar remarks in response to Iranian accusations that the United States was violating the deal with its passage of the Iran Sanctions Act. “Iran is the one who violated the agreement through its support to terrorism,” Royce said at the time. “Indeed, the quest to develop a missile capable of striking the United States is a direct threat to American national security.”

Other lawmakers insisted that Iran had violated the deal after the IAEA reported that the country was in possession of more heavy water than technically allowed.

“On top of Iran’s illicit development of ballistic missiles, its hostage-taking and its regional aggression, this latest violation is another sign that Iran has been emboldened by President Obama’s concessions and weakness,” Sen. Tom Cotton, R-Ark., said at the time.

Still others pointed to a German intelligence report last year that Iran had attempted to acquire nuclear technology in violation of the deal as cause for concern.

“It is not surprising that now that sanctions relief has been provided, Iran is attempting to violate the agreement,” Rep. Lee Zeldin, R-N.Y., said in July. “The continued denial by the Obama administration and their most loyal political supporters only emboldens the Iranians.”

Sen. Ted Cruz, R-Texas, meanwhile, said in February that the deal was “designed to facilitate cheating” and that Trump should rip it up.

None of those lawmakers’ offices responded to requests for comment about Tillerson’s letter. The deal’s champions, meanwhile, have been much more vocal.

“We welcome President Trump’s recognition that the Iran nuclear deal is working and Iran is upholding its commitments,” the National Iranian American Council said in a statement. “With this certification, President Trump must now uphold the United States’ obligations and renew the sanctions waivers.”

“Facts are stubborn things,” Connolly said. “All of the critics have been proved wrong, which may explain their silence. They all predicted that there’d be cheating, that this would actually expedite Iran as a nuclear threshold country, [and] none of that has come true.”

Connolly said he took solace from Tillerson’s assessment, but raised concerns about his underlying threat to rip the deal up regardless. Better, Connolly said, to deal with Iran’s human rights violations and support for terrorism separately.

“This is kind of having it both ways, it’s fudging — and I think even that fudging could erode the underlying agreement if we’re not careful,” he said.

Sen. Tim Kaine, D-Va., the top Democrat on the Senate Foreign Relations panel on the Near East, shared similar thoughts.

“Senator Kaine supports the JCPOA because it is an improvement over the previous status quo with Iran and believes it should be left in place as long as Iran complies with the terms of the agreement,” a Kaine spokeswoman said in an email. “Senator Kaine supports the strictest enforcement and oversight of the deal, and the IAEA has continued to verify Iran's compliance with the agreement. Senator Kaine also supports continuing to counter Iran's destabilizing behavior and aggression in the region, particularly in places such as Syria and Yemen.”