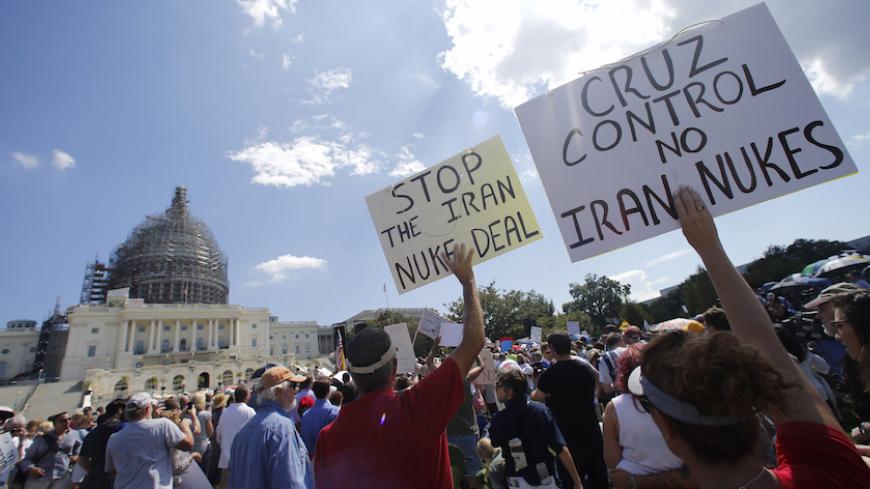 Democrats who supported President Barack Obama's nuclear deal with Iran say it has already defanged that country's nuclear program, and they want their constituents to know about it.

A half-dozen pro-deal lawmakers ranging from liberals to pro-Israel hawks took turns Jan. 27 on the Senate floor touting the deal's early successes and urging critics to help make it stronger. This group effort comes as Republicans highlight recent Iranian actions deemed aggressions, such as the detention of US sailors and a ballistic missile launch.

Sen. Chris Murphy, D-Conn., told Al-Monitor that he and other Democrats “want to start fighting back against Republicans who want to rewrite the agreement.”

“Republicans continually want this agreement to be about something other than preventing Iran from obtaining a nuclear weapon,” said Murphy, the top Democrat on the Senate Foreign Relations Near East panel. “And I don't want us to be sitting around three years from now, with the nuclear agreement having been fully implemented, and the American public thinking the agreement failed simply because Iran is still funding Hezbollah.”

According to Murphy, the deal needs a sales pitch, even after its passage, not unlike Obama's health care law. He predicted such an effort could help Democrats in the 2016 presidential election against Republican candidates who have vowed to terminate the deal on their first day in office.

“The more the American public recognize how successful this agreement is, the less likely they are to support somebody who's going to rip it up,” Murphy claimed. “If we don't tell the story of the successful implementation, arguments to rip up the agreement would have a lot more purchase.”

Opponents of the deal say it will give Iran free rein to rush to a nuclear bomb in 15 years, after sanctions lapse. Most of their recent criticism, however, has focused on the more than $100 billion windfall that Iran stands to gain once sanctions are lifted, which explains their desire to highlight Tehran's unsavory actions. Critics have launched several attempts to either unravel or chip away at the deal in recent weeks, including legislation to restrict sanctions on Iranian banks from being lifted and a new law that stops dual-nationals and visitors to Iran from benefitting from visa-free travel to the United States.

“Today, the Obama administration will begin lifting economic sanctions on the world’s leading state sponsor of terrorism,” House Speaker Paul Ryan, R-Wis., said in a Jan. 16 statement as the United States began meeting its obligations under the deal. “As the president himself has acknowledged, Iran is likely to use this cash infusion — more than $100 billion in total — to finance terrorists. This comes just weeks after Tehran's most recent illegal ballistic missile test, and just days after the IRGC [Islamic Revolutionary Guard Corps] detained ten American sailors. A bipartisan majority in the House voted to reject this deal in the first place, and we will continue to do everything possible to prevent a nuclear Iran.”

Democrats are pushing back by focusing on the progress that has already been made on the nuclear front. Sen. Cory Booker, D-N.J., touted an “extraordinary victory for diplomacy in taking the specter of a nuclear-armed Iran and evaporating it, eviscerating it, pushing it back at least 15 years.”

“In order to get there some pretty extraordinary things have happened,” Booker said on the Senate floor. “Virtually all of its [uranium] stockpile has been shipped out of the country. Two-thirds of the Iranian centrifuges have been taken off-line … In addition to that, we've done the blocking of the plutonium pathway. The heavy-water reactor in Arak has been filled with concrete; it's no longer operational.”

Sen. Tim Kaine, D-Va., contrasted the Joint Comprehensive Plan of Action (JCPOA) with the lack of good intelligence about Iraq's nuclear program prior to the US invasion. “We went to war based on a faulty assessment — we didn't have the information we needed,” Kaine said. “Let's contrast what happened in 2002-2003 with the opportunity we now have before us as a result of the JCPOA.”

Iran, he commented, is locked into an inspection regime more stringent than that imposed on any other nation. “It will provide us with significant intelligence about Iran's nuclear program,” Kaine said.

Others asserted that Republicans could help restrain Iran by making sure the International Atomic Energy Agency (IAEA) is fully funded and Obama's national security nominees are quickly approved.

Sen. Chris Coons, D-Del., who called the group together, lambasted an effort led by Rep. Ryan Zinke, R-Mont., to link IAEA funding to the disclosure of its confidential monitoring agreements with Iran. Coons said he is working with lawmakers and the White House to try to secure a “long-term, reliable source of funding” for the IAEA's monitoring activities in Iran, which the agency has pegged at more than $10 million per year.

“You can't sound like a hawk around the debate over the JCPOA,” Booker said, “and then sound like a chicken when it comes to putting the funding forward necessary to prevent them from engaging in destabilizing activities in the region."

Sen. Bob Casey, D-Pa., also defended the deal while calling on Democrats and Republicans to work to make sure it is enforced.

Recent polling suggests Democrats have a tough road ahead wit​h a US public that appears both skeptical and misinformed about the deal. A CNN/ORC poll conducted Jan. 21-24 found that 69% of Americans favor diplomacy with Iran — but 52% oppose lifting sanctions even though Iran has complied with its nuclear obligations under the JCPOA.