Congress blows up over the administration's refusal to endorse renewal of the expiring Iran Sanctions Act. 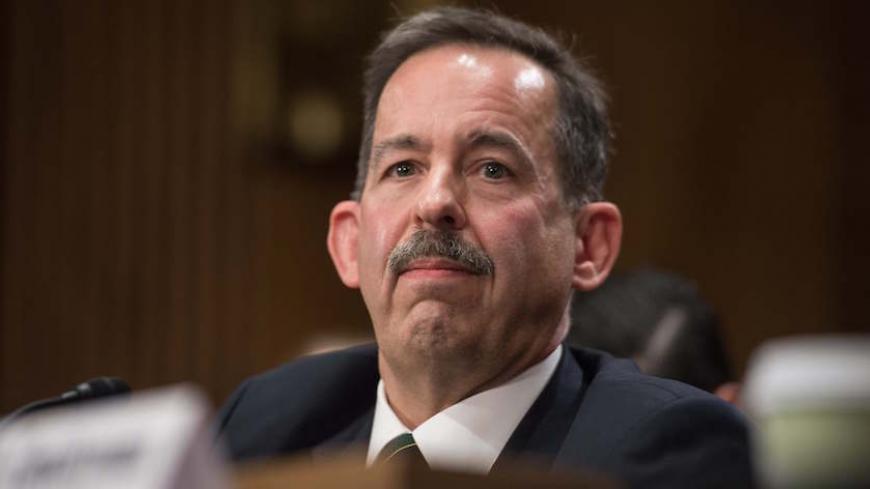 The Obama administration has spent months suggesting it would support a key Iran sanctions bill when the time is ripe.

In back-to-back appearances May 25 in the House and Senate, the State Department's point man on implementation of the nuclear deal flatly declined to endorse renewal of the Iran Sanctions Act (ISA) before it expires in December. Lawmakers on both sides of the aisle say the secondary sanctions on Iran's energy sector give the administration international penalties to "snap back" to if Iran reneges on its obligations under the deal, but the administration disagrees.

"Having the ISA in place or not is not necessary for snapping back. We have sufficient authority through various executive orders," Stephen Mull told the Senate Banking Committee. "The administration is ready to work with the Congress on [reauthorization]. We would have to see what form it would take. ... There have been various, slightly different variations in how it would be renewed, so we would certainly be willing to have that conversation."

The evasive response infuriated Iran deal skeptics on both sides of the aisle after they repeatedly asked Mull about his views on a straight-up extension of the current law. Some accused the administration of a bait-and-switch to help sell the deal to Congress.

"You seem very wishy-washy, as you have been in multiple settings. And it's very off-putting," said banking panel member and Senate Foreign Relations Committee Chairman Bob Corker, R-Tenn. "Either you support the Iran Sanctions Act being extended, or you don't."

Sen. Robert Menendez, D-N.J., the co-author of pending legislation to extend the current law by 10 years with a few extra reporting requirements, also grilled Mull. Menendez asked if straight-up reauthorization would be a violation of the nuclear deal, prompting Mull to answer, "We would have to look at that at the time that it was submitted."

"That contravenes everything that we were told at the Senate Foreign Relations Committee," Menendez replied. "I cannot fathom for the life of me how we don't embrace authorizing it as it is so that at the end of the day the Iranians know that if in the out-years [of the deal] there is any violation, there is immediate snap-back to the most significant sanctions that exist."

During and immediately after passage of the nuclear deal, administration officials urged lawmakers not to immediately reauthorize the sanctions law so as to avoid needlessly antagonizing the Iranians. That argument has lost any traction, however, as Congress quickly burns through its few remaining legislating days in this election year.

"We absolutely support renewal of the ISA," a senior official told Politico in August 2015. “It’s an important piece of legislation, and we want to discuss renewal with Congress in a thoughtful way at the right time."

The administration denies any flat-out change of heart.

"We remain committed to working with Congress," State Department official Sam Werberg told Al-Monitor in an emailed statement, "and are willing to discuss how to further foreign policy priorities in a manner that does not jeopardize JCPOA [Joint Comprehensive Plan of Action] implementation."

Mull had similar exchanges with the House Foreign Affairs Committee earlier in the day, when he was also repeatedly pressed on the law's extension. Lawmakers across the ideological spectrum — from nuclear deal cheerleader Gerry Connolly, D-Va., to hard-core opponent Lee Zeldin, R-N.Y. — told Al-Monitor that the May 25 hearing was the closest they'd heard the administration come to opposing the Iran Sanctions Act's reauthorization.

"The awful attempts at non-answers just leave everyone wondering what their real motives and plans are," Zeldin said.

Mull's job is implementation of the Iran deal, while any larger decisions about whether to support or oppose sanctions legislation lie squarely with the White House. He may have sought to avoid committing to a course of action that's ultimately outside his wheelhouse.

In addition, some lawmakers have made no secret of trying to use the Iran Sanctions Act renewal, which will likely be a relatively easy sell in Congress, to tack on extra measures. Still, few seemed to buy Mull's apparent argument that the mere possibility of such an outcome should preclude him from supporting a clean reauthorization.

"I don't think that's a valid concern," House Foreign Affairs member and nuclear deal opponent Brad Sherman, D-Calif., told Al-Monitor. "That's like saying you can't be in favor of apples because somebody may turn it into a pumpkin. If you're endorsing apples, you're not endorsing pumpkins."

While there's broad agreement in Congress that the Obama administration may be uncomfortable with anti-Iran legislative activity post-deal, the conclusions drawn have a partisan tilt.

Zeldin suspects the White House would like nothing more than to see the legislation expire.

"The impression that I got was that the White House is playing a game where they want the Iran Sanctions Act to expire at the end of the year and then be able to blame Congress," he told Al-Monitor.

"The continued reluctance to reauthorizing the Iran Sanctions Act is a prime example of how the White House’s Iran policy amounts to walking on eggshells," Royce told Al-Monitor in an emailed statement. "Extending this act is essential to keep the pressure on Iran and ensure that Congress, not the president, has the final say on sanctions relief.”

Sherman by contrast believes the Obama administration would perhaps prefer that the bill's sanctions authorities endure, just without a noisy congressional debate that would surely upset Tehran.

"If it somehow happened automatically, if there was a bill that said that any law passed on such-and-such a date shall last four more years, I don't know if they'd oppose it," Sherman said. "If it somehow just happened, they might be happy. But the idea of us actually passing it doesn't bring them great joy."