Opponents of the nuclear agreement have so far failed to gain much traction during the summer recess. 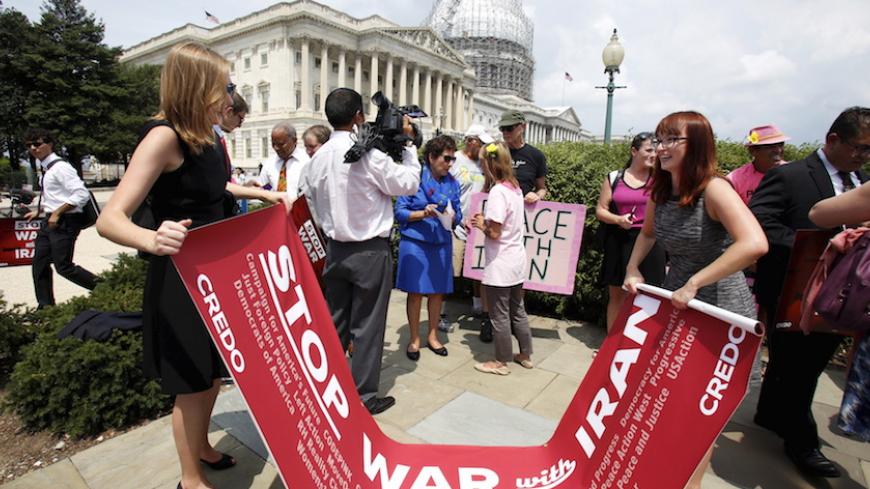 Activists prepare to leave after delivering more than 400,000 petition signatures to Capitol Hill in support of the Iran nuclear deal in Washington July 29, 2015. - REUTERS/Yuri Gripas

Partway through the five-week summer recess, opponents have failed to gain much traction despite spending millions of dollars on ad campaigns targeting on-the-fence lawmakers. As of the morning of Aug. 14, only one Democrat in the Senate and 11 in the House had declared their opposition to the deal, leaving Republicans well short of the two-thirds majority they would need in both chambers to override the president’s veto.

Congress has until Sept. 17 to vote on a resolution of disapproval under bipartisan legislation that passed in May. If lawmakers are successful, the White House would be barred from lifting statutory sanctions against Iran, in violation of the international agreement that was reached between Tehran and six world powers July 14.

Advocates of the deal suffered a series of blows early in the month that sent them reeling.

Schumer’s defection was particularly notable since he’s the heavy favorite to take over as Democratic leader of the Senate when Harry Reid, D-Nev., retires at the end of 2016. He’s also the first — and so far only — Senate Democrat to publicly side against the deal. (Sen. Robert Menendez, D-N.J., a senior member of the Senate Foreign Relations Committee and longtime Iran hawk, is expected to announce that he also opposes the deal during a speech Aug. 16.)

The White House responded aggressively, with spokesman Josh Earnest calling Schumer’s decision “disappointing” and suggesting it could disqualify him as a party leader.

“It doesn't change that we will be able to mobilize a substantial majority of Democrats in the House and Senate in support of the deal and, if necessary, to sustain the president's veto," Earnest added at a press briefing the day after the announcement.

Indeed, the hemorrhage feared by some Iran deal backers did not materialize.

Schumer was quick to reassure liberals that he would not try to convince his fellow senators to vote against the deal. On Aug. 13, a week after his announcement, two more Senate Democrats — Al Franken, a Jew from Minnesota, and Jon Tester of Montana — announced their support.

The White House needs 34 votes in the Senate to sustain the deal, and likely already has 27, according to a whip count from The Hill. It assiduously courted Sen. Jeff Flake, R-Ariz., who recently traveled to Africa with the president and to Cuba with Secretary of State John Kerry and whose backing would have enabled the White House to claim bipartisan support for the deal. However, Flake came out against the Iran deal Aug. 15.

The White House also feels confident that it has a firewall in the lower chamber.

Obama needs 145 House members to sustain a veto, and so far none of the 151 Democrats who signed a letter endorsing the negotiations back in May has changed position. To make sure that doesn’t happen, current and former Democratic members of the House intelligence panel wrote to their colleagues on the House Democratic Caucus on Aug. 13 to reassure them that monitoring of Iran would “intensify” under the deal.

Deal backers also take solace from recent polling that suggests broad support for the deal among American Jews. The opposite is true among Jews in Israel.

A number of foreign policy experts have also come out in support of the deal in recent weeks.

On July 21, 60 former national security leaders of both parties endorsed the deal. And former Defense Secretary Robert Gates, a Republican, last week urged lawmakers to “swallow hard, acknowledge our negotiators got out-negotiated, acknowledge we have a flawed deal and make the best of it.”

Deal skeptics lost another battle this past week when the head of United Against Nuclear Iran, a pressure group spending millions to oppose the deal, resigned because he supports the agreement. Gary Samore, a former nuclear adviser to Obama, was promptly replaced by hawkish former Sen. Joe Lieberman.

The critics haven’t abandoned the fight.

During a trip to Israel earlier this month, a congressional delegation of 22 House Democrats reportedly got an earful from Israeli leaders of all stripes about the dangers of the deal. Prime Minister Benjamin Netanyahu took time out of his busy schedule to personally speak to them for 90 minutes Aug. 9, even as he pointedly said that he wasn’t telling them how to vote.

Signs, however, are starting to appear that Israelis and Republicans have already concluded that they’re fighting a lost cause.

Netanyahu privately may have all but given up on any hope on killing the deal through Congress, Haaretz reported Aug. 14. And US lawmakers are already gearing up for the next big fight.

Senate Foreign Relations Chairman Bob Corker, R-Tenn., was already laying the groundwork to renew expiring sanctions legislation before the Senate left town. Those sanctions wouldn’t apply as long as Iran abides by the deal, but the Obama administration says passing such a bill could cause problems for the agreement.

“Let's say the administration is victorious and this moves on — I think there's going to be a huge pent-up demand on both sides of the aisle, 30 or 60 days after the fact," Corker told reporters on Capitol Hill on Aug. 5. "If you don't extend [the Iran Sanctions Act], you have nothing to snap back [if Iran violates a deal]."

And Sen. Lindsey Graham, R-S.C., the chairman of the Senate foreign aid panel and a long-shot presidential candidate, vowed Aug. 13 to cut funding for the UN’s atomic watchdog agency if its confidential monitoring agreement with Iran isn’t shared with Congress.

“Given anticipated legislative action on this controversial deal in the Senate next month, firsthand information on IAEA side agreements are vital to both the debate and decision making process for all Members — irrespective of their views of Iran or the merits of the deal,” Graham wrote in a letter to Kerry. “As an indication of how serious I view the provision of copies of these side agreements to our national security, I intend to condition and/or withhold voluntary contributions to the IAEA in fiscal year 2016 should they not be provided prior to the congressional debate next month.

Following through on such a threat, ironically, could make it easier for Iran to cheat on the nuclear agreement.