Despite tensions over the Paris climate change accord, the two leaders have common interests in the Middle East. 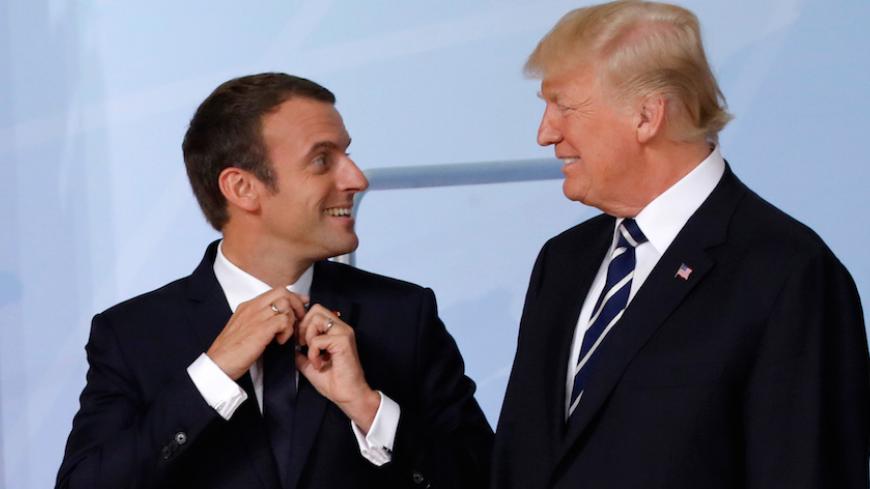 WASHINGTON — After disappointing France with his rejection of the Paris climate agreement, US President Donald Trump may be looking for something of a reset when he meets with French President Emmanuel Macron in Paris. Both leaders have agreed to focus on areas of common interest, including fighting terrorism and trying to stabilize Syria, when they meet Thursday afternoon.

The two leaders met for the first time on the sidelines of the NATO summit in Brussels in May, where they were photographed awkwardly challenging each other on the strength of their handshake. Trump’s subsequent rejection of the global climate deal further chilled fledgling relations between the two men, which were already strained by Trump’s praise for Macron’s far-right opponent, Marine Le Pen.

But the two men have spoken on the phone since, as well as on the sidelines of the G-20 summit in Hamburg, Germany, last week. Trump has also expressed his love of Paris and France, French officials said today.

So France was pleased when Trump accepted Macron’s invitation to attend the July 14 Bastille Day celebrations Friday that coincide with the centenary of the United States’ entry into World War I. Trump will be the first US president to attend France’s national day celebrations since George H.W. Bush in 1989, the officials said.

After an embassy meet-and-greet Thursday morning, the president and first lady Melania Trump are scheduled to get a tour of Napoleon’s tomb and the French National War Museum from Macron and his wife. Trump and Macron will then meet one-on-one, and subsequently with their senior advisers, for about an hour and 15 minutes, White House officials said. The Macrons will then host the Trumps at a private dinner at chef Alain Ducasse's restaurant, Le Jules Verne, located inside the Eiffel Tower.

“The meeting will focus on Syria and counterterrorism topics,” a senior White House official said at a background briefing Tuesday. “We also anticipate the two presidents, in the introductory one-on-one meeting, will also share perspectives from the recent G-20 meeting.”

“We expect most of the discussion to focus on what's going on in Syria right now, and then the French and American cooperation both inside the alliance … and counterterrorism issues not only in Syria, but in other places,” the White House official said.

“And then, after the one-on-one session, they will move into a group session where their senior advisers will come in and they'll get on with the more formal agenda,” he added.

Trump and Macron will discuss “all topics of common concern, especially our fight against terror and the war in Syria,” French Ambassador to the US Gerard Araud tweeted today.

While Trump and Macron differ on climate change, they share the top priority of the need to protect their citizens from terrorism. France has suffered several terrorist attacks in the past couple of years, notably by French Islamic State (IS) supporters.

There is a “big consensus” between the United States and France that fighting terrorism is “priority No. 1,” a senior French official, speaking not for attribution, said today. “The US’ continuing effort against terrorism, especially in the Middle East, is of paramount importance to us.”

With Mosul close to being fully liberated from IS and the operation to clear Raqqa underway, “the challenge for us is clear,” the French official said. “France and the US agree very much, we cannot afford to stop.”

After Mosul and Raqqa, the United States and France agree on the need to avoid “coalition fatigue.”

“We need to make sure this fight versus Daesh [IS] will continue,” the French official said. “Everybody understands the fight [will go on] for a generation.”

On Syria, Europe is looking for the Trump administration to get more engaged in efforts to seek a political transition. An eighth round of UN-brokered talks between the Syrian regime and opposition got underway in Geneva on Monday, but progress toward a political solution is slow.

Russia remains reluctant to press the regime of Syrian President Bashar al-Assad to make real political concessions, diplomats said. The United States and Europe, in turn, have said they won’t be financing postwar reconstruction and stabilization in Syria while it remains under Assad’s control.

“If we want to resolve the situation in Syria, you will have to find a way to resolve the issue of governance … in some more open manner, some kind of devolution of power,” a senior European official, speaking not for attribution, said. “Everyone is trying to engage the Russians. … There are solutions on the table … but I think we are not there yet.”

On Assad, “we have to be realistic,” the European official said. “Assad staying in power long term is probably not sustainable. … It is just a fact, if he remains in power, stability will never resume.” But since Aleppo fell to the regime late last year, “the countries pushing for a full, comprehensive political transition are not really in a position to impose it,” he said. “We have to be realistic, to go step by step.”

“If [the Russians are] not ready to squeeze the regime to negotiate, we will not finance postwar reconstruction,” the senior European official said. “We need a credible process, a road map.”

"The nuclear deal doesn't belong to one country, it belongs to the international community," EU foreign policy chief Federica Mogherini said at a news conference with Russian Foreign Minister Sergey Lavrov in Brussels on Tuesday. "We have the responsibility to make sure that this continues to be implemented."

“The JCPOA is not perfect, but it is much, much better than the other options," the senior European official said. "The JCPOA is a reasonable way to address the [nuclear] issues. … Let’s implement the JCPOA in a robust manner.”

The same official said that you cannot mix the nuclear issue and the JCPOA "with all the other issues … because if we had done so, we would never have concluded the deal. The second critique we hear is, ‘The JCPOA does not address everything. Let’s address all the issues in Iran in parallel.'"

by Murielle KASPRZAK and Joseph SCHMID | AFP | May 26, 2022
END_OF_DOCUMENT_TOKEN_TO_BE_REPLACED