Europeans: Trump can win on Iran without ending nuclear deal

Envoys to Washington say trans-Atlantic cooperation against Tehran needs to build on the 2015 nuclear accord, not undermine it. 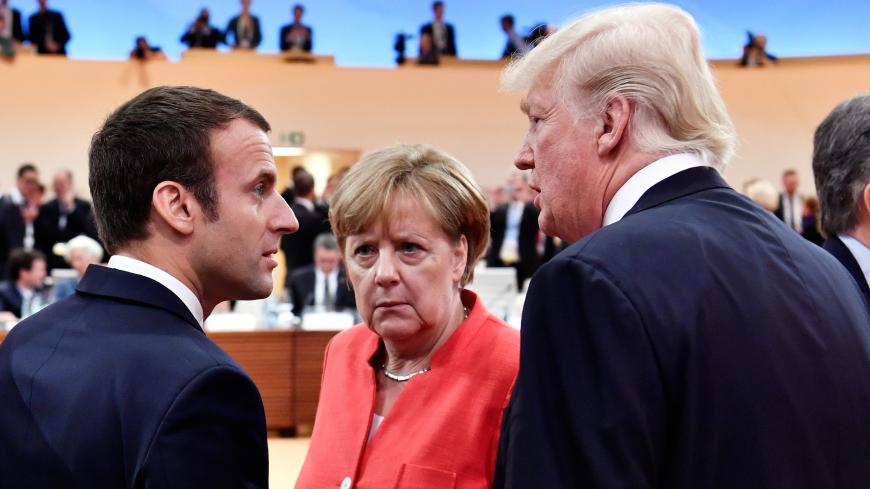 WASHINGTON — European envoys to the United States said today that US President Donald Trump has already succeeded in changing the conversation on Iran and that he doesn’t need to rip up the nuclear deal.

“In a sense, this administration has changed the climate on Iran,” British Ambassador Kim Darroch said at a panel of four European ambassadors at the Atlantic Council. “It is succeeding. … But let’s keep the JCPOA [Joint Comprehensive Plan of Action].”

Darroch said he has noticed an intensification of contacts over the past couple of months between the Europeans and experts within the US administration on how to increase the pressure on Iran. The Western allies broadly share Washington’s concerns about Iran’s support for militant proxy groups in the region such as Lebanon’s Hezbollah and Yemen’s Houthi rebels, Iran's support for the regime of Syrian President Bashar al-Assad and Iran's ballistic missile testing.

The ambassadors from France, the United Kingdom, Germany and the European Union spoke ahead of an Oct. 15 deadline for Trump to certify to Congress whether the Iran nuclear deal advances US national security interests. Trump has hinted he is unlikely to do so. If he decertifies, Congress has 60 days to decide whether to vote to reimpose nuclear-related US sanctions waived under the accord in exchange for Iran’s rollback of its nuclear program.

The European envoys said Trump’s certification decision is technically a domestic American issue. Their concern is if the US reimposes sanctions, that would be a material breach of the deal that threatens to unravel it.

Whether or not Trump certifies next month is “basically a domestic issue,” French Ambassador Gerard Araud said. “What matters will be the consequences. We are not going to criticize the president for certification or decertification. That is your problem.”

All parties, even the Trump administration, have previously acknowledged that Iran is technically complying with the deal. The European envoys warned that Washington’s threat to undermine the accord, which Iran is widely seen as honoring, could have devastating strategic consequences for nuclear nonproliferation around the world, including efforts to try to reach a diplomatic solution to the North Korean nuclear threat.

“Reopening the negotiation is a non-starter,” Araud said. “There is also a question of credibility. How do we get an agreement with North Korea if we renege on our agreements?”

German Ambassador Peter Wittig warned that the six world powers that reached the nuclear deal with Iran after years of complex and grueling negotiations would not pull together again if the United States leaves now.

“We can never get a deal with this group of countries again,” Wittig said. “Anyone thinking that is just dreaming.”

The European envoys said the Trump administration does not need to threaten to reimpose sanctions or gin up a crisis to get them to discuss prospects for dealing with Iran’s other destabilizing actions. But they stressed that collaboration to address those threats needs to build on the 2015 nuclear accord, not undermine it.

One tool the Europeans use to raise their concerns with Iran is dialogue, they said.

“We share a lot of the American concerns about Iran’s regional behavior,” Germany’s Wittig said. “What had not been mentioned is, we are talking with the Iranians about that in a pretty robust way. We have contacts across the board with a pretty diverse spectrum of Iranian society. We all have embassies there.”

Iranian President Hassan Rouhani, asked by Al-Monitor if Iran would be open to possible talks on an additional or follow-on accord, insisted Iran won’t renegotiate the JCPOA, but is always happy to talk.

“It is the JCPOA in its current form. End of the story,” Rouhani said at a press conference in New York last week. “It must be implemented as such.”

“So for the Europeans to tell America to remain in the JCPOA in exchange for convincing and bringing Iran to the table to negotiate about other topics?” Rouhani said. “That is not founded in reality.”

“Now the JCPOA is being implemented,” Rouhani said. “If our friends in the European Union are keen on speaking with us about something, we are happy to talk with them about anything. We speak with them on a daily basis. … We have no issue with speaking or talking about one [thing or] another. But never can the JCPOA be a condition or precondition to or for anything.”