Former Israeli National Security Adviser Uzi Arad urges Washington to build on the 2015 Iran nuclear accord rather than abandon it. 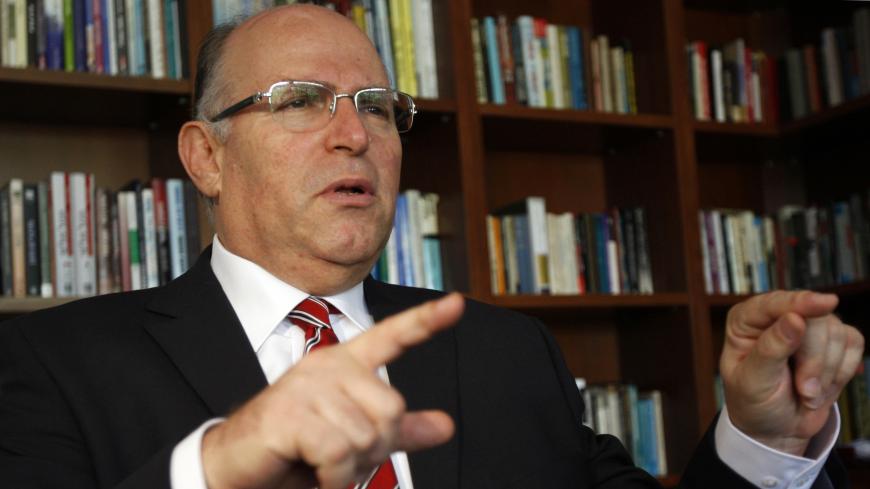 Uzi Arad speaks during an interview with Reuters in Tel Aviv, March 12, 2009. At the time, Arad was a senior adviser to Benjamin Netanyahu, then Israel's prime minister-designate. Arad, a two-decade Mossad veteran, was Netanyahu's national security adviser from 2009-2011. - REUTERS/Gil Cohen Mage

WASHINGTON — Former Israeli National Security Adviser Uzi Arad is urging Washington to build on the 2015 Iran nuclear deal rather than abandon or undermine it.

“My position is in support of preserving the agreement and strengthening the agreement,” Arad said on a call Monday hosted by the liberal Jewish-American group J Street, ahead of a week of events in Washington urging members of Congress and the Donald Trump administration to work with allies to address what comes after certain provisions in the Joint Comprehensive Plan of Action (JCPOA) expire in a decade.

“Doing away with the agreement is no real option,” said Arad, who served as national security adviser to Israeli Prime Minister Benjamin Netanyahu during 2009-2011. “It simply removes from existence something that had been established, that presented certain assets and certain things that are tangible — and replacing that [with] nothing.”

Arad’s presentations this week in Washington come ahead of an Oct. 15 quarterly deadline for Trump to certify to Congress that Iran is complying with the nuclear deal. Trump hinted at diplomatic meetings in New York last month that he is unlikely to do so. If Trump declines to certify, Congress has 60 days to decide if it should vote to reimpose US sanctions suspended under the deal in exchange for Iran’s rollback of its nuclear program.

The Trump White House, asked about Arad’s contention that building on the deal was better than abandoning it, said it considers the deal negotiated by six world powers and Iran during the Barack Obama administration as deeply flawed.

“This administration believes strongly that the deal is bad for the US,” a White House official, speaking not for attribution, told Al-Monitor on Monday. “In particular, the sunset clauses, inadequate inspections provisions and lack of coverage of the full array of Iran’s malign activities make the deal fundamentally flawed.”

“The Trump administration is fully committed to addressing the totality of Iranian threats and malign activities and seeks to bring about a change in the Iranian regime’s behavior,” a State Department official, speaking not for attribution, told Al-Monitor.

But the former Netanyahu national security adviser, a two-decade veteran of Mossad, said that the 2015 nuclear accord had clear tangible benefits for Israeli and international security and that Iran, to date, had honored its strict terms.

“Iran has indeed done away with those things that it committed itself to do away with,” said Arad, who is now a professor at Israel’s Technion University and fellow at the Institute for National Security Studies think tank. He said he was speaking for himself and not on behalf of the Israeli government.

He said, “It reduced inventories, it removed some of the centrifuges, it blocked the plutonium route. It undertook all kinds of restraints, quantitative and qualitative restraints, on its nuclear program. In doing so, it stopped the progression. It stopped the advance toward nuclear weapons. That is tangible, and that is good.”

The agreement also established “a legal edifice of yardsticks, goals, purposes, obligations that are very useful to uphold,” Arad said. “Now, if you take that away, you are in a void.”

Arad also said that while the agreement may have room for improvement, he saw no serious alternative US strategy at all for what to do to prevent Iran from pursuing nuclear weapons capability if Washington abandons the deal.

“Near as I can tell, there is no serious contingency plan what to do in service of the goal not to have nuclear weapons in the hands of Iran through the abrogation of the agreement,” said Arad. “So it is not a full-fledged option.”

Washington’s European allies have urged the Trump administration to keep the JCPOA and said it cannot be renegotiated. But they have proposed that if the United States honors the deal, they would be willing to work with the Trump administration to try to address other concerns it has about Iran, including Iran’s support for military proxy groups in the region and its testing of ballistic missiles.

Arad said Washington needed to keep consensus with its European allies to most effectively use the time provided by the JCPOA to address longer-term threats.

“Improve the verification, improve implementation, clarify ambiguities,” Arad argued. “Do it, strengthen it … and [do] not take it away, because in its absence you will be simply clueless as to what to do and you may end up losing in the process.”