Even as Iran hawks complain they are shut out from the White House, proponents of the nuclear deal are not confident they will prevail with the president. 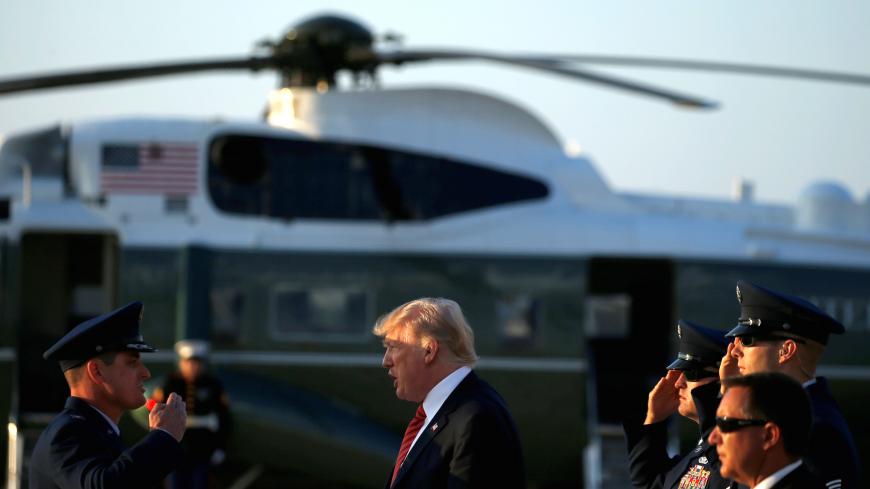 US President Donald Trump is greeted by military personnel as he arrives at Joint Base Andrews, Maryland, United States, Aug. 23, 2017. - REUTERS/Joshua Roberts

WASHINGTON — Critics and defenders of the nuclear deal with Iran are equally in the dark about President Donald Trump’s intentions ahead of the next congressionally mandated deadline to certify Tehran’s compliance Oct. 15.

The arrival of White House Chief of Staff John Kelly a month ago, combined with the subsequent departure of Trump’s chief strategist Steve Bannon, his bombastic deputy Sebastian Gorka and several hawkish National Security Council officials aligned with Bannon, have reduced access to the president for those advocating outright abandoning the deal. Kelly, a retired four-star Marine general, has imposed strict protocols, requiring that any information going to the president be submitted first for review by White House staff secretary Rob Porter. Kelly has also stopped the Oval Office open-door policy, limiting who can gain access to the president’s ear.

A senior White House official told Politico that Kelly's goal is essentially that the “president has to get good briefings, he has to get good intelligence.” The official said, “We have to be putting him in a position to make good decisions.”

Indeed, former US Ambassador to the UN John Bolton this week complained in an article outlining his plan for quitting the Iran nuclear deal that he had been denied permission to present his proposal to Trump.

“I offer the Iran [proposal] now as a public service, since staff changes at the White House have made presenting it to President Trump impossible,” Bolton wrote in National Review. “Although he was once kind enough to tell me ‘come in and see me any time,’ those days are now over.”

According to Bolton, Bannon had asked him in late July to draw up a “game plan” for how Trump could exit the nuclear deal. Bolton’s plan calls for the United States not only to pull out of the agreement and reimpose unilateral US sanctions on Iran, but also to provide bunker-busting bombs to Iranian foes such as Israel. Bolton also encourages “resistance” to the current regime through support to ethnic minorities, including the Kurds and Baluchis, as well as the “democratic Iranian opposition” such as the People’s Mujahedeen of Iran, formerly a State Department-designated terrorist group.

But even as Iran deal critics and regime-change proponents find themselves stymied in their efforts to access Trump, more pragmatic foreign-policy hands and Iran deal proponents are far from confident that their views will prevail. Washington’s European allies are similarly uncertain about how Trump will proceed, even as they insist that their commitment to the 2015 deal remains firm.

“Things are getting worse,” Richard Nephew, a former member of the US nuclear deal negotiating team, told Al-Monitor. According to his discussions with US government contacts, Trump “has become stuck in his view that the deal needs to go, that Iran is cheating on it, and that we need to have the appropriate response.”

Nephew, now with Columbia University, said he estimates that there is a 50/50 chance decertification will happen in October. But even if Trump does recertify Iran’s compliance, confidence that he will stick to the agreement over time will remain low, inhibiting the economic relief and international investment that Iran feels entitled to under the deal.

In a clear warning to Washington, European Union foreign policy chief Federica Mogherini said this week that the 28-member bloc would defend the Iran deal from possible US efforts to gin up phony and politicized claims that Iran is not complying with the accord.

“So today, two years on, compliance with the deal is certified by the IAEA [International Atomic Energy Agency] … not by one single individual country,” Mogherini said in a speech to EU ambassadors Monday. “And we will have to repeat it time and again in these months to come everywhere.”

Mogherini added, “I was glad to hear at the beginning of this month from the re-elected president of Iran, [Hassan] Rouhani … his personal commitment to continue to implement their part of the deal.”

“There is no alternative” to the Iran nuclear agreement, French President Emmanuel Macron told French ambassadors Tuesday. “In the context of what we are living through, the 2015 agreement is what allows us establish a constructive and demanding dialogue with Iran.”

“France will not support or acquiesce to [the Iran deal’s] cancellation,” France’s ambassador to Washington Gerard Araud said Tuesday on Twitter.

As pdt @EmmanuelMacron said today : there is no alternative to the JCPOA. France will not support or acquiesce to its cancellation. https://t.co/Ijfk1sOySv

France is also indicating to the Trump administration that it would be willing to try to negotiate a follow-on agreement with Iran that also addresses the country’s ballistic missile program, presumably under the condition that the United States not exit the existing deal.

Macron indicated Tuesday that the Joint Comprehensive Plan of Action (JCPOA) “could be supplemented by work for the post-2025 period (and) by an indispensable work on the use of ballistic missiles," French Foreign Ministry spokeswoman Agnes Romatet-Espagne told reporters at a briefing today. "This work could be the object of future consultations with our partners.”

The next IAEA report on Iran’s compliance with the JCPOA is expected to be distributed to member states of the IAEA board Friday, said Kelsey Davenport of the Arms Control Association. The next IAEA board meeting is scheduled for Sept. 11 through Sept. 15, shortly before world leaders head to New York for the opening session of the United Nations General Assembly. Trump is expected to address the gathering Sept. 19.

Iran and Russia have also reportedly requested that a ministerial meeting of the seven nations that negotiated the deal be held on the sidelines of the UN General Assembly. If it occurs, it would mark the first meeting between US Secretary of State Rex Tillerson and Iranian Foreign Minister Mohammad Javad Zarif. The State Department did not indicate whether Tillerson would be open to attending such a meeting, which does not appear to have been formally scheduled yet.

Nephew said the one foreign leader he thought could possibly influence Trump on the merits of the Iran deal was Russian President Vladimir Putin, but the former US negotiator isn’t sure whether Putin is highly motivated to do so.

Nephew said, “The one question that does kind of remain — is there an international leader out there whose views [Trump] trusts who is in a position to convince him otherwise? The only name I heard … was Putin.”

Russia is indeed urging the US administration to stay in the deal, Russian Deputy Foreign Minister Sergey Ryabkov said this week.

“Russia is currently working on persuading the US leadership to keep the … Joint Comprehensive Plan of Action,” Ryabkov was quoted as saying by Sputnik on Tuesday. “We are focusing our efforts … on convincing our partners in the US government that they need to fulfill their duties under Iran’s nuclear deal.”

In the meantime, officials who work on Iran issues expect they may have to cancel any social plans they have made for the evening of Oct. 15.