President Donald Trump's announcement that he will not be certifying the Iran nuclear accord was met with domestic and international criticism. 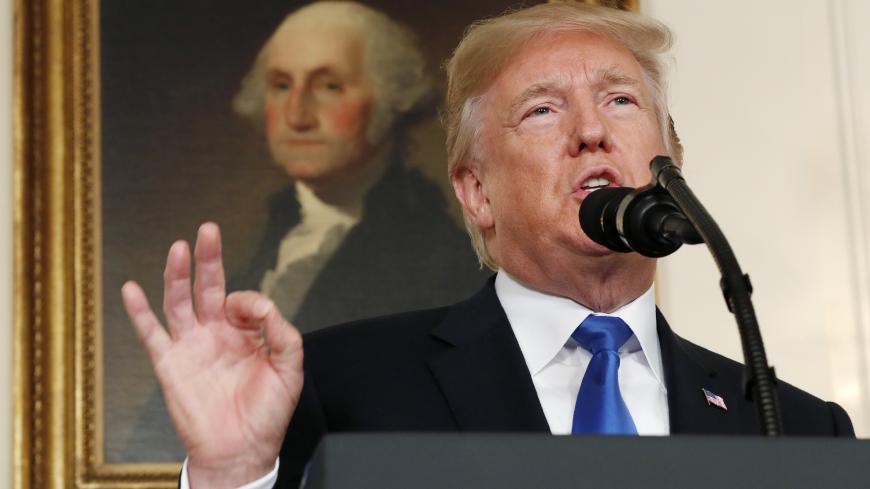 US President Donald Trump speaks about Iran and the Iran nuclear deal in front of a portrait of President George Washington in the Diplomatic Room of the White House, Washington, Oct. 13, 2017. - REUTERS/Kevin Lamarque

WASHINGTON — As he had been signaling for weeks, President Donald Trump announced Friday that he would not be certifying that the 2015 Iran nuclear deal meets congressional requirements, though he stopped short of withdrawing the United States from the arms control pact. Instead, Trump said he was urging Congress to amend legislation overseeing the deal to also target Iran’s ballistic missile program and threaten sanctions if Iran expands its enrichment capacity when certain provisions in the accord “sunset,” permitting it to do so after a decade.

The widely anticipated decision to withhold certification, over technical legislative grounds rather than any claim that Iran was not abiding by the accord, gives Congress 60 days to decide if it will reimpose US nuclear-related sanctions suspended under the deal in return for Iran’s rollback of its nuclear program.

European leaders expressed alarm at the step, and several members of Congress, including some who opposed the deal two years ago, said Trump had defied the recommendation of his own top generals and advisers in putting the fate of a nuclear deal that they concede is working into uncertainty.

“President Trump’s own secretary of defense and chairman of the Joint Chiefs of Staff, Gens. [James] Mattis and [Joseph] Dunford, both said that it’s in our national security interest to keep the [Joint Comprehensive Plan of Action (JCPOA)] in place and I agree,” Senate Minority Leader Chuck Schumer, D-N.Y., who voted against the deal in 2015, said in a statement Friday. “I believe Congress, both Democrats and Republicans, will heed their recommendation.”

“Failing to certify the deal is a risky gamble,” Engel continued. “Our allies and adversaries alike will see this as a signal that the United States doesn't live up to our commitments. … I have to ask: What major power will trust our word on potential North Korean nuclear negotiations?”

“Preserving the JCPOA is in our shared national security interest,” British Prime Minister Theresa May, French President Emmanuel Macron and German Chancellor Angela Merkel said in a joint statement Friday. “We encourage the US administration and Congress to consider the implications to the security of the US and its allies before taking any steps that might undermine the JCPOA, such as re-imposing sanctions on Iran lifted under the agreement.”

But Trump said his new Iran strategy would seek to target a broad range of Iran’s destabilizing behavior in the region as well as its support for militant proxies and its ballistic missile program.

“First, we will work with our allies to counter the regime’s destabilizing activity and support for terrorist proxies in the region,” Trump outlined in a speech in the White House diplomatic reception room Friday.

“Second, we will place additional sanctions on the regime to block their financing of terror,” he said. “Third, we will address the regime’s proliferation of missiles and weapons that threaten its neighbors, global trade and freedom of navigation. And finally, we will deny the regime all paths to a nuclear weapon.”

Trump also directed the Treasury Department to further sanction under a new executive order Iran’s Islamic Revolutionary Guard Corps (IRGC) for its support of terrorism, though sanctions experts said the action would have limited additional impact, since the IRGC had already been sanctioned under two previous executive orders.

“I urge our allies to join us in taking strong actions to curb Iran's continued dangerous and destabilizing behavior, including thorough sanctions outside the Iran deal that target the regime's ballistic missile program, in support for terrorism, and all of its destructive activities, of which there are many,” Trump said.

While Israeli Prime Minister Benjamin Netanyahu and the Saudi government praised Trump’s decertification decision and his over-the-top tirade against the Iranian regime, the European allies and other parties to the Iran nuclear deal expressed steely determination to preserve the accord.

“JCPOA is not a domestic issue,” European Union foreign policy chief Federica Mogherini told journalists after Trump’s speech. “It is clearly not in the hands of any president anywhere in the world to terminate it. … The president of the United States has many powers, not this one.”

In a statement Friday, International Atomic Energy Agency (IAEA) chief Yukiya Amano said, “As I have reported to the board of governors, the nuclear-related commitments undertaken by Iran under the JCPOA are being implemented.”

“Iran is now provisionally implementing the Additional Protocol to its Comprehensive Safeguards Agreement with the IAEA, a powerful verification tool which gives our inspectors broader access to information and locations in Iran. So far, the IAEA has had access to all locations it needed to visit,” Amano said. “At present, Iran is subject to the world’s most robust nuclear verification regime.”

Notably, US Secretary of State Rex Tillerson, briefing journalists at the White House Oct. 12, acknowledged that even if Congress amends legislation to unilaterally threaten sanctions if Iran grows its enrichment program when the JCPOA permits, the United States is unlikely to be able to persuade the five other world powers and Iran to renegotiate the JCPOA.

Reopening the JCPOA to address concerns on sunsets and Iran’s ballistic missile program is “frankly … unlikely,” Tillerson said. Fixing some of the concerns through a second negotiation may be an alternative, he suggested.

“We may be unsuccessful, we may not be able to fix it, and if we're not, [we] might be out of the deal,” Tillerson said. “I think what [Trump’s] saying is look, we'll try … to fix it. … I think you're going to hear he's not particularly optimistic, but said he is willing to give it a try.”