Can Congress avoid blowing up the Iran deal?

If President Donald Trump doesn’t certify Iranian compliance with the 2015 agreement later this month, the US Senate only needs a bare majority to reinstate deal-breaking sanctions. 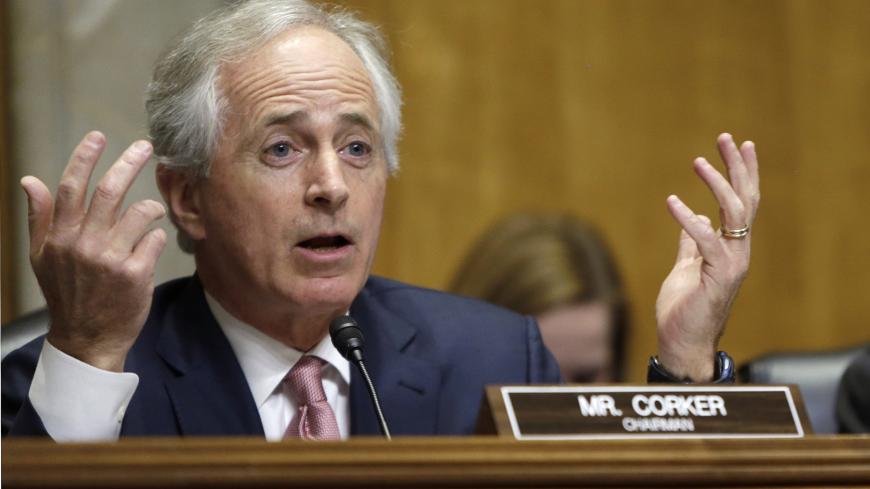 US President Donald Trump has repeatedly indicated that he won’t find Iran to be in compliance with the 2015 nuclear deal later this month. If he follows through, the agreement’s fate will lie with a Republican-controlled Congress for whom the easiest solution — both politically and legislatively — will be to reimpose nuclear-related sanctions that could well blow up the deal.

Under the 2015 law that paved the way for the Joint Comprehensive Plan of Action (JCPOA), Congress will have 60 days to take action if Trump won’t certify Iranian compliance with the deal by the Oct. 15 deadline. While most legislation takes 60 votes to pass in the Senate, the Iran Nuclear Agreement Review Act (INARA) specifically allows the upper chamber to reinstate several hard-hitting sanctions packages with a partisan majority of just 51 senators (Vice President Mike Pence would split a 50-50 tie).

“It’s 50 votes, so they can’t rely … upon a minority to block it procedurally,” said Sen. Jack Reed, D-R.I., a supporter of the deal. “I think that would be a difficult vote.”

Republicans currently hold 52 Senate seats and a comfortable majority in the House, more than enough to reinstate sanctions without any Democrats joining them if they band together. Not a single Republican in either chamber voted for the deal in 2015, and congressional leaders are desperate for a political win after back-to-back defeats on health care.

“If you look at the Republican majorities in the House and Senate, none of those members of the Republican caucus voted for the deal during the 2015 congressional review,” a Senate aide told Al-Monitor on the condition of anonymity. “So the pressure would be overwhelming on those members.”

Already, proponents of the deal are bracing for the worst.

“This could very easily take on a momentum of its own,” said Jon Finer, the chief of staff to former Secretary of State John Kerry. “You could be in a situation where the administration [won't certify compliance] and Congress will say, ‘Well the administration has spoken as to Iran’s implementation of the deal,’ and this moves forward whether or not people have fully thought through the consequences.”

Kerry himself urged Congress not to rush into action in a Washington Post op-ed on Sept. 29.

“Having cast dozens of arms-control votes as a senator — judging not whether they were perfect, but whether we were better off with them — I want to take those who may soon cast a similar vote ‘into the negotiating room’ to explain the product we negotiated to close Iran’s pathways to a nuclear weapon, and why it is so important to keep the agreement in place,” Kerry wrote.

Some Democrats are echoing that sentiment on Capitol Hill.

"I think this will be a big fight, but at the end, I don’t know if Republicans want to be responsible for Iran obtaining a nuclear weapon,” Sen. Chris Murphy, D-Conn., told Al-Monitor. “I know there are some Republicans who are so rabidly against the agreement they might vote to impose sanctions, but I have to believe there are enough reasonable Republicans that they wouldn’t put both North Korea and Iran on a pathway to nuclear weapons.”

At the other end of the political spectrum, some argue that Congress can’t be trusted to kill the deal cleanly.

“Perhaps the most inane argument is that Congress should decide the deal’s fate and whether to reimpose US sanctions,” former US Ambassador to the UN John Bolton wrote in a Wall Street Journal op-ed Sept. 28. “If a president is unwilling to solve this kind of problem, he shouldn’t have applied for the job.”

Congressional Republicans for their part have been in no hurry to get pinned down on a potentially momentous vote.

“I just don’t want to move into public discussions yet about what may occur,” Senate Foreign Relations Committee Chairman Bob Corker, R-Tenn., told Al-Monitor. Corker wrote the INARA bill and has been in contact with the Trump administration regarding certification.

The House and Senate leaders who would be tasked with putting potential legislation on the floor are being equally coy.

"This could very easily take on a momentum of its own … and this moves forward whether or not people have fully thought through the consequences.”

“You’ve done a really good job of twisting yourself around the hypothetical axle,” a spokesman for Senate Majority Leader Mitch McConnell, R-Ky., told Al-Monitor when asked if his boss planned to bring nuclear sanctions to a vote.

At its core, the Iran deal rescinded US and international sanctions in exchange for Iran curtailing its nuclear program. If Trump doesn’t certify Iranian compliance, Corker’s INARA law would allow Congress to easily reimpose all or some of four main nuclear-related sanctions packages that Tehran may well view as reason enough to leave the deal.

“All four of those are quite potent, quite potent,” said Kenneth Katzman, an Iran sanctions expert with the Congressional Research Service. “Iran would certainly charge that the US has breached the agreement even if any one of them were reimposed.”

Sanctions from the 2012 National Defense Authorization Act would have the most sweeping effect on curbing Iran’s oil exports, which have been key to ensuring that Iran remains in compliance with the deal, according to Katzman.

“The key one I would say is the National Defense Authorization Act of fiscal year 2012, which would require countries to cut their oil purchases from Iran every six months or risk having their banks basically be shut out of the American financial system,” said Katzman. “That was very, very damaging to Iran.”

Katzman also pointed to the Iran Sanctions Act, which has been waived under the deal, as “very effective as far as curbing … investment in Iran’s energy sector.”

“This was basically oil money Iran received and was in banks all over the world,” said Katzman. “Those banks could be liable to sanction if they allowed Iran to withdraw that money to a central bank to expatriate the money.”

And while Katzman identified the Iran Freedom and Counterproliferation Act as the least damaging of the sanctions Congress could reimpose, he still characterized it as “very sweeping.”

Tellingly, even some of the deal’s most vocal critics have started to warn against rash congressional action. In a joint Wall Street Journal op-ed Sept. 25, Mark Dubowitz of the Foundation for Defense of Democracies and David Albright of the Institute for Science and International Security proposed that Trump refuse to certify compliance with the nuclear deal — but as a means to make it stronger by adding new conditions and slapping Iran with new non-nuclear sanctions, not kill it.

“Congress should do its part to help fix the deal,” they wrote. “Reinstating the JCPOA sanctions after decertification would ruin the ‘decertify, waive, slap and fix’ approach. To persuade Republicans, who are the most likely to vote to reinstate JCPOA sanctions that have been waived or lifted, the administration needs to demonstrate a comprehensive strategy to fix the deal and use all instruments of American power to neutralize and roll back Iranian aggression.”

But lawmakers say they’ve seen nothing from the Trump administration to inspire confidence that the White House has any strategy beyond passing the buck to Congress.

“I am not aware of any conversations that have taken place between the administration and the Democratic leadership … or between the leadership of our committee,” said Sen. Ben Cardin, D-Md., the top Democrat on the Senate Foreign Relations Committee. “I have not been involved in any discussions.”

Cardin led a group of Senate Democrats in penning a letter to Trump administration national security officials Sept. 20 noting that INARA requires the president to notify Congress of Iranian noncompliance within 10 days.

“To date, the Senate has received no such notification, and the administration has provided little public testimony to Congress on the status of Iranian compliance with the agreement,” the senators wrote.

House Republicans have also been reticent to discuss INARA contingencies.

When asked if House Speaker Paul Ryan, R-Wis., intends to put Iran sanctions on the floor if Trump does not certify Iranian compliance, spokeswoman AshLee Strong said that the House Foreign Affairs Committee is taking the lead on the issue. Committee staffers, however, said they don’t know how they’re going to proceed as they don’t know what case Trump intends to make.

Rep. Eliot Engel, D-N.Y., the top Democrat on the House Foreign Affairs Committee, told Al-Monitor that he was still “formulating” his decision on using INARA to re-impose sanctions on Iran. Engel was one of 25 House Democrats to vote against the deal in 2015.

“Iran should not be able to get away scot-free, but whether … not certifying is the way to go, we’ve gotta see,” Engel told Al-Monitor. “And I haven’t really decided one way or another.”

Senate staffers, meanwhile, have put in semi-weekly requests to the administration to hold JCPOA briefings for members of Congress and their staff for the past several months. The Washington Post reported that they are unlikely to receive such a briefing before Trump makes his decision.

Ironically, Cardin was one of four Senate Democrats who voted against the deal in 2015. Today, he says the United States should stay in as long as Iran isn’t overtly violating its nuclear-related commitments.

“I think I speak for a lot of us who oppose the agreement,” Cardin told Al-Monitor. “We thought it was the wrong decision, [but] once it was entered into, once it was implemented, we want to see it enforced. We don’t want to see the United States violate it.”

The situation is further complicated by the fact that INARA was written with the expectation that the president would only decline to certify Iranian compliance if Tehran was clearly cheating on its end of the deal.

The International Atomic Energy Agency and several top Trump administration officials, including Secretary of State Rex Tillerson and Joint Chiefs Chairman Joseph Dunford, have said Tehran is in “technical compliance” with the deal. But hard-liners such as Ambassador to the UN Nikki Haley want a debate over whether the deal is in America’s national security interest, which would provide another rationale for kicking it back to Congress under the 2015 Corker law.

“INARA,” the Senate aide said, “wasn’t written for this scenario.”