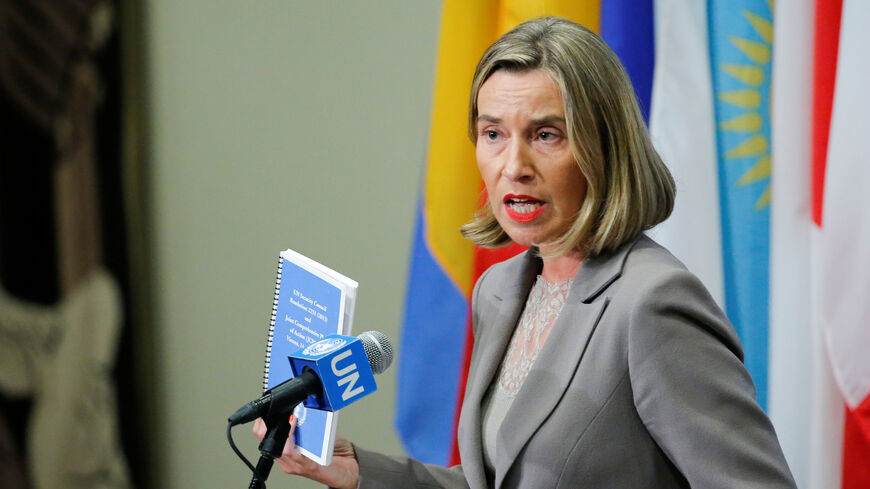 The European Union’s top diplomat got a frosty reception on Capitol Hill today as she lobbied lawmakers to preserve the nuclear deal with Iran.

Speaking at a press conference this afternoon, EU High Representative Federica Mogherini expressed confidence that US lawmakers would not kill the hard-fought agreement. US President Donald Trump last month refused to certify that the deal meets congressional requirements and tasked Congress with unilaterally strengthening the deal through the threat of sanctions.

“We are exchanging views with the legislators on the need to make sure [that] before a bill is presented, that its contents do not represent a violation of the agreement,” Mogherini told reporters. “I got clear indications that the intention is to keep the United States in compliance with the agreement.”

One aide told Al-Monitor that Republican leaders made clear what they see as deficiencies in the nuclear deal. And they went a step further, stressing that financial and economic relations with Iran are also in jeopardy.

While Iran is still subject to myriad other sanctions under US law, the 2015 nuclear accord lifted wide-ranging nuclear sanctions, paving the way for US companies to invest in certain sectors of the Iranian economy. The EU also maintains sanctions on Iran for non-nuclear-related activity even as it has bolstered its trade ties since the deal.

In the House, Mogherini met with Speaker Paul Ryan, R-Wis., and Foreign Affairs Committee Chairman Ed Royce, R-Calif. In the Senate, she met with Senate Foreign Relations Committee Chairman Bob Corker, R-Tenn., and Sen. Tom Cotton, R-Ark., who are working together on legislation to reimpose sanctions on Iran should it come within one year of developing a nuclear weapon.

Mogherini found a more receptive audience in her meetings with House Democrats, even among those who initially opposed the deal. She met with House Minority Leader Nancy Pelosi, D-Calif., as well as the two top Democrats on the foreign affairs committees of both chambers: Rep. Eliot Engel, D-N.Y., and Sen. Ben Cardin, D-Md. Both voted against the deal in 2015 but have since warned the Trump administration and their Republican counterparts against unravelling the accord.

“We all have to work together to make sure that Iran is currently accountable in terms of its ballistic missiles, in terms of terrorism,” Engel told Al-Monitor, noting that he also discussed non-nuclear-related sanctions on Iran with Mogherini. “We’re going to need our European allies to be partners with us to make sure that happens. And now’s not the time to alienate them. Now’s the time to work with them.”

Similarly, Cardin aide Sean Bartlett said the senator "will not support any legislation that would damage the transatlantic alliance."

Mogherini would have more leverage if the Europeans were willing to put certain long-standing congressional priorities on the table, one Democratic aide suggested.

These include following the example of Congress and cracking down on Iran’s non-nuclear activities. Trump in August signed the first new sanctions on Iran since the nuclear agreement was signed in 2015, and the House passed even more sanctions on Iran’s ballistic missile program last month by a 423-2 vote.

“She could strengthen her argument about the US continuing to remain a party to the [nuclear accord] if the EU were to show that they are willing to confront Iran’s malign activities outside the scope of the agreement,” a Democratic aide told Al-Monitor.

In particular, the aide suggested designating all of Hezbollah as a terrorist entity. The European Union has designated the Shiite militia’s paramilitary wing as a terrorist organization, but unlike the United States, it treats Hezbollah members of parliament and Cabinet officials in Lebanon differently. The distinction has been a source of long-standing congressional ire and the House passed a resolution last month urging the EU to follow US policy.

The aide also recommended “cracking down” on Mahan Air, a private Iranian firm. The US accuses the airline of shipping arms and transporting members of the Islamic Revolutionary Guard Corps to support Hezbollah and the Syrian regime and sanctions the airline under counterterrorism authorities. However, Mahan Air operates flights throughout Europe.

On the other hand, the aide also suggested that Mogherini could “state more clearly to detractors of the agreement that Europe has every intention of remaining in the agreement, whether the US leaves or stays, thereby demonstrating that US snapback sanctions could lose their potency.”

In a Washington Post op-ed published today, Mogherini did just that, writing, “Europe has made clear where it stands: We will preserve the deal, because it is delivering on its promises, and it is in our security interest to guarantee that that continues.”