A flurry of Republican bills are getting no love from Democrats. 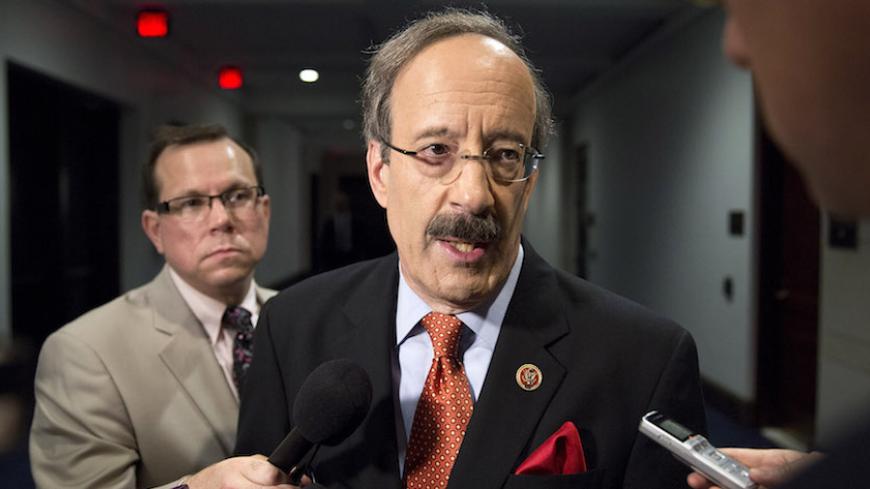 US Reps. Eliot Engel. D-N.Y.. speaks to the media before attending a closed meeting for members of Congress on the situation in Syria at the US Capitol in Washington, Sept. 1, 2013. - REUTERS/Joshua Roberts

Congressional Republicans appear to be hurtling toward a showdown over Iran's access to the US dollar with little or no support from Democrats, potentially dooming their legislative efforts to block further concessions to Tehran.

House Foreign Affairs Committee Chairman Ed Royce, R-Calif., on April 19 unilaterally introduced legislation that would prohibit the Obama administration from allowing the US dollar to be used to facilitate trade transactions. Royce has so far failed to secure the endorsement of his Democratic colleague, Rep. Eliot Engel, D-N.Y., even as the Republican leadership's blessing suggests a House vote could come soon.

"We cannot grant Iran access to the US dollar in any form," House Majority Leader Kevin McCarthy, R-Calif., said in an April 19 press release endorsing the Royce bill. "Iran supports terrorism around the globe, continues to test ballistic missiles, and commits egregious human rights abuses against the Iranian people. Iran shouldn’t get relief simply because they agreed in word to a flawed nuclear deal. House Republicans are concerned with Iran’s destabilizing behavior and any potential access to the US dollar. I commend Chairman Royce for introducing this important legislation.”

"Our concern is that there are at least four workarounds to provide Iran with access to the dollar, including dollar-denominated transactions, dollar-clearing, dollar-based conversions, and dollar-related foreign currency transactions," Ryan spokesman Michael Shapiro wrote. "Here’s the bottom line: The administration should definitively rule out any potential workaround that provides Iran — directly or indirectly — with access to the dollar or the US financial system."

The Royce bill has been to the House Financial Services Committee. A panel spokesman said no vote had yet been scheduled.

Similar efforts have been introduced in recent days by Reps. David Trott, R-Mich., and Peter Roskam, R-Ill. Neither has any Democratic co-sponsors to date.

The flurry of activity comes amid concerns that the Obama administration is weighing ways to address Tehran's complaints that the United States is not living up to its end of the nuclear deal because Iran remains largely cut off from the dollar-dominated international financial system. Sen. Tom Cotton, R-Ark., on April 20 held up the president's pick to lead the terrorism and financial crimes division at the Treasury Department, Adam Szubin, over the issue.

A number of Democrats — including Minority Whip Steny Hoyer, D-Md. — have also raised concerns, but many are wary of signing on to any bills that could be seen as seeking to undermine the president's signature international achievement.

Republicans "are going to be much more anxious to shoot down everything the administration does," Engel told Al-Monitor. "I'm less anxious to do that. But I am anxious to hold Iran's feet to the fire, as we were promised we would be allowed to do if the JCPOA [Joint Comprehensive Plan of Action] passed."

Engel said he had a "general discussion" with Royce about the bill but "just wasn't prepared to make a decision yet."

He and Royce have worked together on past Iran sanctions bills, including legislation that passed the House 400-20 in July 2013. Engel, however, did not support a more partisan Iran sanctions bill earlier this year that gathered almost no Democratic support in the House and went nowhere in the Senate.

Lack of Democratic support could feed a vicious cycle for Republican efforts. In the wake of last year's bruising congressional fight over the JCPOA, for example, the powerful pro-Israel lobby American Israel Public Affairs Committee, while it opposes giving Iran access to the dollar, may be reluctant to lobby for specific legislation unless there's some level of bipartisan support for it.

A similar story is playing out in the Senate, where Senate Foreign Relations Committee member Marco Rubio, R-Fla., introduced Iran dollar legislation April 6. The bill has five Republican co-sponsors, but no Democrats.

Panel Chairman Bob Corker, R-Tenn., told Al-Monitor April 20 that he is still trying to get Democrats on board on broad legislation that would target Iran's access to dollars and other issues. The top Democrat on the panel, Sen. Ben Cardin, D-Md., however, told Al-Monitor earlier this month that he had concerns with flat out banning dollar conversions.

"Given the relative success of the nuclear deal implementation compared to what the naysayers predicted, I think there's a lot of deference on the Democratic side of the aisle to the administration's handling of issues surrounding implementation," committee member Chris Murphy, D-Conn., told Al-Monitor.