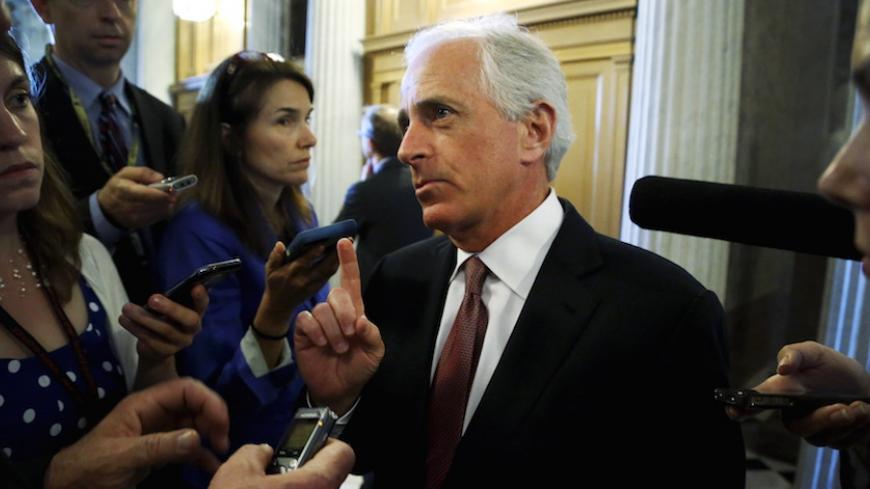 US Sen. Bob Corker, R-Tenn., talks with reporters after the weekly Republican caucus policy luncheon at the US Capitol in Washington, May 12, 2015. - REUTERS/Jonathan Ernst

US lawmakers are split over Iran's apparent inability to get the sanctions relief it feels entitled to under the nuclear deal.

Tough! argues Senate Foreign Relations Committee Chairman Bob Corker, R-Tenn. Helping Iran access the out-of-reach US dollars it needs for most big-ticket transactions is a nonstarter, Corker says, especially when it is launching ballistic missiles tagged with "Israel must be wiped out."

"You don't get more than you negotiated for," Corker told reporters after an April 5 hearing with the State Department's No. 4 official. "Those banking restrictions were put in place because of money laundering and illicit financing that's taking place … and to try to accommodate dollar transactions inappropriately — I think you heard today from most people on both sides of the dais, that is not something we want to see happen."

Corker told Undersecretary of State for Political Affairs Thomas Shannon that he would try to "codify legislatively" restrictions on access to the dollar, but his Democratic counterpart isn't so sure. Ranking member Ben Cardin, D-Md., told Al-Monitor that he is worried punishing Iran beyond a limited set of prohibited activities could legitimately be seen as violating the Joint Comprehensive Plan of Action (JCPOA).

"There may be a way we can deal with the dollar transfers, but I think we would probably have to tie it to ballistic missiles, human rights, terrorism, rather than broadly saying they can't convert," Cardin said. "Because if it's a matter where they're entitled to relief under the JCPOA, and if effectively you only do that through conversion, then legislating they can't do conversions could be a violation of the JCPOA."

Sen. Robert Menendez, D-N.J., told Al-Monitor that there is bipartisan appeal for limiting Iran's access to dollars "outside of the nuclear portfolio."

There are a "series of things" Congress could do "to restrict not just the use of dollars but transactions that ultimately flow and get approved through the US financial system," Menendez said. "That's a lot of what we did in the original Iran Sanctions Act and follow-ons. And so how one looks at that within the context of non-nuclear issues to restrict Iran from being able to use dollars and/or avenues that ultimately lead to dollar transactions and/or transactions through US institutions is what's being developed."

Other committee members don't make such a distinction.

Sen. Marco Rubio, R-Fla., said he would hold up Treasury nominees until he received an answer to the March 30 letter he and Sen. Mark Kirk, R-Ill., sent to Treasury Secretary Jacob Lew. That letter notably demands assurances that the administration "will not work on behalf of Iran to enable Iranian access to US dollars elsewhere in the international financial system, including assisting‎ Iran in gaining access to dollar payment systems outside the US financial system."

"I will continue to demand answers on these attempts to give Iran concession after concession even as the regime’s behavior makes clear that it has no intention of halting its threats to Israel and its regional efforts to sow instability,” Rubio said in a statement after the hearing.

The issue has emerged over the past few days following reports that the Obama administration is looking at ways to ease restrictions on Iran's access to dollars. Iranian officials have accused the United States of failing to live up to its commitments, causing headaches for President Hassan Rouhani, a relative moderate.

"The Americans have said that they would lift sanctions, and they have actually done so on paper," Supreme Leader Ayatollah Ali Khamenei said in his March 20 Nowruz speech. "But through other ways and methods, they are acting in a way that the result of sanctions repeal will not be witnessed at all.”

The reports have troubled Republicans and Democrats alike. The administration has pushed back against some of the reporting, without outright denying that it is considering giving Iran access to offshore dollar clearing facilities.

"The rumors and news that have appeared in the press that the US is preparing to reinstate a U-turn authorization or to allow Iran access to the US financial system are not true," Shannon testified April 5. "There have been instances where we have had to help Iran access that money by clarifying the regulations under which money can be transferred to them."

Corker said he was concerned that different branches of the administration were working at cross-purposes. He felt relieved following an April 4 conversation with the Treasury Department's undersecretary for Terrorism and Financial Intelligence, Adam Szubin, but was flummoxed by Secretary of State John Kerry's comments on television the very next morning.

"It is fair for Iran to get what it deserves because it kept its part of the bargain to date with respect to the nuclear agreement,” Kerry said on MSNBC's Morning Joe show. "We said we would lift the sanction — we’re under an obligation to lift the sanction.”

Corker told reporters after the hearing that he would try to include restrictions on Iranian access to the dollar in a package of Iran-related sanctions he has been negotiating with Cardin and other committee members.

"The purpose is to keep the administration from fudging in order to accommodate Iran beyond the four corners of the agreement itself," Corker said.

One other topic of contention is how much to limit this and future administrations' ability to waive sanctions so that "no president can use a waiver to enter into an international agreement."