The House and Senate have wrapped up sanctions legislation just in time for AIPAC confab. 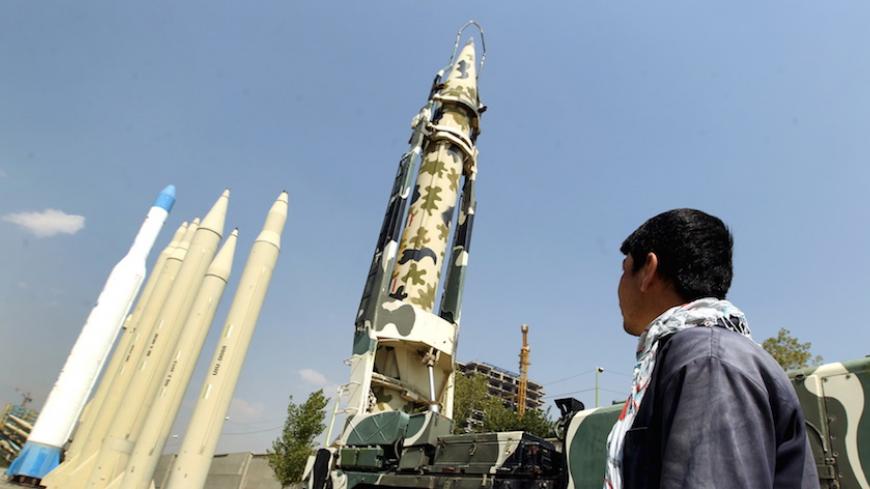 A man looks at Iranian-made missiles at the Holy Defense Museum in Tehran, Sept. 23, 2015. - REUTERS/Raheb Homavand

Both chambers of Congress are introducing bipartisan Iran sanctions bills this week just in time for the main pro-Israel lobby's annual conference in Washington.

Legislation from House Foreign Affairs Committee Chairman Ed Royce, R-Calif., would require the Donald Trump administration to sanction Iranian and foreign individuals and entities that support Tehran's ballistic missile program, according to a copy obtained by Al-Monitor. The panel's top Democrat, Rep. Eliot Engel, D-N.Y., is co-sponsoring the bill, according to an aide.

Meanwhile, in the Senate, Foreign Relations Chairman Bob Corker, R-Tenn., and Robert Menendez, D-N.J., introduced broader legislation March 23 that would also target Iran over its human rights violations and terrorism. It would notably extend terrorism sanctions to the Islam Revolutionary Guard Corps (IRGC) and sanction anyone found to violate the international arms embargo against Iran.

A total of 14 lawmakers — seven Republicans and seven Democrats — are original co-sponsors, including ranking member Ben Cardin, D-Md. Both he and Menendez voted against the 2015 nuclear deal.

"We've been negotiating and I am satisfied with where we were able to get to," Cardin said. "The important part is that there is nothing in this bill … that could cause a violation of the [nuclear deal]. It is strong in dealing with Iran's other non-nuclear activities, such as dealing with the ballistic missile violations, their arms issues, human rights and dealing with terrorism. So the four areas that were not in the nuclear agreement we strengthened, but did it in a way that is directed toward those activities and has nothing to do with the nuclear issue."

A Cardin aide said the senator was notably able to remove language that would have made it impossible for the Trump or future administrations to use national security waivers to enter into international agreements with Iran. Also removed, the aide said, were several provisions seen as violating the letter or spirit of the nuclear deal, including limitations on off-shore dollar clearing and U-turn transactions and reports on Iran's use of commercial aircraft for terrorist activities and on the value and uses of sanctions relief granted under the nuclear deal.

The aide said the changes helped bring more Democrats on board, including Sen. Joe Donnelly, D-Ind. Other members are still on the fence.

"I think there's some rough edges that still need to be smoothed out," said Sen. Chris Murphy, D-Conn., the top Democrat on the committee's Middle East panel. "It's got to be proportional to the threat."

The House bill would not only target the missile program but would also go after individuals and entities that provide "significant financial services" to the program's supporters. Another provision would punish anyone found to facilitate the transfer of conventional arms to or from Iran. Congress is particularly upset at Tehran's support for Lebanon's Hezbollah, the Houthi rebels in Yemen, Bashar al-Assad's regime in Syria and assorted Shiite militias in Iraq.

The new authorities in the House bill would be included as an amendment to the existing Iran Sanctions Act. Congress overwhelmingly voted last year to renew the legislation for 10 years, defying the Barack Obama administration's warnings that doing so would antagonize the Iranians even as they appear to be complying with the nuclear deal.

Royce's bill would enshrine into US law a United Nations Security Council resolution negotiated as part of the nuclear deal that "calls upon" Iran not to undertake activity on ballistic missiles that could carry a nuclear warhead. That resolution, UNSC 2231, only permits conventional arms transfers to and from Iran if allowed by the Security Council on a case-by-case basis. Iran, for its part, asserts that the Security Council language does not outright ban either activity.

In addition, the House bill would require President Trump to report to Congress in case of any future Iran ballistic missile tests, and whether those responsible have been sanctioned. It also requires the administration to provide an analysis of the foreign and domestic supply chain that supports Iran’s ballistic missile program and help Congress determine the vulnerabilities and challenges in curbing support for the program.

The Trump White House has signaled its intention to firmly deal with any perceived Iranian violations of the nuclear deal and UN Security Council resolutions. The Treasury Department sanctioned 25 individuals and entities in February following an Iranian missile test, fulfilling a promise to put Tehran "on notice" that any moves that the United States sees as aggressive won't be tolerated.

A summary of the bill first obtained by Al-Monitor quotes former President Barack Obama's own words in asserting that the bill does not violate the 2015 nuclear deal with Iran.

"With very limited exceptions, Iran will continue to be denied access to our market — the world’s largest — and we will maintain powerful sanctions targeting Iran’s support for groups such as Hizballah, its destabilizing role in Yemen, its backing of the Assad regime, its missile program and its human rights abuses at home," Obama wrote to Rep. Jerry Nadler, D-N.Y., in an August 2015 letter. "Critically, I made sure that the United States reserved its right to maintain and enforce existing sanctions and even to deploy new sanctions to address those continuing concerns, which we fully intend to do when circumstances warrants."

The bills were wrapped up just days before the start of the annual gathering of the pro-Israel American Israel Public Affairs Committee, often referred to as AIPAC, here in Washington. Hundreds of activists will descend on Capitol Hill on March 28 to lobby their representatives, greatly boosting the bill's odds of passage.