A look at the Middle East issues Congress will be addressing the week of June 16. 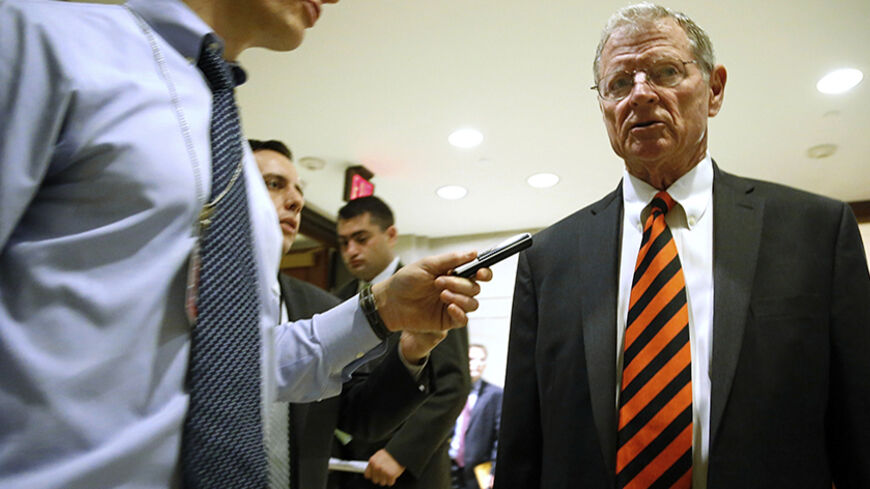 Senator James Inhofe R-Okla. (R) is trailed by reporters outside of a closed-door Senate Armed Services Committee briefing on the Bergdahl prisoner swap at the US Capitol in Washington, June 10, 2014. - REUTERS/Jonathan Ernst

The crisis in Iraq will dominate Congress’ work behind the scenes next week as lawmakers join the Obama administration in reviewing options for a beefed up US role in a country that risks spiraling out of control.

President Barak Obama vowed June 13 to “consult closely with Congress as we make determinations about appropriate action” in the coming days. Lawmakers have ruled out boots on the ground, but many are open to air strikes, increased US military weapons sales and other forms of aid.

“We will not be sending US troops back into combat in Iraq,” Obama said in a South Lawn address. “But I have asked my national security team to prepare a range of other options that could help support Iraq security forces and I’ll be reviewing those options in the days ahead.”

Sen. Bob Corker, R-Tenn., the top Republican on the Senate Foreign Relations panel, urged the president to quickly seek congressional authorization for a strong response to the rapid gains by al Qaeda-linked militants.

“Assuming the government of Iraq is willing to take immediate, concrete steps to rectify the political problems within their country, the administration, working with Congress, should then try to stop the bleeding in Iraq by providing the appropriate air assistance,” Corker said in a statement on June 13. “In addition, we should assign senior, credible diplomats to help improve the situation and use U.S. military expertise to strengthen the Iraqi’s security forces and prevent any further advances by terrorists. The president must make this one of his top priorities and work with Congress to authorize support as needed.”

The rapid gains by the Islamic State of Iraq al-Sham (ISIS) have induced predictable partisan squabbling on Capitol Hill, with Democrats blaming the Bush administration for the 2003 invasion and Republicans saying Obama took his eyes off the ball. Both parties however share the president’s reluctance to be “dragged back” into Iraq without a plan for long-term stability by the Iraqis themselves.

Some Republicans called for immediate action after the president’s speech.

“The President and his team need to be acting urgently — not ‘reviewing options in the days ahead,’” House Foreign Affairs Committee Chairman Ed Royce, R-Calif., said in a statement. “We shouldn’t have boots on the ground, but we need to be hitting these columns of terrorists marching on Baghdad with drones now.”

Sen. James Inhofe, R-Okla., the top Republican on the Senate Armed Services Committee, called on the president to rush “the assistance the Iraqis need to effectively combat the growing terrorist threat, including logistics, training, intelligence, and foreign military sales.”

“The President needs to put forward a comprehensive strategy for Iraq and the Middle East, one that tells our military men and women that their blood, sweat, and tears over the past decade weren’t in vain,” Inhofe said in a statement.

Democrats meanwhile made clear they don’t want to see the president drag the country back into a war he campaigned on ending.

“I was pleased by the President’s assurances that he will not send US troops back into combat in Iraq,” said Minority Leader Nancy Pelosi, D-Calif. “Congress looks forward to receiving additional intelligence and information regarding the military, humanitarian and other support options being considered by the Administration.”

The markup is all but certain to reignite debate on US foreign aid, particularly when it comes to Egypt and the Palestinian Authority (PA).

The House and Senate chairmen are at odds over support for Egyptian President Abdel Fattah al-Sisi. Rep. Kay Granger, R-Texas, has expressed support while Sen. Patrick Leahy, D-Vt., is blocking deliveries of military aid to Egypt and says it needs to fight Islamist militants in the Sinai.

Support for Palestinian aid took a bipartisan blow following the formation of a unity agreement with Hamas. Some 88 senators have signed on to a letter by Sens. Ben Cardin., D-Md. and Susan Collins, R-Maine, urging Obama to withhold aid until “we have confidence” the new government supports Israel’s right to exist; in the House, 16 conservative Republicans have co-sponsored a resolution from Rep. Trent Franks, R-Ariz., calling on the administration to terminate aid and redesignate the Palestinian Liberation Organization (PLO) a terrorist organization.

On Iran, the House Foreign Affairs panel on the Middle East and North Africa marks up a non-binding resolution on June 19 condemning the “state-sponsored persecution of its Baha'i minority” and “continued violation of the International Covenants on Human Rights” and another “calling on the government of Iran to fulfill their promises of assistance in this case of Robert Levinson,” a former FBI agent who was kidnapped in 2007 – probably by Iranian intelligence officials – in 2007. The MENA panel will hold a joint hearing with the human rights panel on “Iran’s abysmal human rights record” under President Hassan Rouhani, part of a series of hearings ahead of the July 20th deadline under the interim nuclear agreement. And the House Armed Services Committee holds a hearing June 19 on the nuclear negotiations’ implications for US defense.

Al-Monitor has learned that Sens. Mark Kirk, R-Ill. and Marco Rubio, R-Fla., are working on Iran human-rights legislation that could be released as early as next week. Royce and his Democratic counterpart atop the House Foreign Affairs Committee, Rep. Eliot Engel, D-N.Y., are circulating a letter to Obama warning him that Congress will have to sign off on any deal with Iran.

“Almost all sanctions related to Iran’s nuclear program are also related to Tehran’s advancing ballistic missile program, intensifying support for international terrorism, and other unconventional weapons programs,” they write in the letter, which was first reported by the Jerusalem Post. “Similarly, many of these sanctions are aimed at preventing Iranian banks involved in proliferation, terrorism, money laundering and other activities from utilizing the United States and global financial systems to advance these destructive policies. Iran's permanent and verifiable termination of all of these activities — not just some — is a prerequisite for permanently lifting most congressionally-mandated sanctions. This often unnoted reality necessitates extensive engagement with Congress before offers of relief are made to Iran, and requires Congressional action if sanctions are to be permanently lifted.”

In other action, the House panel holds a hearing June 18 on protecting the Christian heritage in Turkey, followed by a vote on legislation requiring the secretary of State to provide Congress an annual report on US efforts to “survey and secure the return, protection, and restoration of stolen, confiscated, or otherwise unreturned Christian properties in the Republic of Turkey and in those areas currently occupied by the Turkish military in northern Cyprus.” The Turkish Government is reportedly seeking to block the measure, according to Armenian news sources.

Finally, the Senate Foreign Relations panel holds a nomination hearing June 17 on President Obama’s pick to serve as ambassador to Algeria. Joan Polaschik is a career diplomat serving as director of the Office of Egypt and Levant Affairs at the State Department.