Forget about voting on anything before March 24 deadline, House and Senate Democrats warn. 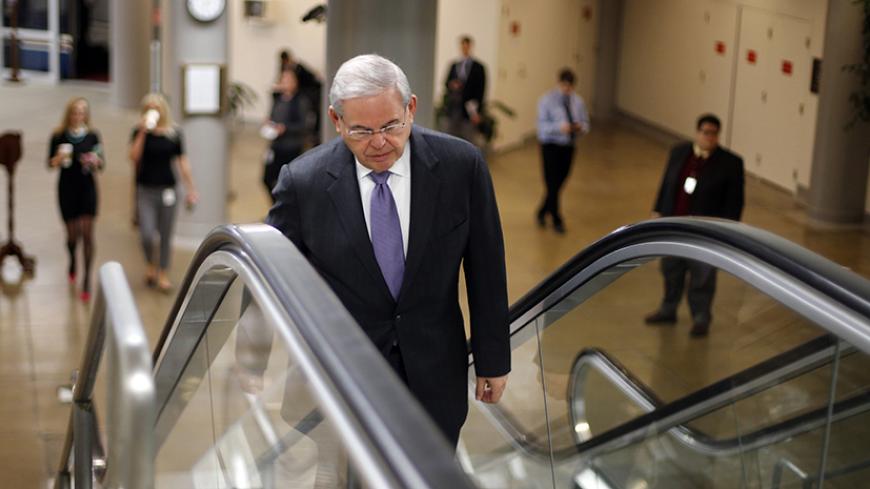 Sen. Robert Menendez, D-N.J., arrives for a vote at the Capitol in Washington, March 4, 2015. - REUTERS/Jonathan Ernst

WASHINGTON — Congressional action on Iran ground to a halt March 4 after Democrats revolted against Republican plans to take up legislation as early as next week.

After a false start following Prime Minister Benjamin Netanyahu's address, the move left the Senate no closer to passing legislation. Meanwhile, House members made it equally clear that they see no path to passing new restrictions before the March 24 deadline for a framework agreement.

"There is no immediate or urgent need to circumvent the committee process and we are disappointed that you’ve pursued this partisan course of action," Senate Democrats, who co-sponsored legislation mandating a congressional review, wrote in a letter to Senate Majority Leader Mitch McConnell, R-Ky. "We will only vote for this bill after it has gone through the regular mark-up process in the Senate Foreign Relations Committee and after the March 24 deadline for the political framework agreement."

The letter was spearheaded by the top Democrat on the Foreign Relations Committee, Sen. Robert Menendez, D-N.J., and signed by eight other Democrats and one independent. The lawmakers are worried in part that Republicans could try to attach prospective sanctions on Iran to the congressional review bill.

Senate Foreign Relations Chairman Bob Corker, R-Tenn., had hoped to hold a committee vote on the bill next Tuesday, but Menendez objected in the name of committee Democrats after McConnell's announcement. Committee rules prohibit moving legislation in the absence of a quorum, which requires at least one member from each party to be present.

Separately, the House Foreign Affairs Committee is no closer to passing new legislation after its top Democrat, Rep. Eliot Engel, D-N.Y., balked at taking any potentially disruptive action while talks continue this month. Several congressional aides told Al-Monitor that committee Chairman Ed Royce, R-Calif., has tried to get Engel to join him on new sanctions legislation, to no avail.

"I don't think it's unreasonable to wait and see ... what's in an agreement before we decide what we're going to do or not do," Engel told Al-Monitor. "I think that's a reasonable request."

Instead, he signed a letter to President Barack Obama along with Royce making clear that a final deal "must constrain Iran’s nuclear infrastructure so that Iran has no pathway to a bomb, and that agreement must be long-lasting."

Royce and House Majority Leader John Boehner, R-Ohio, are both coming under increasing pressure from hawkish Republicans to take some sort of action as the deadline for a deal gets closer. Still, the House is seen as unlikely to take any partisan action that could make it harder to pass legislation in the Senate, where six Democratic votes are needed to pass legislation.

That makes it increasingly unlikely that Congress will vote before the end of the month, especially since the House is out next week.