Lawmakers are forced to pick sides after key allies publicly come down on opposite sides of sanctions push. 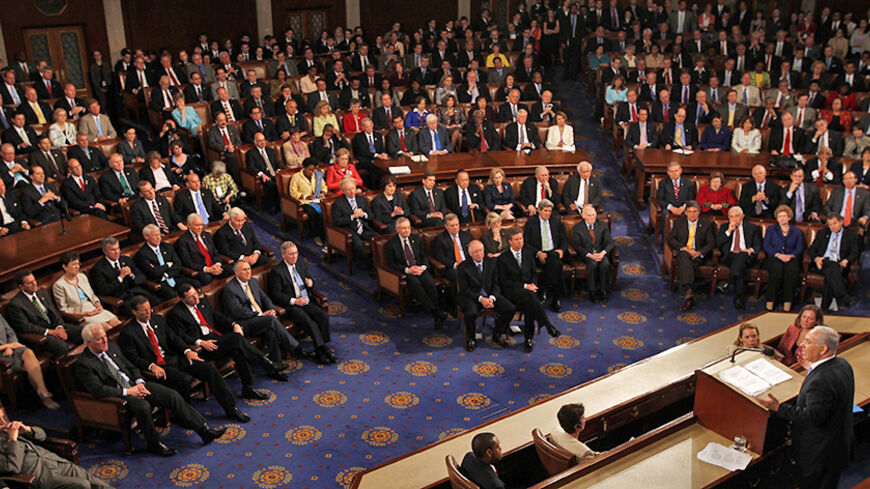 Israeli Prime Minister Benjamin Netanyahu addresses a joint meeting of Congress in the House Chamber of the US Capitol in Washington, May 24, 2011. - REUTERS/Jason Reed

US lawmakers face an uncomfortable choice between their European and Israeli allies now that both sides publicly disagree on whether to pass new Iran sanctions legislation.

Nuclear negotiating partners France, Britain and Germany for the first time jointly came out against new sanctions legislation in a Jan. 21 Washington Post op-ed. Meanwhile, the Israeli intelligence service Mossad issued a rare press statement the morning of Jan. 22 disputing a news report that it had warned US senators that sanctions legislation could "tank" diplomatic negotiations.

The statement said Mossad chief Tamir Pardo told visiting senators earlier this month that sanctions legislation could cause a "temporary breakdown in the talks, at the end of which the negotiations will be restarted under better conditions."

"Contrary to the report, the Mossad chairman did not say that he opposes additional sanctions against Iran," Mossad said, according to a translation by an Israeli blogger. "The Mossad chairman pointed out that the negotiations with Iran must be conducted using 'carrots and sticks,' and the 'sticks' are currently missing."

The Europeans on the contrary urged lawmakers to back off, lest they "jeopardize" efforts to end the face-off over Iran's nuclear program peacefully.

"Maintaining pressure on Iran through our existing sanctions is essential," wrote the EU High Representative Federica Mogherini and the foreign ministers of France, Britain and Germany. "But introducing new hurdles at this critical stage of the negotiations, including through additional nuclear-related sanctions legislation on Iran, would jeopardize our efforts at a critical juncture."

Lawmakers of all stripes acknowledged the dueling messages.

"We certainly should think about our allies' position and take them into serious account," said Sen. Marco Rubio, R-Fla., a driving force behind bipartisan sanctions legislation. "But ultimately it's important for us to lead the international order, as those allies expect us to do. And second, it's important for us to act in our own national interests, as those nations act in theirs."

Others were quick to make clear they'll stand with Israel. Congress has long taken issue with European nations over Israel policy, notably for recognizing Palestine as a state, endorsing Palestine's bid to join the International Criminal Court and dragging its feet in listing Hezbollah as a terrorist organization.

"I think the Europeans are not living in reality when they think that if we have hug diplomacy that's going to work with the Iranians," said House Foreign Affairs Committee member Ted Poe, R-Texas. "It's not a hard [choice] for me. We need more sanctions, not fewer sanctions."

Sen. Lindsey Graham, R-S.C., a longtime Iran hawk, said he wasn't convinced by the Israeli arguments. He's increasingly in favor of passing legislation that he co-wrote with Senate Foreign Relations Committee Chairman Bob Corker, R-Tenn., that would require Congress to sign off on a final nuclear deal as an alternative to sanctions legislation.

"I am increasingly in the camp that the best course to follow is to make sure that Congress can look at the deal — like we have 24 other times, with 24 other nations — before we come back, and if it's a good deal, we'll vote for it … and if it's a bad deal, we'll say 'no, start over,'" he said. "Congress is not going to take a pass."

Complicating matters, the issue has taken on distinctly partisan overtones despite a longstanding tradition of Democrats and Republicans working in tandem when it comes to Iran and Israel. House Speaker John Boehner, R-Ohio, infuriated Democrats Jan. 21 when he invited Israeli Prime Minister Benjamin Netanyahu to address Congress on the issue of Iran without giving the president a head's up.

House Minority Leader Nancy Pelosi, D-Calif., said Jan. 22 it was not "appropriate" for the Israeli leader to be speaking on Capitol Hill on March 3, two weeks before elections. Others slammed Netanyahu for embedding himself on the Republican side of a domestic political debate, arguing that he risked eroding historically bipartisan support for Israel in the long run.

"I am quite surprised that the head of a foreign government would interject himself this prominently in a partisan squabble between the speaker of the House and the president of the United States," said Rep. Gerry Connolly, D-Va. "I think that's unprecedented, and I think it's most inappropriate."

Netanyahu as recently as December told visiting lawmakers that he welcomed their "leadership" on legislation by Sens. Mark Kirk, R-Ill., and Robert Menendez, D-N.J., to impose escalating sanctions on Iran if no deal is reached by July 6. Senate Majority Leader Mitch McConnell, R-Ky., has previously vowed a vote on the bill, and the Senate Banking Committee is scheduled to vote on it next week.

Some Democrats privately suspect Republicans of trying to turn Israel into a partisan issue to cleave Jewish voters away from the Democratic Party. That may help explain pro-Israel leaders' reluctance to openly criticize Netanyahu despite what many Democrats see as his overt support for Republican Mitt Romney in the 2012 election.

"I agree with Secretary [John] Kerry, when he says that Prime Minister Netanyahu is always welcome to come to Washington," Rep. Eliot Engel, D-N.Y., the top Democrat on the House Foreign Affairs Committee told reporters Jan. 22 when asked for his reaction to the hullabaloo. "There has always been strong bipartisan support for Israel in the Congress, and that will remain so."

"It’s the opinion of the United Kingdom that further sanctions or further threat of sanctions at this point won’t actually help to bring the talks to a successful conclusion," Cameron said at a joint press conference with Obama Jan. 16. "And they could fracture the international unity that there’s been, which has been so valuable in presenting a united front to Iran."

Some lawmakers said they welcomed the clarity the US allies are bringing to the issue by going public.

"I think he brings clarity to the issue of the nuclear threat of Iran," she told Al-Monitor. "I think it's so important for him to point out how Israel is in peril, and Western interests around that region are in peril, and how sanctions are needed."

Nadler for his part said the European op-ed makes clear that Congress would get some of the blame if negotiations break down after the passage of sanctions legislation.

"Why should we appear to be to blame? Why give the Europeans — and others — an excuse not to double down on sanctions?" he said.

In the end, some lawmakers said, US relations with both Israel and the Europeans will endure despite this latest clash.

"Obviously this is one issue there's disagreement over," Poe said. "There will be other issues in the future."