Republicans say the Iran Nuclear Agreement Review Act requires the president submit any deal on Iran's nuclear program to Congress for review. This could complicate the Biden administration's efforts to revive the Iran nuclear deal. 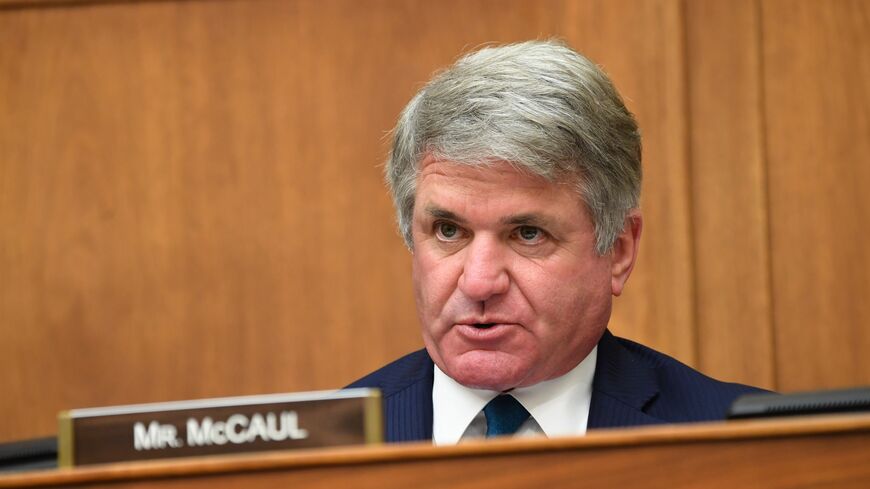 Rep. Michael McCaul, a Republican from Texas and the GOP member member on the House Foreign Affairs Committee, speaks during a hearing of the committee on Sept. 16, 2020. - KEVIN DIETSCH/POOL/AFP via Getty Images

A group of Republicans in the House of Representatives is demanding the Biden administration have Congress review and assess any new nuclear deal with Iran, citing a 2015 law.

Rep. Michael McCaul of Texas and other Republicans on the House Foreign Affairs Committee wrote US Secretary of State Antony Blinken on Monday.

“We are writing to remind you of the Administration’s statutory obligations to provide Congress with an opportunity to review and assess any nuclear agreement that you reach with Iran,” they wrote in the letter.

US officials are negotiating a possible return to the 2015 Joint Comprehensive Plan of Action (JCPOA), more commonly known as the Iran nuclear deal. The agreement, which came into effect under President Barack Obama, removed international sanctions on Iran in exchange for Tehran scaling back its nuclear program. Former US President Donald Trump withdrew from the JCPOA in 2018 and reimposed sanctions. President Joe Biden is now seeking a potential return to the deal. Indirect talks between the United States and Iran in Vienna have been ongoing since April.

The House Foreign Affairs Committee Republicans’ letter focused on the Iran Nuclear Agreement Review Act of 2015. This law requires the president to submit any nuclear-related agreement with Iran to Congress for review within five days. The law also says the president must inform Congress every 90 days that Iran is complying with the deal and provide a certification that the agreement has a framework to prevent Iran’s nuclear program from becoming a security threat, among other stipulations.

Any US return to the JCPOA would constitute a new agreement in need of congressional review because of changes to the status of Iran’s nuclear program since 2015, the Republicans wrote. To this end, they cited Blinken’s comments to Congress last week that Iran’s nuclear capabilities are “galloping forward” as well as Iran’s current uranium enrichment levels and other JCPOA violations. Iran is currently enriching uranium, which is required to develop nuclear power, at 60% purity, which is well above the 3.67% limit set by the JCPOA.

“These violations make it impossible to simply ‘return’ to the JCPOA, because Iran’s non-compliance has changed the deal itself,” wrote the lawmakers.

The Iran Nuclear Agreement Review Act could complicate Biden’s efforts to revive the JCPOA, according to former Bush administration official Stephen Rademaker. Both the Senate and the House would have the opportunity to reject a new agreement on a JCPOA return. If they vote against it, the administration would either need to defy the review act or unilaterally lift sanctions and trust Iran to then return to compliance, he wrote in RealClear World in March. According to the act, if both chambers pass a resolution to disapprove of the deal, "the president cannot provide sanctions to relief to Iran for 12 days after the resolution's passage. If the president vetoes the resolution of disapproval, he cannot lift sanctions for 10 days following the veto.

Congress has the option to force votes on reimposing sanctions at the end of the 90-day periods if they do not receive a certification from the president, per the review act. This could lead to continued pressure on any Biden administration deal with the Islamic Republic, according to Rademaker.

“Some in Congress are sure to call for reimposition of U.S. sanctions if Biden’s policy does not produce obvious results, and INARA will give them a mechanism to force the issue to a vote,” he wrote.

A return to the JCPOA as it existed in 2015 is sure to run into opposition in Congress. Earlier this month, Democratic Sen. Bob Menendez of New Jersey, who heads the Senate Foreign Relations Committee, and Republican Sen. Lindsey Graham of South Carolina wrote an op-ed in The Washington Post arguing for a broader Iran nuclear deal that would also curb Iran’s regional and security policies. This built on a March letter they wrote to Biden, which argued for a new Iran nuclear deal that would also limit Iran’s support for proxy groups in the Middle East and its ballistics missile program.

One Iran analyst said that how Biden approaches the deal will determine how it is received by Congress. Republicans will not be satisfied if the talks in Vienna only yield Iranian compliance with the JCPOA in exchange for the removal of sanctions, said senior Middle East analyst Jason Brodsky of Iran International TV.

“The Biden administration has an opportunity to create a more durable Iran policy — one that has buy-in from Democrats and Republicans,” Brodsky told Al-Monitor on Tuesday. “But if the result in Vienna is indeed mere mutual compliance-for-compliance, they will be alienating Republicans right out of the gate and risk inflaming the partisan divide on the issue even further.”

Blinken testified before the Senate Foreign Relations Committee last week and said that returning Iran to compliance with the JCPOA would be a “first step, not a last step.” This could indicate the administration is willing to build on the original deal into something more comprehensive and Blinken has promised to create a “stronger” deal than the one in 2015.

Brodsky said that a future president could again tear up the deal if it is not strengthened.

“Menendez is already expressing frustration that the administration has not defined how it will get from the JCPOA to a longer and stronger deal as it pledged,” he said. “Without one, the administration is paving the way for a future president to withdraw, as history has shown.”

The White House and the State Department did not immediately reply to Al-Monitor’s requests for comment on the House Republicans’ letter and the review act’s status. There could be a political battle if the Biden administration decides any future Iran deal is not covered by the law.

“This most recent letter from House Republicans is firing a warning shot, and we may even see a legal challenge if the administration decides to circumvent Congress by just arguing it's mutual compliance-for-compliance and not covered by” the review act, Brodsky said.