The House today passed a bill that could undermine the Iran nuclear deal by complicating civilian aircraft sales to Iran, but its future in the Senate remains murky. 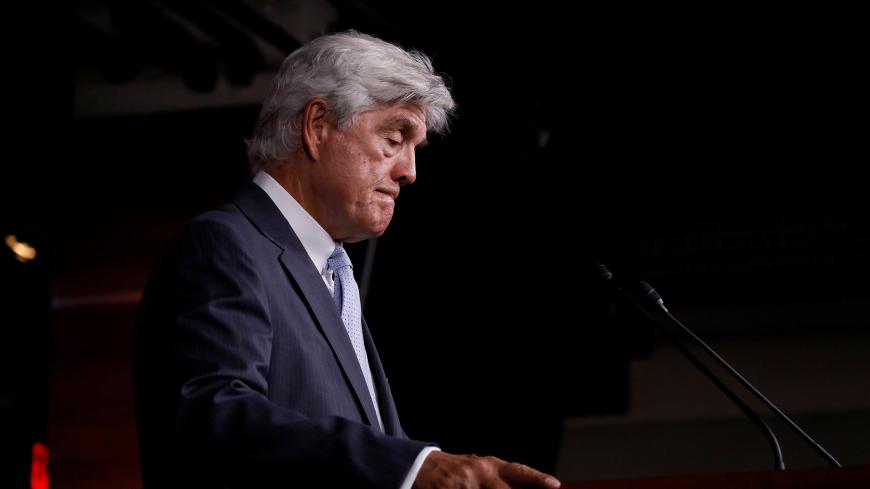 The House passed a bill today that could inhibit the sale of commercial aircraft to Iran, potentially running afoul of the landmark 2015 nuclear accord.

A total of 23 Democrats joined their Republican counterparts to pass the bill from Rep. Roger Williams, R-Texas, 252-167. But the bill’s future is unclear in the Senate, where final passage would be contingent on the support of Democrats who have resisted Republican efforts to alter or withdraw from the Joint Comprehensive Plan of Action (JCPOA).

Republicans need the support of at least eight Democrats to get the bill through the Senate’s 60-vote threshold. They’ve already lost a key supporter in Sen. Ben Cardin, D-Md., the top Democrat on the Foreign Relations Committee.

“Sen. Cardin is not supportive of legislation that would violate the United States’ obligations under the JCPOA, which this bill would appear to do since the civilian aircraft issue was specifically called for in the agreement,” Sean Bartlett, a spokesman for Cardin, told Al-Monitor. “Though he opposed the original agreement, since it was entered into he has repeatedly called for rigorous US oversight and compliance.”

Sen. Ted Cruz, R-Texas, and Sen. David Perdue, R-Ga., introduced identical legislation in the Senate at the end of last month. However, Senate leadership has made no guarantees that the bill will make it to the floor, and the Senate Banking Committee has yet to commit to advancing the bill.

“We’re continuing to press the issue with our colleagues,” Cruz told Al-Monitor.

Proponents of the bill reject the assertion that the legislation constitutes a violation of the nuclear deal.

"This doesn't keep anybody from selling anything," Rep. Williams told Al-Monitor. "It’s not going to stop the sale. It’s just going to make it jump through another hoop, maybe because Iran is the enemy, and I just think it’s bad business to be able to do business with them.”

While the bill does not explicitly prevent the sale of civilian aircraft to Iran, a November Congressional Research Service report noted that “some experts argue that the bill might potentially act as a brake on the willingness of the Treasury Department to license aircraft sales to Iran and in doing so possibly cause Iran to accuse the United States of breaching its JCPOA commitment for the United States to sell such aircraft to Iran.”

The JCPOA explicitly allows US companies to sell civilian airliners to Iranian firms. The sales were a key incentive for Iran to sign onto the deal because Tehran is eager to replenish its civilian airliner fleet, which has been decimated by decades of sanctions.

The legislation directs the secretary of the Treasury to certify to Congress that its licenses for commercial aircraft sales to Iran do not pose a money-laundering or terrorism risk. The House also passed an amendment requiring certification that the sale does not benefit anyone who has “knowingly transported items used to establish in Syria a permanent military presence of either Iranian military forces or Iranian backed militia.”

To make the certification, the Treasury Department must also verify that sales don’t benefit any Iranian person who “knowingly provided transportation services or material support” for Iranian individuals designated under US sanctions.

Advocates of the deal fear that this broad certification requirement would make it politically unfeasible for the Treasury Department to issue licenses for Iranian civilian aircraft sales, since the department would have to certify that no sanctioned Iranian individual flew on a commercial airline. And issuing a license without the accompanying certification could trigger congressional blowback.

“The authors of the legislation know that the [Treasury] secretary would likely be unable to make that certification,” Costello told Al-Monitor. “Their clear intention is to cancel the sales, even though doing so would harm American security and jobs.”

The Treasury Department has already licensed a $17 billion sale of 30 Boeing 777s to Iran Air, an agreement finalized in December 2016. The Barack Obama administration had sanctioned the state-owned airline in 2011 for shipping military equipment to Syria to support Bashar al-Assad’s regime but removed the designation as part of the JCPOA. Mahan Air, a privately owned Iranian airline, remains under US sanctions for similar alleged activity.

Boeing also agreed to sell 30 Boeing MAX aircraft to Iran’s Aseman Airlines in April but is still waiting on the Donald Trump administration to issue a license.

“Allowing the sale of aircraft also allows our manufacturers to compete for more than $35 billion in new businesses that can support American jobs,” Rep. Danny Heck, D-Wash., said ahead of the vote. Boeing operates a large manufacturing site in Heck’s home state.

The Treasury Department also must issue licenses for foreign aircraft manufacturers, such as the European firm Airbus, to sell aircraft to Iran if their planes use US parts. In June, Airbus agreed to sell 45 aircraft to Iran’s Airtour Airline and another 28 to Zagros Airlines.

“If we block them,” Heck argued, “we hand that market to foreign competitors who can restructure their production lines easily to circumvent US regulation and lose the extra insurance we’ve received from having Americans provide the maintenance and support on those planes.”

To date, the Trump administration has yet to issue new licenses for any of the civilian aircraft sales agreed to this year. Furthermore, the legislation would also require the Treasury Department to retroactively certify licenses issued under the Obama administration, prompting the bill’s opponents to argue that it potentially violates a constitutional provision against retroactively applying a new law to prior activity.

Earlier this year, the House passed an amendment to an annual House spending bill that would outright ban the sale of civilian aircraft to Iran. However, the provision is not in the Senate appropriations bill and its final passage is tenuous as Republicans and Democrats must still agree upon a final spending deal for 2018.

Another Iran bill, which the House passed 289-135 on Wednesday, also garnered substantial Democratic opposition and faces uncertain prospects in the Senate.

The Iranian Leadership Asset Transparency Act, introduced by Rep. Bruce Poliquin, R-Maine, would require the Treasury Department to publicly report on the assets and money-laundering activities of sanctioned Iranian officials and post its findings in Farsi, Azeri, Arabic and English. The House passed a similar bill last year, prompting the Obama White House to issue a veto threat. The Senate, however, did not advance that bill.

“The true purpose of this legislation is to create reputational risk for companies that might seek to do legitimate business with Iran,” Rep. Maxine Waters, D-Calif., the top Democrat on the House Financial Services Committee, argued ahead of the vote. “For this reason, the bill would be a strategic mistake as its report would undoubtedly be seized upon by Iran as an international effort to discourage international investment.”