A number of Democrats appear willing to join Republicans in setting conditions on aircraft sales to the Islamic Republic. 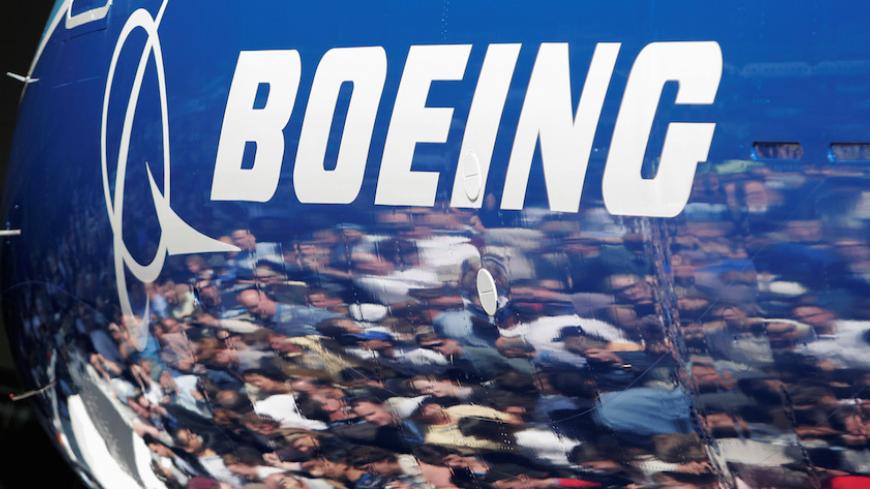 Invited guests for the world premiere of the Boeing 787 Dreamliner are reflected in the fuselage of the aircraft at the 787 assembly plant in Everett, Washington, July 8, 2007. - REUTERS/Robert Sorbo

A number of House Democrats joined their Republican colleagues July 7 in expressing support for setting conditions before the manufacturing giant can proceed with its $17.6 billion deal to sell 80 passenger aircraft to Iran Air. The Obama administration insists it has the tools to ensure that any planes won't be diverted to unapproved purposes, but lawmakers of both parties are showing an interest in requiring Iran to meet certain criteria before the Treasury Department approves any sale.

"We're being asked to transfer planes to a company, Iran Air, that has served as an air force for terrorism. And we're being told, oh, but just trust them, or just trust that we'll be able to do something if they violate," Rep. Brad Sherman, D-Calif., said at a hearing of the Financial Services Committee's trade panel. "When Iran comes forward with a plan to guarantee that these planes are not being used for terrorism or to support [Bashar al-] Assad [in Syria], then we could consider [granting export licenses]."

While Sherman opposed the nuclear deal that paved the way for the Boeing sale, several supporters also raised concerns.

"What kind of things would you expect to see in the license to make sure that planes are not available for any kind of illicit or illegal activities under the agreement or any other sanctions legislation?" Rep. Ed Perlmutter, D-Colo., asked the panel of witnesses. Perlmutter stayed on after the hearing for a lengthy, spirited discussion with several of the witnesses about the best way forward without violating the nuclear deal.

And the top Democrat on the panel, Rep. Gwen Moore of Wisconsin, thanked the witnesses for helping inform lawmakers regarding actions "we might want to do in terms of tightening up on the licensing."

Democrats in the Senate have also raised some concerns about the sale.

"Of course I have concerns that the Iranians will misuse any assets," nuclear deal supporter Chris Coons, D-Del., told The Weekly Standard. "You can't assure that [the planes] won't be used for terrorism."

The Obama administration has argued that the sale could create goodwill in Iran by helping to modernize the country's notoriously unsafe airline sector. But Mark Dubowitz of the hawkish Foundation for Defense of Democracies testified July 7 that Iran Air is still flying arms to Assad on behalf of the Islamic Revolutionary Guard Corps.

Republicans are delighted by what they describe as Democratic hand-wringing.

"The Democrats are finding themselves caught in a box," panel Chairman Bill Huizenga, R-Mich., told Al-Monitor after the hearing. "And they now want to start adding provisions."

Officially, Republicans intend to push forward with legislation from Rep. Peter Roskam, R-Ill., that would flat-out prohibit any aircraft sale to Iran — a clear violation of the text of the nuclear deal as long as Iran officially remains in compliance.

"I would guess that a number of my colleagues — myself included — would be where we have been all along, which is this is a bad idea, why in the world would we do any kind of license?" Huizenga said. He said action on the measure could happen as early as next week, before the US Congress leaves for the long summer recess.

Nevertheless, the July 7 hearing also laid the groundwork for potential bipartisan compromise. While the nuclear deal commits the United States to "allow for the sale of commercial passenger aircraft and related parts and services to Iran," it also prohibits their use "for purposes other than exclusively civil aviation."

Dubowitz argued that this caveat offers Congress plenty of room to legislate a cooling off period during which Iran would have to disentangle its airlines from prohibited activities before aircraft sales can go through. Allowing such sales up front, he said, would be "theoretically possible, but practically delusional" — especially with Boeing and its financial backers breathing down policymakers' necks not to wreck relations with Iran once the planes are actually delivered.

"The history of Iran sanctions over the past decade has been one party stepping forward and offering a tough-minded bill," Dubowitz told Al-Monitor, "and then that bill being used as a platform between Democrats and Republicans to negotiate."

Reaching a bipartisan compromise that can get 60 votes in the Senate won't be easy, however. Moore, for example, argued that allowing Boeing sales to go through could give the United States more leverage than if Iran gets everything it needs from Europe's Airbus; Perlmutter said the Iran deal was a "contract" the United States would be ill-advised to violate.

Still, the evolving threat to the Boeing deal has caught the attention of nuclear deal advocates. In response to the Financial Services hearing and separate pending legislation prohibiting the Treasury Department from issuing licenses for aircraft sales, the National Iranian American Council (NIAC) issued a scathing response.

"It is no secret that opponents of the Iran nuclear accord continue in their attempts to upend US obligations under the agreement," NIAC said in a statement. "By attempting to block Boeing’s pending sale of commercial passenger aircraft to Iran, opponents of the Iran nuclear accord are also seeking to undermine significant US commercial interests and to impose humanitarian suffering on the Iranian people by denying them access to safe air travel."