US, Europe huddle on Iran after Trump ultimatum

The United States and major European powers are holding working group consultations to explore cooperation on Iran, but the Europeans say they will not renegotiate the nuclear deal. 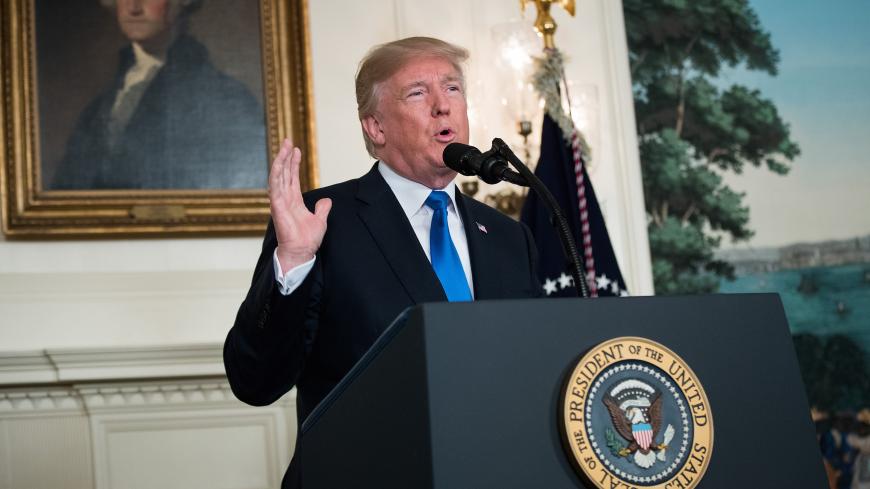 US President Donald Trump makes a statement on the administration's strategy for dealing with Iran, in the Diplomatic Reception Room in the White House, Washington, Oct. 13, 2017. - GETTY/Drew Angerer

WASHINGTON — In the wake of US President Donald Trump's warning this month that he would not waive US sanctions on Iran again unless the nuclear deal was fixed, diplomats from the United States and key European powers are holding working group consultations on Iran, possibly in London later this week, to see what they can come up with. Officials and experts say the Europeans are willing to explore cooperation with the United States to try to address shared concerns about Iran, such as its ballistic missile program and alleged arms shipments to Yemen’s Houthi rebels, but continue to resist Trump’s demands to renegotiate the 2015 nuclear accord, which they believe is working.

While some experts say that the Europeans have nothing to lose by trying to see if there are positions and actions that would keep the United States on board the agreement, others are urging Europe to instead take steps to insulate its companies from the threat of US secondary sanctions. (The next waiver deadline for US nuclear-related Iran sanctions is May 12.) Looming over everything is concern that an erratic and unpredictable Trump may not be satisfied no matter what fixes Congress and the Europeans are able to come up with.

“What the Europeans are indicating to me, is this is part of the tactic to keep the US president on board, [but] we are being very clear this is not a reopening of the negotiations,” Ellie Geranmayeh, an Iran expert with the European Council on Foreign Relations, told Al-Monitor in a phone interview from London today regarding the transatlantic consultations.

“My sense on what is happening on the European front right now is to say to the Americans … ‘Look, we will open up talks with the US as part of a transatlantic working group. … We can maybe persuade the US president we are working together on addressing other areas of concern, like ballistic missiles, but in a completely separate track to the JCPOA [Joint Comprehensive Plan of Action],'" Geranmayeh said, using the acronym for the formal name of the nuclear accord. “So, not reopening or a renegotiation of the agreement, but it is a side agreement, with the potential, the hope, to bring in Iran at some stage.”

“I think essentially what is happening, it is a tactic to try to muddle through beyond [the next US sanctions waiver deadline in] May with the [US] president on board,” Geranmayeh said. “With the hope ideally that the president will see [his] concerns are being met. … The European powers opened up discussions on these other issues [but] without undermining the deal.”

Trump, in a White House statement Jan. 12 announcing his decision to waive US-nuclear related sanctions on Iran, delivered an ultimatum to Congress and the Europeans to either address flaws in the accord and toughen their policies to Iran or he would exit the deal.

“Today, I am waiving the application of certain nuclear sanctions, but only in order to secure our European allies’ agreement to fix the terrible flaws of the Iran nuclear deal,” Trump said in a statement Jan. 12. “I will not do so again.”

“I hereby call on key European countries to join with the United States in fixing significant flaws in the deal, countering Iranian aggression, and supporting the Iranian people,” Trump’s ultimatum continued. “If other nations fail to act during this time, I will terminate our deal with Iran.”

French Foreign Minister Jean-Yves Le Drian, meeting with Secretary of State Rex Tillerson in Paris on Tuesday, expressed mild contempt for Trump’s ultimatum to Europe and Congress to fix a deal that Trump's administration has neither managed to negotiate nor pledged to honor.

“There is a basic principle on which we are very firm, it’s the upholding of the [nuclear deal] to the extent it is respected,” Le Drian said. “If it is respected by Iran — which is what the IAEA [International Atomic Energy Agency] says, and we don’t have any reason not to believe it — the signatories must stand by their word. Because when an agreement is signed, each signatory must respect it.”

Le Drian “also questioned why the Trump administration is ‘kicking the ball back to Congress and the Europeans,’ when Russia and China also signed the deal,” the Associated Press reported.

“I’d say there was a pretty wide measure of agreement on the European side about the need to look at what Iran is doing on the ballistic missile front and to work out what we can do collectively to constrain that activity and to make a big difference there,” Johnson said at a meeting with Tillerson on Monday. “And we think we can do that; we think we can do that together. But as Rex says, it’s important we do that in parallel and don’t vitiate the fundamentals of the Iran nuclear deal, and we’re sure we can do that.”

“Regarding Iran … cooperation between the E3 [United Kingdom, France and Germany] and the US has always been essential,” a senior European diplomat, speaking not for attribution, told Al-Monitor by email. “It is still the case.”

Tillerson, speaking to reporters en route to Paris on Monday, acknowledged that the three European parties to the JCPOA — the British, French and Germans — may not feel obliged to act on a timetable driven by US domestic political considerations and sanctions waiver deadlines.

“Obviously … the US is under a bit of a timetable to deliver on what the president is looking for, but … we can’t set timetables for others,” Tillerson said. “I mean, they’re sovereign governments.”

The US-E3 working group “is just a continuation of the exchange of views on how we can address these flaws in the nuclear agreement, what kind of mechanisms could we use, but also how can we cooperate more on countering Iran’s activities that are not related to the nuclear program, our concerns about their arms exports to Yemen and elsewhere,” Tillerson said. “I think maybe what we’re doing is we’re formalizing these groups to put a little bit more of structure around our working together to see what we can do together.”

The US delegation to the consultations with the Europeans on Iran this week is expected to be headed by State Department policy planning chief Brian Hook, and to include Deputy Assistant Secretary of State for Iran and Iraq Andrew L. Peek, and policy planning office Iran experts Matthew McInnis and David Tessler.

“From the European perspective, they have to make the assumption that the deal is almost dead anyway,” Nephew said. “It’s worth seeing if there are outcomes that could potentially work. It’s hard for anyone to do more damage to it.”