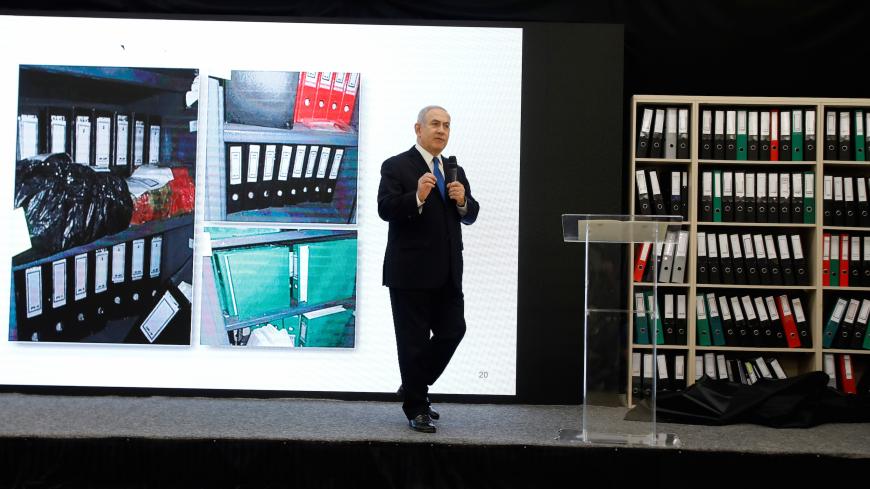 WASHINGTON — European powers and Russia said Tuesday that Israel Prime Minister Benjamin Netanyahu’s claim that Israel has obtained a 50,000-plus page archive of Iran’s pre-2003 nuclear weapons research from a storage warehouse in Tehran only proves the need to maintain the Iran nuclear deal. But European reaction to Netanyahu’s televised presentation Monday comes as diplomats see growing signs that US President Donald Trump will not issue Iran nuclear-related sanctions waivers this month and instead announce he is withdrawing from the deal.

“The deal was put in place exactly because there was no trust between the parties, otherwise we would not have required a nuclear deal to be put in place,” European Union foreign policy chief Federica Mogherini said.

“The relevance of this [Iran nuclear] agreement is heightened by the information Israel has presented,” a French Foreign Ministry representative said Tuesday.

"All documents presented by Netanyahu were available and known to the IAEA, which after a comprehensive ten years study found no indications of Iran having conducted activities linked to a nuclear weapons program," Baeidinejad wrote Tuesday on Twitter. "IAEA decided accordingly to permanently close the issue in 2015."

European efforts to keep Trump in the deal were at the forefront of visits to the White House last week by French President Emmanuel Macron and German Chancellor Angela Merkel. But Macron acknowledged in a press conference upon his departure that he did not think he had succeeded.

"My view [is] … that he will get rid of this deal on his own, for domestic reasons," Macron said April 25. "My view is that there is a big risk he will leave."

Trump is expected to not issue the waivers this month, but to not immediately reimpose sanctions, which can take as long as 180 days to go into effect. He will then urge the Europeans in the meantime to try to negotiate a more comprehensive deal with Iran that addresses concerns about Iranian behavior not covered in the Joint Comprehensive Plan of Action (JCPOA). Those concerns include “sunsets” that let Iran expand its enrichment capacity after a decade, ballistic missile proliferation, and Iran's presence and support for militant proxy groups in Syria, Lebanon and Yemen.

“What I have been led to believe is Trump will withdraw from JCPOA, but not engage in snapback [of sanctions], to give the Europeans time to talk to the Iranians, to address other aspects [of Iranian behavior] left untouched by the deal,” Pooya Dayanim, an Iranian American pro-democracy activist who last week met with groups lobbying the US administration to toughen or abandon the nuclear accord, told Al-Monitor.

“They are going to have the Europeans approach Iran and propose, let’s bring other issues … and have a comprehensive agreement,” Dayanim said, adding that the Trump administration thinks Iran is weak enough to come to the table again.

Former State Department Iran expert Suzanne Maloney also believed Trump was likely to not issue the waivers this month, but stressed that Trump is unpredictable. She also said the administration’s apparent plan to then pressure the Europeans to try to negotiate a bigger deal with Iran before the sanctions kick back into place is unlikely to work.

“Nobody really knows what Trump is going to do. I say that with reasonable confidence about the people around him,” Maloney, now with the Brookings Institution, told Al-Monitor. “Netanyahu played to his sweet spot and complete loathing of the deal and conviction that it was a fraud from the beginning. But [French President Emmanuel] Macron also succeeded a little bit more than initial reviews gave him credit for.”

Trump’s “inclination has always been renegotiation, not rip up,” Maloney said. But the administration’s apparent approach to pressure the Europeans and Iranians into a renegotiation is “a long shot. I think it will almost certainly implode. There is almost no chance this could succeed.”

“The world is not going to explode on May 13,” Maloney said. “But there will be an intensification of what we have been seeing over the course of the past few weeks: Everyone trying to find a way to fix it. … There will be a month of frantic maneuvering and diplomacy to try to salvage diplomacy from the ashes of whatever decision Trump makes.”

Newly confirmed Secretary of State Mike Pompeo, speaking to journalists as he arrived at Andrews Air Force base Monday from a weekend trip to NATO, Saudi Arabia, Israel and Jordan, said his team was still trying to reach an agreement with the Europeans on a deal to toughen policy toward Iran. But he hinted that transatlantic relations might soon get tested by Trump withdrawing from the Iran deal.

“We’re working diligently to fix this thing,” Pompeo said. “I mean, on the plane we’ve been working to try and get language right that will address President Trump’s concerns. So we’re still working our way there.

“We’ve had lots of conversations with the Europeans,” Pompeo continued. “We share the same end goal to keep the Iranians from ever having a nuclear weapon. I am confident that we will continue to have good relations with our European partners should the president choose to pull out of this.”