In a tweet, US President Donald Trump threw transatlantic consultations on Iran into disarray March 13 with his surprise decision to fire Secretary of State Rex Tillerson. 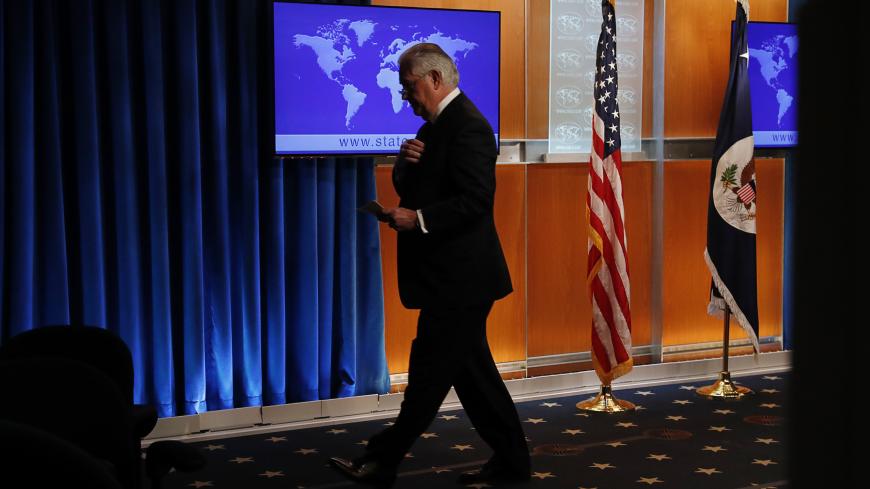 US Secretary of State Rex Tillerson departs after speaking to the media at the US State Department after being fired by President Donald Trump in Washington, March 13, 2018. -

WASHINGTON — US President Donald Trump’s surprise firing of Secretary of State Rex Tillerson by tweet today — just a few hours after Tillerson returned from a trip to Africa — threw yet another wrench into transatlantic consultations on Iran that had been gaining traction.

A US delegation led by Tillerson’s policy planning chief Brian Hook was slated to meet in Berlin on Thursday for the next round of consultations on Trump’s Iran demands between the United States and the three European countries, or E3, that helped negotiate the 2015 Iran nuclear deal, Britain, France and Germany. On Friday, the eight-member Joint Commission overseeing the Iran nuclear deal's implementation is supposed to hold its quarterly meeting in Vienna.

Tillerson, sounding shaken in remarks in the State Department press room this afternoon, said he was urging the department’s policy team and department heads to stay. He would be turning over most of his duties to Deputy Secretary of State John Sullivan tonight, and working to ensure a smooth transition to Secretary-designate Mike Pompeo when Tillerson's tenure concludes at the end of the month.

“I’m encouraging my policy planning team and undersecretaries and assistant secretaries — those confirmed as well as those in acting positions — to remain at their post and continue our mission at the State Department in working with the interagency process,” Tillerson said. “I will be meeting members of my front office team and policy planning later today to thank them for their service.”

A State Department official as well as a European diplomat said that as far as they knew, the Berlin and Vienna consultations this week would go ahead.

But a second State Department diplomat, speaking not for attribution, said he anticipated that Hook would eventually leave after Tillerson does. Hook did not respond to a query.

Trump singled out differences over Iran policy as one of the reasons he and Tillerson have sometimes found themselves at odds, even while he said he wished Tillerson well and considered him a good man.

"Rex and I have been talking about this for a long time,” Trump told reporters as he was boarding a helicopter to travel to California today. “We got along, actually, quite well, but we disagreed on things. When you look at the Iran deal; I think it's terrible, I guess he thought it was OK. I wanted to either break it or do something and he felt a little bit differently.”

"We were not really thinking the same,” Trump said. “With … Mike Pompeo, we have a very similar thought process. I think it's going to go very well. Rex is a very good man. I like Rex a lot. I really appreciate his commitment to service and I'll be speaking to Rex over a long period of time."

Allied diplomats could only shake their heads at the latest chaos emanating from Trump’s Washington. They had already felt under time pressure to try to see if they could come to an understanding to meet Trump’s Jan. 12 ultimatum to toughen policy on Iran or he would not issue the required sanctions waivers at the next deadline on May 12.

“We do have good progress with the US administration on a number of issues, and capacity to be together,” a European diplomat, speaking not for attribution March 9, said of the progress to date in the US-E3 consultations on Iran.

“One, for us, we want to keep JCPOA [Joint Comprehensive Plan of Action]. We don’t want to renegotiate, and we don’t think it is feasible,” the European diplomat said. “But once we’ve said that, we share all the concerns on missiles, regional destabilization, terrorism … and we are ready to take steps to address those concerns.”

But while in the short term Trump’s firing of Tillerson puts the transatlantic Iran consultations in disarray, ultimately, the appointment of Pompeo as Trump’s top envoy may prove a more authoritative negotiator for European allies because he can speak more reliably for the president.

Iran was not the only issue that Trump and Tillerson found themselves at odds over, current and former diplomats said. Tillerson, as well as Secretary of Defense Jim Mattis, had served as a check on Trump’s initial, sharp tilt in favor of the United Arab Emirates and Saudi Arabia in their dispute with Qatar.

“I am not sure that the Middle East was a big part of Trump's rationale, but I think the timing is curious one week before [Saudi Crown Prince Mohammed bin Salman] hits town,” former US Ambassador to Yemen Gerald Feierstein told Al-Monitor, referring to the Saudi crown prince’s planned visit to the White House on March 20.

“We know the Saudis and Emiratis were unhappy with Tillerson's tilt toward Qatar,” Feierstein, now with the Middle East Institute, said. “But overall, I think Tillerson and Trump were just a poor match. … Tillerson is an establishment Republican on foreign policy and Trump isn't. Thus the use of [US Ambassador to the United Nations] Nikki Haley, a foreign policy tabula rasa, to speak for the administration, which we know annoyed Tillerson.”

Trump and Tillerson had clashed over Iran, North Korea and China policy over the past few months, another former US diplomat said.

“Trump wanted to get out of the Iran deal, Tillerson thought that was a bad idea,” the former US diplomat told Al-Monitor. “On China, the secretary [Tillerson] believes the president is leading us into an economic conflict with the most important country to our own economy.”

This month, Gary Cohn, the chairman of Trump’s National Economic Council, also announced he was leaving the administration, partly in opposition to Trump’s decision to impose tariffs on aluminum and steel.

Tillerson, the former chief executive of Exxon Mobil, said he would return to private life and the private sector. He had been in Texas last week for the funeral of his father.

Tillerson’s rocky tenure with the White House continued even as he said he was turning over his duties to his deputy today. Steven Goldstein, undersecretary of state for public diplomacy, was also dismissed today after he issued a statement saying Tillerson was unaware of the reason he was being dismissed. The White House insisted that White House chief of staff John Kelly had called Tillerson on Friday in Africa to inform him to expect a tweet concerning his status.

The White House announced that it has designated State Department spokesperson Heather Nauert to be acting Under Secretary of State for Public Diplomacy.