Secretary of State Rex Tillerson defended the White House’s proposal to slash the State Department budget by almost 30%, a move that could have serious repercussions on Middle East diplomacy. 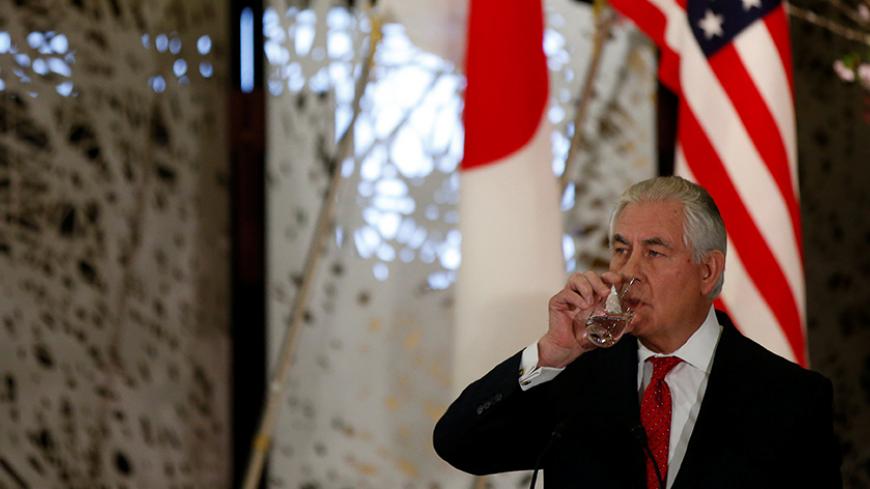 WASHINGTON — Secretary of State Rex Tillerson, speaking March 16 in Japan in one of his first press availabilities since becoming America’s top diplomat, offered support for a Trump administration proposal to slash the State Department’s budget by almost 30%.

The White House proposal to cut the core State Department and US Agency for International Development (USAID) budget from $36.7 billion in 2017 to $25.6 billion in fiscal year 2018 reflects the Trump administration’s expectation that the United States will be involved in fewer military conflicts overseas and that other countries will be contributing more for foreign assistance, Tillerson said.

“I think clearly, the level of spending that the State Department has been undertaking in the past — and particularly in this past year — is simply not sustainable,” Tillerson told journalists at a press availability with Japanese Foreign Minister Fumio Kishida in Tokyo on March 16.

“So on a go-forward basis, what the president is asking the State Department to do is … reflective of a couple of expectations. One is that as time goes by, there will be fewer military conflicts that the US will be directly engaged in,” Tillerson said. “And second, that as we become more effective in our aid programs, that we will also be attracting resources from other countries, allies, and other sources as well to contribute in our development aid and our disaster assistance.”

Tillerson, the former chairman of ExxonMobil, expressed confidence that US diplomats could do more with less. “I’m confident that with the input of the men and women of the State Department, we are going to construct a way forward that allows us to be much more effective, much more efficient and be able to do a lot with fewer dollars,” he said.

But Tillerson’s trip to Asia — his first as secretary and one focused on the threat posed by North Korea’s nuclear and ballistic missile program — reflects the stark challenges confronting US foreign policy and a world in which the threat of conflict does not look to be quickly receding.

Tillerson is also conducting shoestring diplomacy notably short-staffed, with no nominations to date from the White House for his deputy secretary of state, undersecretaries of state or any assistant secretary of state.

Those nominations have not been forthcoming since the White House rejected Tillerson’s pick of Elliot Abrams to be his deputy secretary of state early last month. The White House this week similarly rejected Secretary of Defense Jim Mattis’ pick of veteran diplomat Anne Patterson, a former US ambassador to Egypt and Pakistan, to be his undersecretary of defense for policy, the No. 3 job at the Pentagon. Patterson was reportedly perceived by some in the Trump White House to have been associated with the policy of trying to work with Egyptian President Mohammed Morsi — an Islamist who was deposed in 2013 after being elected in 2012 — when she was ambassador in Cairo. (The Trump White House had initially mulled designating the Muslim Brotherhood — of which Morsi was a member — as a terrorist group, though that idea appears to have been shelved for now.)

The Pentagon spokesman made clear Mattis had recommended those nominated for their posts.

"These are all highly qualified individuals who were personally recommended by Secretary Mattis to the president for nomination,” Pentagon spokesman Capt. Jeff Davis said in a statement March 16.

The situation may similarly soon resolve at the State Department, but word of mouth from former diplomats is there is a surprising lack of names circulating for top appointments.

“I haven't heard any names circulating,” Gerald Feierstein, a former US ambassador to Yemen and former principal deputy assistant secretary of state for Near East policy, told Al-Monitor.

Feierstein, now a senior fellow at the Middle East Institute, wondered, “Have we considered the possibility that the Trump [White House] doesn't want anyone in confirmed positions answerable to Congress?” Feierstein also said, “I understand that they've got people in place at State, DoD [Department of Defense] and elsewhere in unconfirmed positions where they never have to expose themselves to any oversight, answer questions or do anything except the White House bidding. It seems to me that we've yet to see any real interest on the part of the White House to actually start filling Senate-confirmed positions.”

Another former senior State Department official said his impression was that Trump was not inclined to intervene to break the stalemate between Cabinet chiefs and White House office of personnel officials over their picks.

“My theory is not that they don’t want people in the jobs,” a former Obama State Department political appointee, speaking not for attribution, told Al-Monitor. “I think that fundamentally what we are looking at is, Trump told his Cabinet chiefs, you can pick your own team. … And then the White House folks kill everything. And Trump is not making a decision.”

“He is making a decision by not making a decision,” the former Obama political appointee continued. “He won’t break ties. He won’t engage, negotiate, to get some kind of agreement. … The end result is this … stalemate.”

Then again, the Trump White House’s appreciation for the State Department, and the expensive conflicts US diplomats try to help avoid, could grow over time.

While the Trump/Tillerson State Department has generally decided to have fewer “special envoy” positions, the Trump White House’s special representative for international negotiations, Jason Greenblatt, has been conducting a trip to Israel, the West Bank and Jordan this week, meeting with Israeli, Palestinian and Jordanian officials and citizens to try to formulate a US policy to advance Israeli-Palestinian peace. Greenblatt, who has been documenting his Mideast trip with interesting photos and postings on Twitter, made a point of thanking the State Department, the US Embassy in Tel Aviv, the US Consulate in Jerusalem and the US Embassy in Jordan as he wrapped up his visit March 16.

“Thank you @StateDept @usembassyta @USCGJerusalem @USEmbassyJordan & #NSC for your help in coordinating my extremely positive trip this week,” Greenblatt posted on Twitter on March 16.

Eliot Engel, the ranking Democrat on the House Foreign Affairs Committee, said he had made a similar point to Tillerson when they spoke by phone last week and Engel voiced his objections to the administration's proposal to cut the State Department budget. Diplomacy can be a lot cheaper than war's cost in blood and treasure.

“The world can be a dangerous place,” Engel said in testimony at a House Appropriations Subcommittee on State, Foreign Operations and Related Agencies meeting March 16. “The men and women who wear our uniform put their lives on the line to protect our country. So we owe it to them to exhaust every possible option before we send them into harm’s way.”

Sen. Bob Corker, R-Tenn., the chairman of the Senate Foreign Relations Committee and an ally of both Trump and Tillerson, also expressed mild skepticism about the proposed steep cuts in the US diplomatic budget.

"I believe we can strike an appropriate balance that recognizes the critical role of diplomacy in keeping our military out of harm’s way and appropriately advancing our nation’s interests while ensuring taxpayer dollars are used in the most efficient and effective manner," Corker said in a statement March 16.