Day-to-day responsibility for managing the Yemen conflict is being passed on to John Rood, the Pentagon’s No. 3 official. 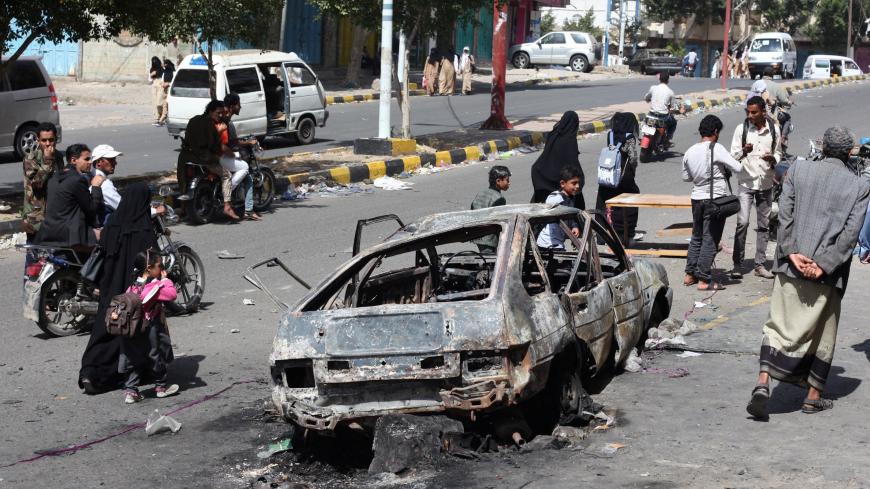 Onlookers look at a car burned up by a blast in the war-torn southwestern city of Taiz, Yemen, Jan. 22, 2019. - REUTERS/Anees Mahyoub

Just hours before the United Nations struck a Yemen cease-fire deal last month, then-Defense Secretary Jim Mattis made a whirlwind series of calls to Arab leaders to help clinch a pact that he’d privately and publicly pressed for months.

His successor plans to take a less direct role in trying to settle the conflict.

As renewed clashes between the Saudi-led coalition and the Houthi rebels threaten to wipe out the fragile truce in the key port city of Hodeidah, Acting Defense Secretary Patrick Shanahan has deputized John Rood, the department’s No. 3 official, to engage with the UN on Yemen, a senior defense official told Al-Monitor.

Now some experts worry that Shanahan and Rood, both former defense industry executives, lack the contacts and credibility with Arab allies needed to salvage the deal as Yemen’s warring parties refuse to pull their troops out of Hodeidah. While Shanahan built his career before the Department of Defense at Boeing, Rood spent much of his 20-year government career focused on missile defense and nonproliferation.

“This is exactly the moment where you need another pylon of diplomatic effort from the US,” said Barbara Leaf, the US ambassador to the United Arab Emirates during the Barack Obama administration. “I’m very concerned that Mattis’ departure leaves a void in that sense.”

Defense officials insist that the Pentagon is not taking emphasis away from a Yemen peace deal by allowing Rood to run point with the UN. Shanahan and Martin Griffiths, the UN envoy for Yemen, spoke directly Sunday, their first conversation since the acting secretary assumed office.

“This is not a downgrade to DoD’s prioritization on Yemen,” a senior defense official told Al-Monitor. “There is no change in terms of the priority of effort for ongoing operations.” Rood’s handling of the portfolio, the official said, is a reflection of Shanahan’s confidence in his undersecretary.

Mattis mostly played a backstage role in the Yemen war before Secretary of State Rex Tillerson was dismissed in March, pressing the Saudis to limit civilian casualties and draw up no-strike lists. But the retired Marine general went public with his push for a UN-brokered settlement as the country’s famine escalated.

In remarks at the US Institute of Peace in October, Mattis publicly gave the Iran-backed Houthis and the Saudi-led coalition a 30-day deadline to strike a cease-fire deal. The move followed months of behind-the-scenes pressure from Mattis and US Central Command chief Joseph Votel, warning the United Arab Emirates away from a full-scale invasion of Hodeidah.

The senior defense official said the Pentagon will continue regular engagements with Griffiths at the same pace as under Mattis, about once every two weeks. Under the new arrangement, Rood will report to the acting defense secretary before and after his conversations with the UN envoy, the official said.

But the Defense Department’s new leaders have not publicly emphasized the Yemen talks in recent weeks. Since assuming the job about three weeks ago, Shanahan, who served as Mattis’ deputy, has been consumed by the US withdrawal from Syria, a US official told Al-Monitor. Other Pentagon officials have emphasized a renewed focus on China as the Department of Defense prepares to submit its fiscal year 2020 budget proposal.

Rood is also likely to face a firestorm of criticism from Congress over US support to Saudi Arabia in Yemen, where some 10 million people face starvation.

House Democrats plan to reintroduce a challenge to the Trump administration’s war powers to support the Saudi-led coalition; the upper chamber passed a similar bill in December. The US administration cut off refueling support soon after that, but the United States still shares intelligence with the coalition in Yemen.

Mattis had pushed for the United States to waive human rights conditions for refueling support as a way to shed light on an uptick in civilian casualties tied to Saudi and Emirati bombings, but the State Department instead certified in September that the Saudi-led coalition had complied with a US law to cut down on innocent deaths.

“There’s a clear understanding that what’s happening in Yemen is damaging DoD’s position,” said Gerald Feierstein, a former US ambassador to Yemen who worked with Mattis when he commanded American troops in the Middle East. “DoD and Central Command in particular have a vested interest in seeing the Saudis clean up their act.”

The State Department could soon get a set of fresh faces to carry out diplomacy in the Middle East, after President Donald Trump nominated former Central Command chief John Abizaid to serve as US ambassador to Saudi Arabia and one-time Mitt Romney donor John Rakolta to become ambassador to the UAE. The White House also sent the nomination of David Schenker to serve in the State Department’s top Middle East role back to Congress; Sen. Tim Kaine, D-Va., had put a hold on the nomination.

But the White House has not announced any nominees to fill several of the Defense Department’s top policy jobs, challenging the Pentagon’s ability to forge a new path in the Middle East. Both Shanahan and his deputy, David Norquist, are serving in acting roles, leaving questions about how long they can remain in post without Senate confirmation. Rood’s principal Senate-confirmed policy adviser, Robert Karem, left his post in October, leaving behind an acting successor.

“I do hope the president nominates a full-time secretary of defense,” Eric Edelman, the Department of Defense’s No. 3 official during the George W. Bush administration, said at a panel Monday. “We just have to get to the point where we can fill all of those positions.”