A UN report alleging that the anti-Houthi coalition may have carried out war crimes could further erode support for US bomb sales and military support. 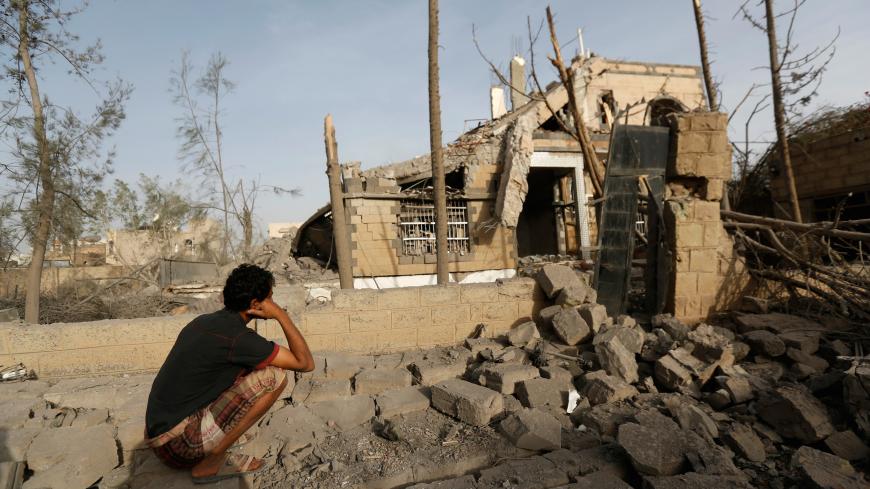 A man sits in front of a house destroyed by airstrikes in Sanaa, Yemen, June 6, 2018. - REUTERS/Khaled Abdullah

Fresh allegations of potential war crimes by the Saudi-led coalition battling the Houthi rebels in Yemen are putting strain on flagging US support for the mission.

With the Pentagon already increasing public and private pressure on Riyadh to cut down on civilian casualties, the UN Human Rights Council released a report today that found “little evidence” that Saudi Arabia or the United Arab Emirates took basic steps to protect noncombatants. The UN says the three-year air war has killed at least 6,475 people, and probably many more.

In particular, the report castigated Saudi Arabia and the UAE for failing to consult no-strike lists that include refugee camps and hospitals. The two countries, along with the Yemeni government and its Houthi foes, are also accused of a spate of crimes including rape, forced disappearances and arbitrary detention.

"The reality is that the battlefield is a humanitarian field,” Mattis said. “Our conduct there is to try to keep the human cost of innocents being killed to the absolute minimum.”

Mattis outlined remedies including “no fire” areas around hospitals and schools and a more rigorous Saudi-led targeting process. But these haven’t stopped airstrikes from being “the leading direct cause of civilian deaths and destruction of civilian infrastructure in the conflict,” according to the UN report, hitting residential areas, markets, religious sites, and other gatherings such as funerals and weddings.

Experts say Saudi Arabia’s perception of US military failings in the Middle East has sunk Washington’s credibility as it has sought to avert civilian casualties in Yemen.

“There is great frustration on the Saudi side that a country that fought a war in Iraq for 20 years and turned Raqqa and Mosul to rubble is telling the Saudis what to do in a country that’s on their border three years in,” a former senior US intelligence official told Al-Monitor. “They know they’re one lucky shot from having a missile from Yemen hitting their own preschool in Jazan.”

Those frustrations haven’t been eased by growing — and increasingly public — Pentagon skepticism about the air war. On Monday, Lt. Gen. Jeffrey Harrigian, the top US air commander in the Middle East, told The New York Times that Saudi officials “need to come out and say what occurred” in the Aug. 9 school bus strike.

“There it is. WAR CRIMES. Funded and facilitated by the United States,” longtime Senate war critic Chris Murphy, D-Conn., tweeted after the release of the UN report. “If we don't end our participation in the Yemen civil war now, what on earth will it take?”

Earlier this month, House Minority Whip Steny Hoyer, D-Md., and 27 other Democrats asked the Donald Trump administration for a briefing on the war with Mattis, Secretary of State Mike Pompeo and Director of National Intelligence Dan Coats in the first week of September. A Hoyer aide told Al-Monitor that House Democrats remain in talks with the administration about the briefing, but have yet to schedule a date.

UAE Ambassador to the United States Yousef al-Otaiba, who spent much of July telling Congress that his country would continue its assault against the Yemeni port city of Hodeidah if UN-backed talks broke down, has been echoing Saudi frustrations with Washington.

“For the last 10 years, there's a debate that's been going on in this country that the US doesn't want to get more involved, that there's still a hangover from Iraq and Afghanistan,” Otaiba said at the Aspen Security Forum in July. “When we hear that, it means we need to do things on our own.”

The battle lines near the port remain frozen as UN Yemen envoy Martin Griffiths hopes to get the Saudi-led coalition and Houthi rebels to the table for a September meeting in Geneva. Two sources familiar with the situation told Al-Monitor that as the Hodeidah operation has shifted to a siege and the UAE threatens to cut the road to the north, families are being displaced.

Saudi officials said they had referred Monday’s report to their legal team, Reuters reports. The Saudi Embassy in Washington did not respond to a request for comment.

Meanwhile, the British government is battling a lawsuit that seeks to ban it from selling weapons to the Saudi war effort. But a former Barack Obama administration official said it’s not clear that the Saudis — or their allies — will face any legal jeopardy for the recent spate of bombings.

“A lot of states don’t incorporate international law into their domestic legal system,” said Scott Anderson, now a governance fellow at the Brookings Institution. “I’m not sure that there’s a direct 1-to-1 of enhanced liability from this report.”

Even if there are no further legal ramifications, the Trump administration faces a September deadline from Congress to certify that the Saudi-led coalition is working to reduce civilian casualties in Yemen.

“There’s a very serious concern that [the Saudis’] congressional engagement isn’t breaking through,” said the former intelligence official. “We’ve explained the problem over and over.”