Pentagon fails to deliver US strategy on Yemen

The Pentagon has missed multiple congressional deadlines to report on US goals for the Saudi-led intervention. 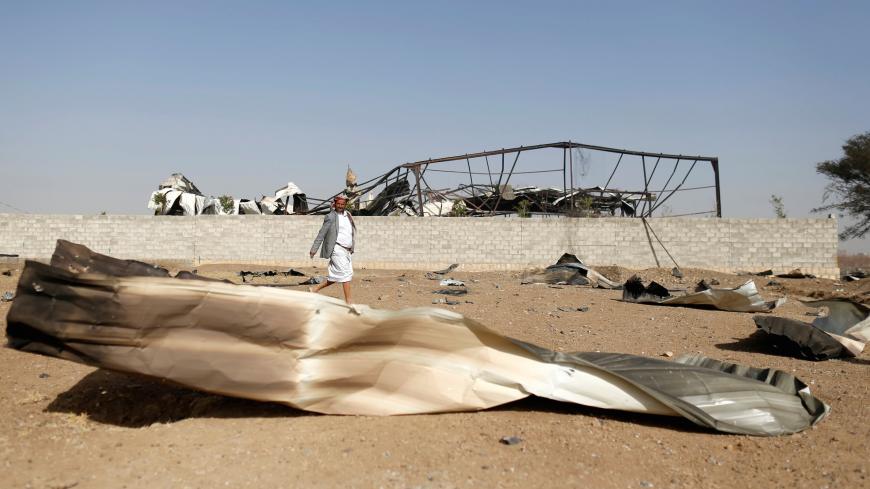 A man walks at the site of an air strike by the Saudi-led coalition in the Houthi-held capital Sanaa, Yemen, Jan. 20, 2019. - REUTERS/Khaled Abdullah

The Donald Trump administration has missed another congressional deadline to lay out the US strategy in Yemen, Al-Monitor has learned.

The US strategy in the four-year conflict has never been publicly articulated even as the Barack Obama and Trump administrations provided refueling and intelligence support. A reporting requirement was set out in last year’s defense authorization bill, which called on the Pentagon to detail specific US diplomatic and national security objectives and the costs of American involvement, including the controversial refueling mission terminated in November.

“The Department of Defense is working with Congress to provide the report," Pentagon spokesperson Rebecca Rebarich told Al-Monitor.

The failure to respond on time is likely to frustrate lawmakers in the wake of another legislative rebuke to US involvement. Last week, the Senate voted to curtail US war powers in Yemen, a move that would cut off American intelligence support to the Saudi-led coalition. After the United States stopped refueling coalition aircraft in November, the Pentagon has focused on providing intelligence support to the Saudi-led coalition and assisting with no-strike lists. A senior Pentagon official had pledged to deliver the strategy report at the beginning of March after failing to meet a Feb. 1 deadline mandated by law.

In recent months, the Trump administration has disregarded several certification requirements from Congress. In February, the State Department refused to say whether the Saudi-led force had reduced civilian casualties in the Yemeni conflict. And the White House failed to respond to lawmakers’ query about whether Saudi Crown Prince Mohammed bin Salman was responsible for the killing of journalist Jamal Khashoggi.

The administration’s failure to check the king-in-waiting’s war in Yemen and Riyadh’s increasingly ambitious foreign policy has led Congress and experts to call for the White House to re-evaluate ties with Saudi Arabia.

“We know who this guy is, we know what he’s capable of, and treating him like he’s an ally or a reliable partner is totally untenable,” said Jeremy Konyndyk, a former US Agency for International Development director during the Obama administration.

In the absence of a formal declaration of strategy, US policy on Yemen remains unclear.

State Department officials — including special representative for Iran Brian Hook — have focused on Iranian support for the Houthis while showcasing weapons seized in Yemen that were allegedly smuggled into the country by Iran. Former Secretary of Defense Jim Mattis instead called for the United States to step up the pressure on Islamist groups and press for the UN-led effort to end the war.

Just days before leaving office in December, Mattis made a whirlwind round of calls to the leaders of Saudi Arabia and the United Arab Emirates to help clinch a cease-fire deal in Stockholm to stave off famine. Since then, the Pentagon has continued to insist that the counterterrorism fight against al-Qaeda and the Islamic State is the top US priority in the conflict.

But the Pentagon’s decision to pass up the strategy deadline also highlights turnover at the highest levels of Middle East policy-making. The Pentagon’s top policy official, John Rood, now in charge of Yemen talks for the department, has spent his career focused on missile defense.

Former US officials told Al-Monitor in January that Mattis’ departure risked a void in US policy on Yemen. And staffing issues across the Defense and State Departments have left experts concerned that there aren’t enough knowledgeable officials left to manage the complex conflict.

“We’re completely handicapped,” said Dave Harden, a former assistant administrator for the US Agency for International Development. “If you have a serious team that’s highly empowered and sufficiently capable, you can shape issues that come in below the [secretary] level that contribute to a positive or negative trajectory."

With the Pentagon barred from resuming refueling to the Saudi-led coalition after failing to provide a report on civilian casualties, experts say US strategy needs to expand beyond the military component.

The US intelligence community’s latest annual Worldwide Threat Assessment released in January determined that neither the Saudi-led coalition nor the Iran-backed Houthis “seems prepared for the kind of compromise needed to end the fighting.” The evaluation suggested that the humanitarian crisis will only get worse in Yemen, where nearly 16 million people already face food insecurity.

“I think Iran views the Yemen conflict much the way that the US viewed the Afghanistan conflict for the Soviets. It’s a way to keep their adversary bogged down and bleeding,” Konyndyk said. “They can keep the Saudis tied up in an unwinnable war that’s doing immense damage to their reputation at a limited cost.”

Meanwhile, the Pentagon still has to convince lawmakers that it will get US taxpayer money back from the terminated refueling mission. Testifying in Congress earlier this month, departing US Central Command chief Gen. Joseph Votel took responsibility for bypassing the Pentagon’s “well-developed protocols and procedures” to recoup $331 million in refueling and flying hour costs. He said he expects the Saudi-led coalition to begin payments later this year.