US Defense Secretary James Mattis defended the Pentagon’s refueling role in Yemen on Tuesday, saying the plan helps the Saudi-led coalition cut down on civilian casualties in the war-torn country. 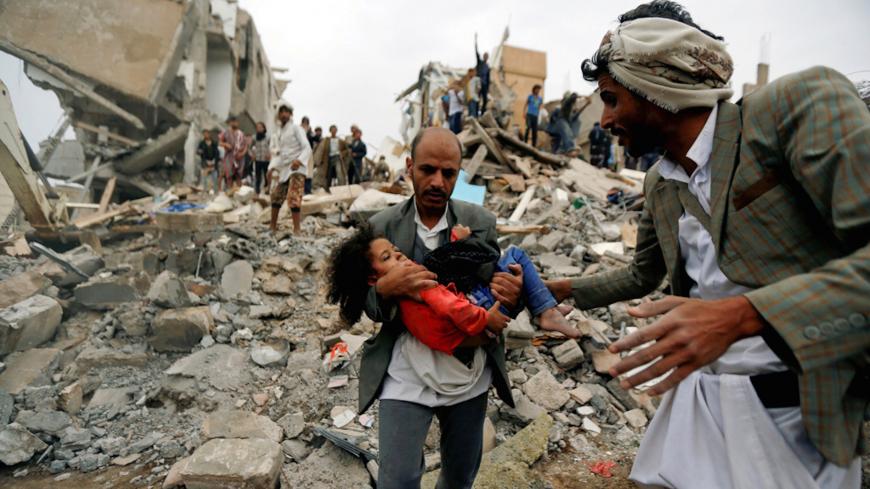 Buthaina Muhammad Mansour, believed to be age 4 or 5, did not yet know that her parents, five siblings and uncle were killed when an airstrike flattened their home in Yemen's capital, Sanaa, on Aug. 25, 2017. She is her family's sole survivor of the attack on an apartment building that residents blamed on a Saudi-led coalition fighting in Yemen since 2015. - REUTERS/Khaled Abdullah

US Defense Secretary James Mattis today said the Pentagon is boosting efforts to cut down on civilian harm in Yemen, even as refueling of Saudi and Emirati jets in the war-torn country continues despite opposition from Congress.

Speaking to reporters at the Defense Department on the heels of a meeting with Saudi Arabia’s Crown Prince Mohammed bin Salman last week, Mattis said a contingent of US advisers deployed to help with intelligence sharing are engaged in a “dynamic” role to help ensure a reduction in civilian harm.

“When we’re doing the planning, we have shown them how you have what we call no-strike zone,” Mattis said, explaining that US forces are helping Saudi and Emirati pilots differentiate between military targets and populated areas such as towns, schools and hospitals. “It’s not as easy as saying there’s a school or hospital, now draw a circle around it on a map. Now it’s got to go up into the airplane, now the people who are calling for strikes have to be aware sometimes you add to them — you found a new place that you didn’t have on the map before.”

“This is the trigonometry level of warfare,” said Mattis. Though the former Marine general and commander of US forces in the Middle East outlined that American air-to-air refueling was aimed at “reducing the risk of civilian casualties” in a letter to Senate Majority leader Mitch McConnell earlier this month, the Pentagon had yet to publicly outline specific procedures to cut down on collateral damage.

During Mohammed’s visit to Washington last week, the Senate defeated a bipartisan effort to end US refueling and intelligence support for the Yemen war in a 55-44 vote, after a dedicated Mattis and the chairman of the Joint Chiefs of Staff, Marine Gen. Joseph Dunford, extensively lobbied lawmakers to vote to scuttle the measure.

The United States is not part of Saudi Arabia’s targeting process in Yemen, but it trains Arab air forces on the same procedures to develop no-strike lists and on how to properly employ guided munitions that American pilots use against suspected Islamic State targets in Iraq and Syria.

The Defense Intelligence Agency, the Pentagon’s in-house intelligence wing, typically holds strike lists to help the US Air Force distinguish between military and civilian targets. American adversaries dating to the Iraq War are known to disguise weapons caches in “dual-use” buildings such as schools and mosques to confuse US pilots.

Mattis said, “When you’re a pilot in the air and you’ve got bombs on your wing and you’ve got somebody calling on you to drop and you’re watching your fuel gauge go,” US refueling provides pilots reassurance that “there’s no need for a rash or hasty decision there.”

The Pentagon has boosted the number of troops designated to investigate open-source civilian-casualty reports in the past several months in Iraq and Syria, from two to three to roughly seven, Air Force Col. John Thomas, a US Central Command spokesman, said at a media briefing in October.

Yet rights groups say it’s not clear the refueling effort, which cost taxpayers more than $1 million over the past fiscal year, has had a measurable impact in reducing civilian harm. The Saudi-led coalition has conducted 16,749 airstrikes since March 2015, according to the Yemen Data Project.

The United Nations Panel of Experts in Yemen said that 10 air attacks in 2017 killed 157 Yemenis, and the UN has stated that the Saudi-led air war has killed 5,000 civilians, a majority of the noncombatant death toll.

Meanwhile, as Secretary of State-designate Mike Pompeo prepares for confirmation hearings before the Senate Foreign Relations Committee next month, Saudi Arabia faces a looming threat from Iranian-made variants of Scud missiles making their way into Yemen to support the Houthi rebel group.

A projectile fired Sunday toward Riyadh’s airport resulted in the death of an Egyptian worker, leading experts to fear that a UN-backed negotiation supported by Mattis remains far from resolving the conflict.

“The Saudi war aims of minimizing Iranian influence, protecting Saudi territory and restoring the [Abed Rabbo Mansour] Hadi government seem as far or further away than they were at the start of the air campaign,” said Dave Des Roches, a former White House and Pentagon official now with the National Defense University, in an op-ed for the Arab Gulf States Institute. “Missile intercepts over Riyadh should not be normal; the most effective counter to missiles fired on Saudi Arabia is a settlement to the Yemen war.”