The United States sold Saudi Arabia and the United Arab Emirates more than $650 million in weapons last year for their war against the Houthis, according to a new report. 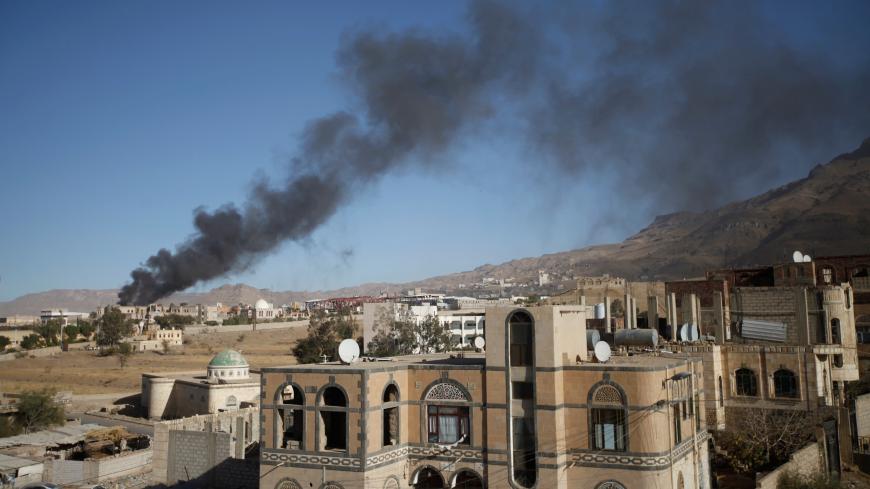 Smoke rises after an airstrike on a military site in Sanaa, Yemen, Jan. 11, 2018. - REUTERS/Mohamed al-Sayaghi

The United States sold more than $650 million in weapons to Saudi Arabia and the United Arab Emirates as the Yemen war expanded last year, according to a study released Thursday.

The Washington-based Security Assistance Monitor said the weapons went to Saudi Arabia and the UAE through the State Department’s Direct Commercial Sales program, which allows American arms-makers to sell directly to foreign customers.

US weapons contractors reportedly sold $610 million in precision-guided bombs and small arms ammunition to the Saudis, and another $48.6 million in M-4 and M-16 automatic rifles and spare parts to the Emiratis. Congress receives detailed readouts of direct US commercial weapons sales, but only cursory data is made public.

Under the program, the UAE spent nearly $60 million for small arms in 2016, while Saudi Arabia purchased about $11 million worth of machine guns.

Experts say the move shows an uptick of expeditionary warfare by the UAE.

“It reflects the high op tempo of the UAE armed forces,” David Des Roches, a former Defense Department and White House official told Al-Monitor. “If you go back, they bought their original rifles in 2000 — they probably need to recapitalize them.”

The standard-use weapons for US soldiers and Marines could go to the UAE’s 4,000 troops in Yemen in its ground war against Iran-backed Houthi rebels, including the elite Presidential Guard.

The United States has also provided significant supplies of guided munitions to boost the Saudi-led air war in Yemen, delivering 4,000 joint direct attack munitions that can be latched onto “dumb bombs” for accurate targeting to Saudi Arabia in 2017. Another 1,000 of the smart bomb kits were delivered to the UAE the year before.

Yet the weapons are being unleashed on battlefield that’s increasingly unpredictable. In 2015, The Washington Post reported that the Pentagon could not account for more than $500 million worth of weapons given to the embattled government of President Abed Rabbo Mansour Hadi, and suspended assistance. Apparently US-supplied sensor turrets also appeared in Houthi propaganda footage earlier this year that showed the Iran-linked militant group shooting down a Saudi F-15. And in February, local groups allied with Saudi Arabia turned on each other, dimming Riyadh’s hopes for a settlement.

Meanwhile, the US Central Command also quadrupled airstrikes in Yemen to more than 120 in 2017, primarily targeting al-Qaeda in the Arabian Peninsula.

But as the Donald Trump administration has waved aside Barack Obama-era human rights protections to sell the precision weapons to Riyadh, international observers and rights groups have complained that the deliveries are being used against civilians.

Amid a worsening humanitarian situation in the country, the Trump administration demanded that Saudi Arabia receive $750 million in US training to mitigate civilian casualties in Yemen. Under US pressure, Riyadh also allowed four US-made cranes into Hodeidah port in January to help unload humanitarian assistance, after closing all of Yemen’s ports, airports and land crossings in November.

Yet according to a United Nations report released in January, inspectors who investigated 10 Saudi-led airstrikes that led to 157 deaths and 135 injuries found that Riyadh’s efforts to mitigate harm to children “remain largely ineffective.” The weapons used in the attacks included US- and UK-provided Paveway bomb guidance kits.

The UN has also accused UAE forces of detaining more than 200 Yemenis who were tortured and denied timely medical treatment.

Last month, Lt. Gen. Jeffrey Harrigian, head of the US Air Forces Central Command, told Al-Monitor that the United States continues to refuel Saudi and Emirati jets leading the bombing campaign in Yemen while providing targeting and other advice. Over the past year, the Defense Department has provided 478,750 gallons of aviation fuel to the Saudi coalition at a cost of more than $1 million, more than doubling its support over the previous fiscal year.

But as Saudi Crown Prince Mohammed bin Salman prepares to visit Washington on March 19, lawmakers are expressing increased frustration with Riyadh’s air war. Last week, Sen. Bernie Sanders, I-Vt., a former Democratic presidential contender, added his name to a bipartisan resolution that would end US support for the campaign.

Last year, Sens. Chris Murphy, D-Conn., and Rand Paul, R-Ky., pushed for a vote to block a $500 million sale of precision-guided missiles for use against the Houthis.

“What makes it a little bit tricky is that it’s not just a strict security assistance question,” said Des Roches, now with the National Defense University. “It’s a question of Congress in terms of a declaration of war.”