The State Department request for a bombs resupply has hit a snag amid a rising death toll. 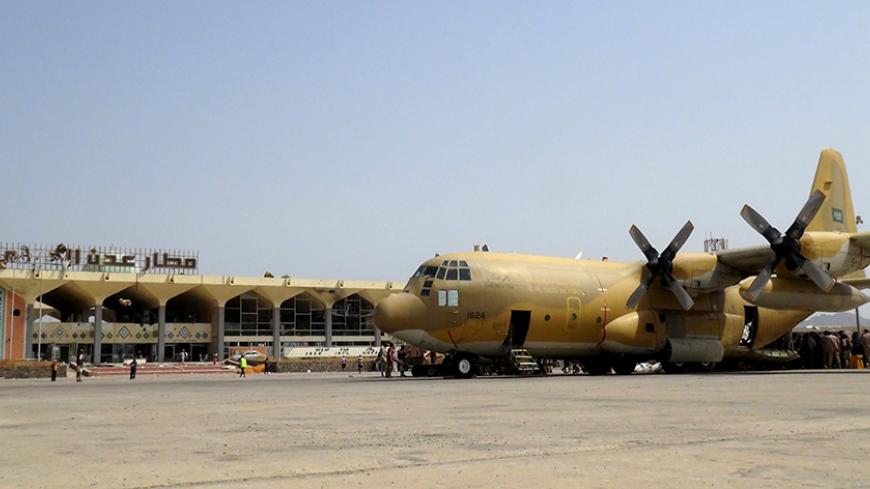 A Saudi military cargo plane, loaded with arms for fighters loyal to Yemen's deposed president, is seen at the international airport of Yemen's southern port city of Aden, July 22, 2015. - REUTERS

Democrats on a key Senate panel are holding up bomb sales for the Saudi air campaign in Yemen amid growing concerns over the rising death toll, Al-Monitor has learned.

Congress was notified Aug. 19 of the Obama administration's intent to provide Riyadh with thousands of precision-guided munitions. The sale is linked to the administration's effort to placate Gulf countries' concerns about the Iranian nuclear deal, but it has hit a snag with Democrats on the Senate Foreign Relations Committee who want to see the Saudi-led campaign reeled in.

“What we are concerned about is that there is not a military solution in Yemen,” Sen. Ben Cardin, D-Md., the top Democrat on the panel, told Al-Monitor. “What we want to do is get the parties serious about implementing a political solution. We thought we had a clear track to that, and it's off track right now. So we want to get it back on track.”

Cardin described the delay as a fairly routine matter of lawmakers and staff pressing the administration for answers and reassurances. He and others made it clear, however, that senators on the panel, particularly Democrats, have a wide array of concerns they want to see addressed.

“This proposal is receiving a considerable level of congressional scrutiny,” one Senate Democratic aide acknowledged.

A coalition of human rights and arms control groups has been working behind the scenes for weeks to try to get lawmakers to speak up against the Saudi-led air campaign in Yemen, which has been blamed for the deaths of more than 2,300 civilians over the past six months. Their message emerged in public Oct. 6 during a Senate Foreign Relations Committee hearing on Yemen that saw several Democrats question the wisdom of rearming the Saudis.

“I fear that our failure to strongly advocate diplomacy in Yemen over the past two years, coupled with our failure to urge restraint in the face of the crisis last spring, may put the viability of this critical [US-Saudi] partnership at risk,” said Sen. Ed Markey, D-Mass. “The Leahy Law prohibits US security assistance — and many forms of defense cooperation — with forces that have engaged in gross violations of human rights. If reports are accurate, the Saudi indiscriminate targeting in the air campaign and an overly broad naval blockade could well constitute such violations.”

The Saudi Embassy in Washington did not respond to a request for comment. Riyadh has repeatedly said that it is fighting in Yemen at the behest of the internationally recognized government against Iran-backed Houthi rebels, although a number of experts say the Saudis are overstating Tehran's influence for their own purposes.

“It is not clear to me that the Houthi insurgency comes with a made‐in‐Iran label,” testified former US Ambassador to Yemen Stephen Seche at the hearing. “While I don't doubt that Iran has provided political, financial and military support to the Houthis, we must remember that they are a 100% Yemeni phenomenon.”

Seche told Markey that neither the Houthis nor the Saudi-backed government was “ready to make concessions needed to get to a negotiated settlement.” US leaders “need to speak more publicly,” said Seche. “​There's an important, critical juncture we've reached here where the outcome is going to be more human suffering if we do not find a way to bring the parties to the table.”

Sale opponents told Al-Monitor that they'd like to see lawmakers introduce a resolution of disapproval against the sale or at least circulate a Dear Colleague letter. While the sale is almost certain to go through eventually, they hope to use it as leverage to win concessions on kick-starting political negotiations with the Houthis and lifting the blockade.

“Providing additional arms to Saudi Arabia would effectively give a green light to an ongoing military campaign that continues to cause immense suffering in Yemen,” said Scott Paul, senior humanitarian policy adviser for Oxfam America. “More than six months after airstrikes began, the Saudi-led coalition has not demonstrated a willingness to agree to engage meaningfully in a political process. With more than four out of every five Yemenis in need of some kind of aid to survive, the US must make crystal clear its desire to see an immediate cease-fire. Selling weapons to Saudi Arabia totally undermines that message.”

Critics of the sale in particular point out that Riyadh has been able to derive extra legitimacy from the US support for its campaign.

“We are very careful in picking targets. We have very precise weapons,” Saudi Foreign Minister Adel al-Jubeir told CBS News after an airstrike killed more than 130 people at a wedding reception. “We work with our allies, including the United States, on these targets.”

Committee Chairman Bob Corker, R-Tenn., declined to discuss the conversations taking place inside the committee. He did appear, however, to support the sale going through, pointing out that precision-guided munitions could lead to fewer deaths than Saudi reliance on so-called dumb bombs, echoing an argument State Department officials have also been making.

Corker did acknowledge the responsibility that comes with weapons sales. “That's why having a more strategic relationship with them would be important,” he said, “versus us just having a mercantile relationship where we're selling them a lot of arms.”

A number of committee Democrats echoed those sentiments.

“I am generally supportive of the Gulf states taking responsibility for the security of the region,”​ said Sen. Chris Murphy, D-Conn., the top Democrat on the committee's Near East panel. “But that doesn't mean we should write blank checks to our allies in the region when it comes to our support for their military operations.

“I'm not sure the Saudis and the Emiratis in particular have thought through steps three, four and five after launching airstrikes and moving ground troops into Aden. So I think it's perfectly appropriate for us to ask some questions about what their plans and strategy are moving forward as a predicate to another massive transfer of weapons and technology.”

Others had different concerns.

“I want to know what the plan is,” said Sen. Tim Kaine, D-Va. “It's not all bad that the Saudis decided that they wanted to act immediately in Yemen. I don't think we need to be 'mother may I' in terms of folks acting in their own security interests in the region. But I am struck by the level of their response compared to what I view as an extremely tepid response to Sunni extremism. It's not just Iranian influence in the region that should trouble us.”