US support for Saudi war in Yemen soars under Trump

The Defense Department more than doubled US refueling support for Saudi Arabia’s campaign against the Iran-backed Houthis in Yemen over the past year amid rising congressional opposition. 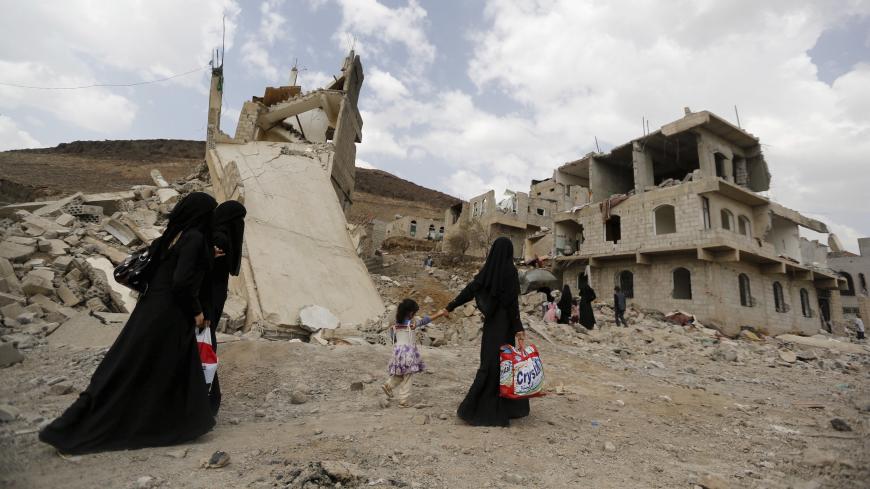 Women walk past a collapsed roof of a building destroyed by a Saudi-led airstrike in Yemen's capital Sanaa, Sept. 7, 2015. - REUTERS/Khaled Abdullah

The Pentagon more than doubled US refueling support for the Saudi-led mission in Yemen over the past year, a spokeswoman told Al-Monitor, despite mounting public and congressional concerns about the operation.

Amid a worsening humanitarian crisis in the war-torn country, the US Department of Defense provided about 480,000 gallons of aviation fuel to the mission at a cost of more than $1 million in the fiscal year that ended Sept. 30, a 140% increase over the previous year. The disclosure comes as Yemen suffers the world’s worst cholera epidemic and the Saudis face international pressure to lift their blockade of the country’s ports.

“This revelation should be a wake-up call to every policymaker and every American that this country is literally fueling the largest humanitarian crisis in the world and the worst cholera outbreak in recorded history,” said Kate Gould, a lobbyist with the Friends Committee on National Legislation, a Quaker group. “The [United States] is operating these gas stations in the sky to fuel Saudi and UAE bombers as they rain down terror on Yemeni water and other sanitation infrastructure — the last safeguards Yemen has against these disease outbreaks sweeping the country.”

Though top Pentagon officials say that the United States no longer assists the Saudi-led coalition with targeting Iran-backed Houthi rebels in Yemen, the refueling mission has continued to expand under President Donald Trump. The Pentagon buys its fuel from the Defense Logistics Agency, an in-house organization that provides supplies to the US military and then sells it to individual military services, including the US Air Force, which is spearheading the refueling mission. The United States has conducted 2,363 refueling sorties in the Horn of Africa since the Saudi-led campaign began in March 2015, but US Central Command, which tracks that data, does not break out figures by country. 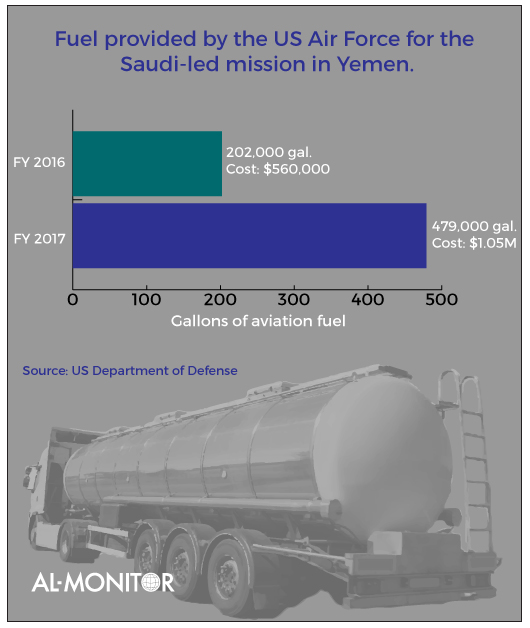 Lawmakers opposed to US support for the operation were quick to criticize the refueling figures. The House of Representatives on Monday adopted a nonbinding resolution that is highly critical of Iran and the Houthis but also notes that “Congress has not enacted specific legislation authorizing the use of military force against parties participating in the Yemeni civil war.”

“The House resolution passed Monday makes it clear that the United States is unauthorized in providing the Saudis with any support in their war against the Houthis,” the resolution’s sponsor, Rep. Ro Khanna, D-Calif., argued in a statement to Al-Monitor. Khanna said he hopes the Pentagon will “cease any refueling activity for operations against the Houthis.”

“Their actions must be limited to counterterrorism operations against al-Qaeda,” he said, “and there must be full transparency.”

“It's absurd that it [has] taken almost 2½ years to receive honest answers,” said Kate Kizer, director of the Yemen Peace Project.

The new data, Kizer says, “speaks to an even greater urgency for Congress to end this unauthorized military support for the coalition that has largely created the world's worst humanitarian crisis.”

The UN says more than 10,000 Yemenis have died since the start of the war. The Saudi coalition has come under particular criticism for bombing civilian infrastructure and blockading Yemeni ports, a move Saudi Arabia took in retaliation for a failed Houthi ballistic missile strike against Riyadh earlier this month.

Backed by Gulf allies, Riyadh first intervened more than two years ago to restore the UN-backed government of President Abed Rabbo Mansour Hadi. Since then, the United States has provided the Saudi coalition with targeting assistance, aircraft refueling and intelligence, though Washington has scaled back some of that support recently.

Speaking at the Dubai Air Show last week, Lt. Gen. Jeffrey Harrigian, the top US Air Force commander in the Middle East, said that the Pentagon had stopped providing targeting assistance to Saudi-led forces in the conflict, but that US advisers in the border region continued to support operations. US forces regularly target al-Qaeda and Islamic State militants throughout the war-torn country.

The United States also supports the operation through weapons sales to Saudi Arabia and its partner the UAE, with the State Department approving more than $3 billion in bomb sales to both countries since March 2015. The US Senate narrowly approved a $500 million sale of precision-guided munitions to the Saudis in June in a sign of increasing congressional frustration.

Even as it continues to support the Saudi coalition, the United States remains the largest humanitarian aid donor to Yemen, providing $467 million in the fiscal year that just ended.