House leadership has watered down a resolution addressing US support for the Saudi-led campaign against the Houthis. 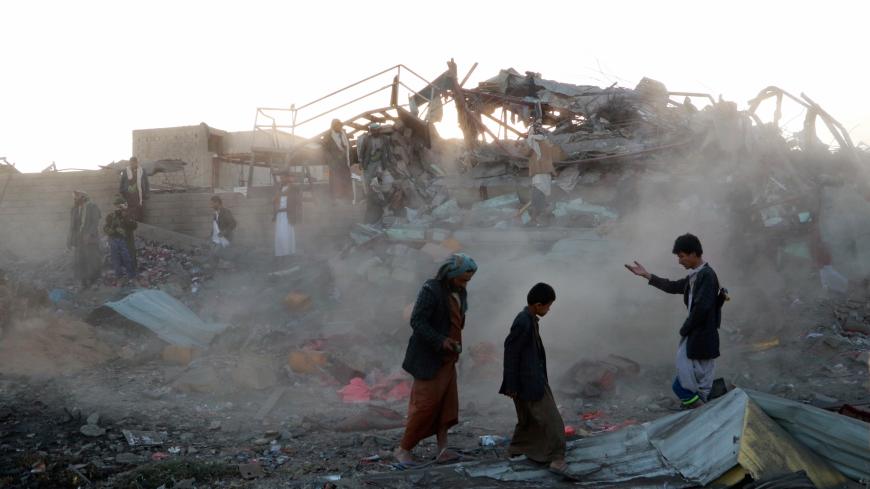 People walk at the site of an airstrike in the northwestern city of Saada, Yemen, Nov. 1, 2017. - REUTERS/Naif Rahma

House leaders have neutered a bipartisan push to suspend US military support for Saudi Arabia’s campaign against the Iran-backed Houthis in Yemen.

Rep. Ro Khanna, D-Calif., had planned to offer a resolution this week requiring President Donald Trump to cease US military involvement in Yemen except for “forces engaged in operations directed at al-Qaeda in the Arabian Peninsula or associated forces.” A new resolution introduced Wednesday and obtained by Al-Monitor, however, eliminates that clause amid pressure from House leaders opposed to the motion.

In addition to eliminating the “removal of armed forces” clause, the new resolution calls on “all responsible countries to take appropriate and necessary measures against the government of Iran, including the interdiction of Iranian weapons to the Houthis.” It also urges an end to the obstruction of humanitarian aid while supporting “the Saudi-led Arab coalition’s commitments to abide by their no-strike list and restricted target list and improve targeting capabilities.”

Khanna told Al-Monitor that he believes that House leadership “negotiated in good faith” on the compromise resolution. The full House is expected to debate and vote on his new resolution later this month.

Peace activists, however, are furious at the missed opportunity to end US support for the Saudi coalition, which has been accused of indiscriminately bombing civilian targets. They argue that eliminating the clause calling for the “removal of armed forces” and the addition of other clauses has rendered the new resolution toothless.

“This is an effort likely to succeed because most of both the Democrats and Republicans are warmongers when it comes to [aiding] Saudi Arabia,” said retired Col. Lawrence Wilkerson, the former chief of staff to former Secretary of State Colin Powell and a vocal critic of the war in Yemen. “The substitute language … makes it look as if the signers are concerned about the humanitarian disaster … [and] concerned about the threat from Iran, commingling that threat nicely, but inaccurately, with al-Qaeda.”

Riyadh and its allies intervened in March 2015 to restore the UN-backed government of President Abed Rabbo Mansour Hadi. Since then, the United States has provided the Saudi coalition with targeting assistance, aircraft refueling and intelligence. Additionally, US forces regularly target al-Qaeda and Islamic State (IS) militants throughout the war-torn country.

However, Hoyer spokeswoman Katie Grant told Al-Monitor, “He never dissuaded anyone from co-sponsoring the original resolution.” She added that Hoyer “supports the new resolution.”

The original resolution was predominantly a liberal endeavor endorsed by the Congressional Progressive Caucus. It also garnered support from a small handful of noninterventionist Republicans.

“In Yemen, I don’t have a great deal of respect for Saudi Arabia,” Rep. Walter Jones, R-N.C., one of the original resolution’s initial co-sponsors, told Al-Monitor.

Jones also criticized House leaders’ decision not to put the original resolution on the floor.

“I’ve been very disappointed,” said Jones. “[House leadership] has got their own agenda and that’s what gets on the floor.”

Lawmakers opposed to US support for Saudi Arabia’s Yemen campaign have another chance to exert pressure on the Trump administration as House and Senate conferees negotiate a compromise annual defense authorization.

In July, the House passed an amendment from Rep. Warren Davidson, R-Ohio, onto its version of the annual defense bill; the amendment would prohibit the administration from using funds for military activities in Yemen that don’t fall under the purview of the 2001 military authorization. The administration uses that legislation as legal justification for counterterrorism operations. The Senate bill does not include such language.