Recent revelations that US ground troops are helping Saudi-led coalition forces target Houthi missile stockpiles in Yemen have renewed calls on Capitol Hill for more congressional oversight in the war. 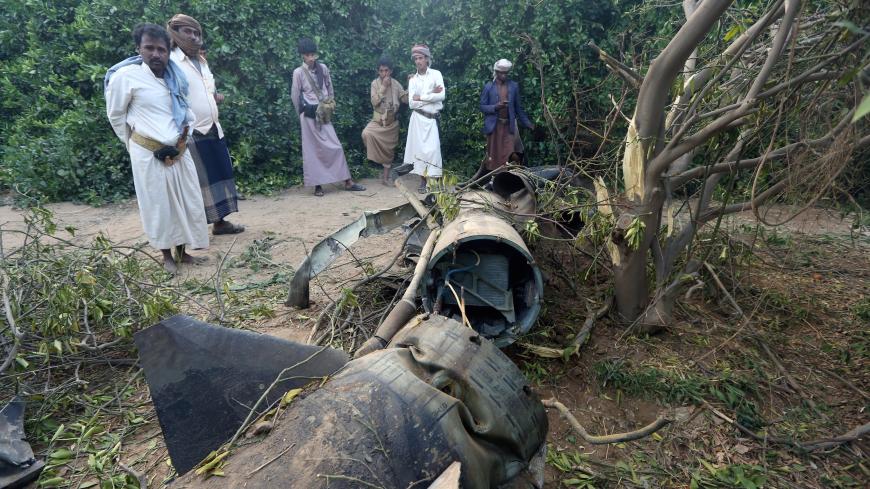 Tribesmen inspect fragments of a Houthi ballistic missile at a farm after it was intercepted by the Saudi-led coalition's air defense forces in Marib, Yemen, Feb. 23, 2018.

Congressional critics of US involvement in the war in Yemen are up in arms following a recent report in The New York Times revealing that the Donald Trump administration has stationed a dozen US Army Green Berets on the Saudi border as part of the fight against Iran-backed Houthi rebels.

The Trump administration maintains that US support for the Saudi-led coalition is limited to targeting, logistics, intelligence and midair refueling support for coalition warplanes. But in recent months the US role in the war has fallen under heightened scrutiny from lawmakers as coalition bombings result in mounting civilian casualties and the country struggles with famine and the worst cholera outbreak in history.

“The Trump administration’s purposeful blurring of lines between train-and-equip missions and combat, from Niger to Yemen, is unacceptable,” Sen. Tim Kaine, D-Va., told Al-Monitor in a statement. “It runs afoul of our system of checks and balances in war powers and is deepening our involvement in endless wars without a vote of Congress.”

“I have strong concerns that the Trump administration is getting the US more involved in a war in Yemen without congressional authorization,” Sanders tweeted today, following the Times report. “I’ll be seeking further clarification on these activities. We must prevent the US from getting dragged into another never-ending war.”

The failed Sanders-Lee resolution also prompted Sens. Todd Young, R-Ind., and Jeanne Shaheen, D-N.H., to introduce new legislation that would require Saudi Arabia to meet a series of stringent diplomatic and human rights criteria in order to continue qualifying for US refueling support. US refueling operations are essential for the coalition in carrying out its aerial campaign.

Also taking to Twitter, Khanna today argued that the ground troops go “beyond just refueling Saudi-led coalition jets and targeting-assistance. Our troops continue to see their involvement increase in the Saudi-led war against the Houthis. This is an unconstitutional and unauthorized use of military force.”

However, critics of Iran’s support for the Houthi rebels against Yemen’s internationally recognized government are quick to defend US support for the coalition as a deterrent against a constant barrage of missiles that have targeted Saudi cities and airports in recent months. According to the Times, the handful of US troops at the border are training Saudi troops and using surveillance planes to track Houthi weapons and launch sites.

"While Yemen is awash with Russian and Chinese weaponry, Iran has been a force multiplier for Houthi missile capabilities,” Behnam Ben Taleblu, a research fellow at the hawkish Foundation for Defense of Democracies, told Al-Monitor. “One hopes that the Green Berets will be able to not only help the Saudis identify launch sites and material depots, but the launchers that enable the Houthi missile force to become mobile.”

He added, “A known unknown in the open source community is the exact location which Yemen is using to fire missiles into the kingdom.”

A United Nations report earlier this year found that Tehran was in violation of an arms embargo on Yemen because the Houthis have obtained Iranian missiles.

But opponents of US anti-Houthi operations in Yemen contend that The New York Times revelations indicate that the Trump administration was less than forthcoming in the debate leading up to the Senate's tabling of the Sanders-Lee joint resolution in March.

“The bigger question here is the credibility of the arguments the Pentagon made during the debate and how forthcoming they’re being with members who are trying to do oversight and weigh in on this,” Stephen Miles, the director of Win Without War, a coalition of anti-war groups, told Al-Monitor.

The Pentagon did not respond to Al-Monitor’s inquiry as to whether they had informed lawmakers of the Green Berets stationed at the border. During the debate, the Department of Defense maintained that US support for the Saudi coalition does not constitute involvement in “hostilities.”

“The administration’s claim that US military support to Saudi Arabia — which has included aircraft, weapons, training, intelligence and refueling — does not constitute involvement in ‘hostilities’ is absurd,” Kaine told Al-Monitor. “This is yet another example of why we urgently need a debate and vote on the blank check that’s been given to the president to wage wars.”

Miles also contended that the ground troop deployment constitutes “hostilities,” regardless of which side of the border they’re stationed on, since they’re providing targeting assistance against targets in Yemen. He noted, “It’s unclear … whether or not those Green Berets have gone into Yemen on a mission.”