The Senate voted on US support for the Saudi-led war against the Houthis for the first time since the war began three years ago. 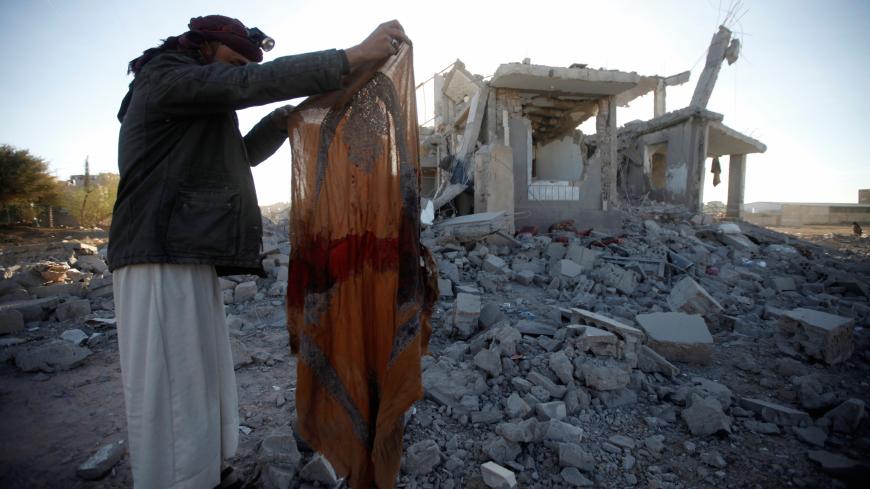 A Houthi militant holds a blood-stained garment at the site of a Saudi-led airstrike, north of Yemen's capital, Sanaa, March 8, 2018. - REUTERS/Mohamed al-Sayaghi

Congress held a heated debate on how to confront Iran in the Donald Trump era today as the Senate held its first debate and vote on US participation in the Saudi-led intervention against the Houthis in Yemen.

By a vote of 55-44, the Senate voted to kill a bipartisan effort to end US support for an aerial campaign that has killed thousands of civilians over the past three years. While proponents of the measure decried the humanitarian toll and lack of congressional oversight, the specter of Iran loomed over the debate.

“The Trump administration has tried to justify our involvement in the Yemen war as necessary to push back on Iran,” bill sponsor Bernie Sanders, I-Vt., said ahead of the vote. “While Iran’s support for Houthi insurgents is of serious concern for all of us, the truth is that this war has increased, not decreased, the opportunities for Iranian interference.”

“As it has done in political vacuums throughout the region, Iran will continue to expand its proxy power,” said Sen. Robert Menendez, D-N.J., the top Democrat on the Senate Foreign Relations Committee. “Through its Revolutionary Guard, Iran will continue shipping weapons to the Houthis.”

US support for the Saudi-led campaign in the form of midair refueling, targeting assistance and intelligence began under the Barack Obama administration. But today’s narrow vote signals growing concern among noninterventionist lawmakers in both parties, even as Trump signals an increasingly hawkish posture toward Iran.

“The longer we fight against [the Houthis], the more reason we give them to fight America and embrace the opponents who are our true enemy in the region, Iran,” said Sen. Mike Lee, R-Utah, who joined Sanders in introducing the bill last month. “We’re spending a great deal of time and treasure to defeat a regional rebel group with no desire to attack the homeland and unclear ties to Iran.”

Congressional leaders — including Menendez, Majority Leader Mitch McConnell, R-Ky., and Senate Foreign Relations Chairman Bob Corker, R-Tenn. — joined forces to defeat the Sanders bill. Instead, Corker promised to have administration officials publicly testify before the committee about the US strategy in Yemen.

The timing of today’s vote was particularly awkward, coming just as Saudi Crown Prince Mohammed bin Salman was making the rounds on Capitol Hill to cement the US-Saudi alliance against a shared foe. Corker said he “strongly, strongly pushed back” in his meeting with the crown prince and asked him to “take strong, corrective actions” to limit civilian casualties.

Deputy Secretary of State John Sullivan joined officials from the Department of Defense to brief senators on Yemen in a classified setting last week. The Trump administration opposed the Sanders-Lee bill, arguing that midair refueling services and intelligence support do not qualify as “hostilities” requiring congressional action.

Corker committed to working with the administration to advance an alternative bill in April.

He floated a bill sponsored by Sen. Todd Young, R-Ind., and Sen. Jeanne Shaheen, D-N.H, that would make US support for the Saudi campaign in Yemen contingent on “an urgent and good faith effort to conduct diplomatic negotiations to end the civil war in Yemen” and “appropriate measures to alleviate the humanitarian crisis in Yemen by increasing access for all Yemenis to food, fuel and medicine.” The US military, however, would still have free rein to counter “Iranian terrorist activities” and “the transport, assembly or employment of Iranian ballistic missiles or components in Yemen.”

Riyadh has vigorously pushed back against efforts to end US support for its campaign by painting the Houthis as a direct Iranian proxy group akin to Lebanon’s Hezbollah. The Saudis point to Iran’s arms smuggling to the Houthis via Oman and the Houthis’ missile attacks on Saudi territory, which began after Riyadh launched its campaign in 2015.

“The Iranian ideology penetrated some parts of Yemen,” Prince Mohammed said in a CBS interview last week. “During that time, this militia was conducting military maneuvers right next to our borders and positioning missiles at our borders.”

The Saudi Embassy, for its part, distributed an extensive list of talking points to lawmakers emphasizing the threat the Houthis pose to Saudi Arabia as well as US ships in the Bab el-Mandeb strait. Opponents of the Sanders resolution made many of those same arguments.

While Menendez bemoaned the Saudi-led coalition’s “unacceptable scale of civilian casualties, the severity of the humanitarian crisis and the seeming lack of momentum on all sides toward a political track to negotiate an end to this conflict,” he ultimately faulted the Houthis for instigating the conflict by overthrowing the UN-recognized government of President Abed Rabbo Mansour Hadi. Menendez also asserted that “other nations in the region will be left questioning the commitment” of the United States, a key Saudi talking point.

The rhetoric on Yemen comes as Riyadh is encouraging Trump’s apparent escalation with Iran. On Monday, Saudi Foreign Minister Adel al-Jubeir referred to the Obama-era nuclear deal, which Riyadh had previously grudgingly supported, as “a flawed agreement.”

Trump has threatened to pull out of the nuclear deal unless Congress and European signatories to the 2015 accord agree to address what he views as the deal’s flaws by May 12. The president’s appointment of CIA Director Mike Pompeo, an Iran hard-liner, to replace Rex Tillerson as secretary of state has further worried opponents of the deal.

Lee said that if the Yemen bill were to pass, “There may be some short-term impact on the US-Saudi relationship.”

“But overall,” he said, “the crown prince should understand that this protracted and clearly nonconclusive war only hurts his government’s stability and legitimacy.”