In an unprecedented move, the Senate has cleared a key procedural hurdle that paves the way to end US support for the Saudi-led coalition’s intervention in Yemen. 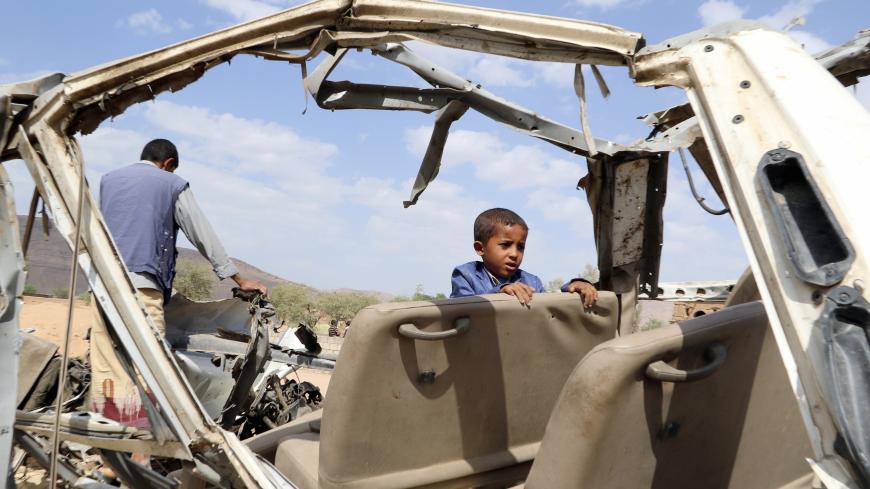 Hafidh Abdullah al-Khawlani, who survived a Saudi-led airstrike, stands with his father on the wreckage of a bus destroyed by the strike in Saada, Yemen, Sept. 4, 2018. - REUTERS/Naif Rahma

Congress held a rare vote to curtail US military involvement in Yemen today in a direct, bipartisan rebuke of the Trump administration’s refusal to crack down on Saudi Arabia.

Clearing a key procedural hurdle, the Senate voted 63-37 to move ahead with legislation directing President Donald Trump to end US support for the Saudi-led coalition against Yemen’s Iran-backed Houthi rebels. Today’s vote marks the first time the Senate has used the 1973 War Powers Act to direct a president to end a foreign military intervention.

“It is imperative today that the United States Senate tells Saudi Arabia and tells the world that we are not going to be continuing to be part of that humanitarian catastrophe,” Sen. Bernie Sanders, I-Vt., the resolution’s sponsor, told reporters ahead of the vote. “We are ending our participation in that horrific war and we are going to do everything that we can to force the Saudis and the Houthis to the peace table and to provide the desperately needed humanitarian aid that the Yemenis want.”

Sanders had tried to secure the same vote in March, but unlike today, it failed to clear the necessary procedural hurdle 55-44.

The Trump administration had hoped to again forestall such a vote by dispatching Secretary of State Mike Pompeo and Defense Secretary James Mattis to brief senators today on Saudi Arabia’s campaign in Yemen as well as its murder of journalist Jamal Khashoggi in the Saudi Consulate in Istanbul. But the classified briefing backfired, prompting several senators from both parties who had previously opposed moving forward with the Sanders resolution to switch their votes in an unprecedented rebuke of the embattled US ally.

“The briefing today with Secretaries Pompeo and Mattis, though appreciated, raised more questions than it answered,” said Sen. Todd Young, R-Ind., who voted to move forward with the debate despite his previous opposition to the resolution.

“I will take a back seat to no one as an Iran hawk,” added Young. “Famine and the indiscriminate targeting of civilians will only push more Yemenis towards Iran and its proxies.”

The absence from the briefing of CIA Director Gina Haspel, one of the few US officials believed to have listened to Turkey’s recording of Khashoggi’s murder, only compounded lawmakers’ ire.

“Like most in the room, I was disappointed that Gina Haspel was not there,” Senate Foreign Relations Committee Chairman Bob Corker, R-Tenn., told reporters after the briefing. He went on to refer to the briefing as “highly unsatisfactory” and called the administration’s response “not valid.”

Both The New York Times and The Washington Post have reported that the CIA has concluded that Saudi Crown Prince Mohammed bin Salman ordered Khashoggi’s assassination. But Pompeo, like Trump, has rebutted those reports, shielding the crown prince from scrutiny.

“There is no direct reporting connecting the crown prince to the order to murder Jamal Khashoggi,” Pompeo said after today’s briefing.

“We have a crown prince who’s out of control,” said Corker. “The blockade in Qatar, the arrest of a prime minister of Lebanon, the killing of a journalist. And whether there’s a smoking gun, I don’t think there’s anybody in the room who doesn’t believe he was responsible for it.”

The Tennessee Republican opposed Sanders’ first attempt to force a vote on the Yemen war, but ultimately voted to proceed with the resolution today to send the Trump administration a message. He noted that the Sanders resolution “can be amended to figure out some way for us to send the appropriate message to Saudi Arabia to appropriately display American values and American action.”

Sens. Mike Lee, R-Utah, and Chris Murphy, D-Conn., co-sponsors on the Yemen resolution, both said they would be open to Republican amendments to secure final passage after today’s procedural vote.

“The October murder of Saudi national Jamal Khashoggi has heightened the Capitol Hill caterwauling and media pile-on,” Pompeo wrote Tuesday. “But degrading US-Saudi ties would be a grave mistake for the national security of the US and its allies.”

Pompeo and Mattis also reject the legal standing on which the Sanders resolution rests, arguing that US support for the Saudi coalition does not fall within the purview of the War Powers Act.

“The US is not operationally involved in hostilities in Yemen’s civil war or in situations where the threat of hostilities is imminent,” Mattis asserted in his opening remarks to lawmakers.

Sanders and other lawmakers, however, maintain that targeting assistance, logistical support, the deployment of US troops on the Saudi-Yemeni border and the midair refueling for Saudi coalition warplanes all qualify as “hostilities.”

And while the Trump administration ended the refueling support for coalition planes earlier this month, Yahoo News recently reported that the Defense Department is conducting a classified operation to assist the Saudis against the Houthis in Yemen, which may involve US ground troops.

Even if the Senate ultimately passes the Yemen resolution — amended or otherwise — Republican leadership in the House has refused to allow a floor vote in the lower chamber. However, Democratic leaders have signed onto the resolution, meaning that it could pass both chambers when Democrats take control of the House in January.

The only other time the House used the War Powers Act to limit military engagement abroad was in 1993 after President Bill Clinton had already decided to remove US troops from Somalia.