The Donald Trump administration is briefing the Senate on Riyadh’s murder of Jamal Khashoggi in a last-ditch bid to kill a resolution intended to end US support for the Saudi coalition in Yemen. 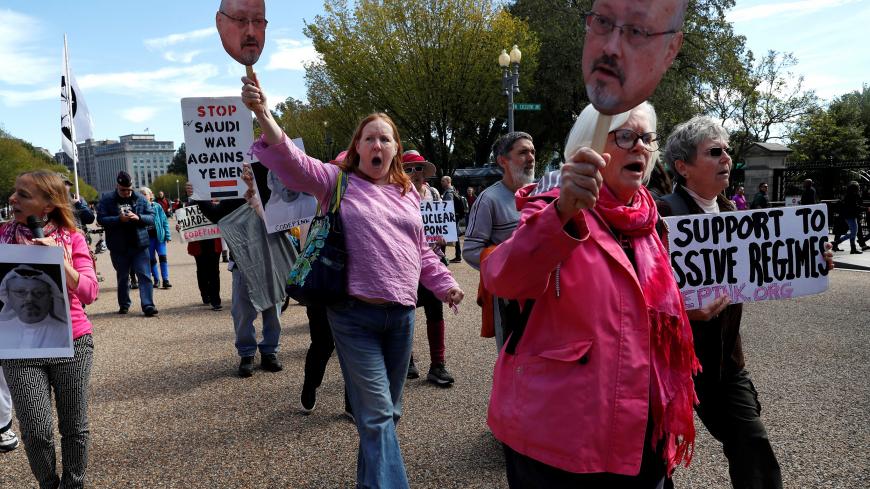 Activists march during a demonstration calling for sanctions against Saudi Arabia and against the disappearance of Saudi journalist Jamal Khashoggi, outside the White House in Washington, Oct. 19, 2018. - Reuters/Leah Millis

Senior officials from the Donald Trump administration are set to brief the Senate on Wednesday in a last-minute effort to dissuade lawmakers from voting to end US support for the Saudi coalition in Yemen.

Secretary of State Mike Pompeo and Defense Secretary James Mattis will brief senators amid unprecedented bipartisan backlash against Saudi Crown Prince Mohammed bin Salman for his alleged involvement in the murder of journalist Jamal Khashoggi and the looming famine in Yemen.

The briefing is the administration’s last chance to convince lawmakers to vote against an expedited resolution ending US support for the Yemen war. The effort by Sen. Bernie Sanders, I-Vt., to do so earlier this year failed 55-44. But the resolution now stands a chance of passing following Khashoggi’s murder and a grassroots push from anti-war activists.

“I think there is a growing understanding of the humanitarian disaster [in Yemen],” Sanders told reporters today. “We’re talking about tens of thousands of children already dead, more in danger of starving to death. People are understanding the despotic nature of the Saudi regime.”

While the Trump administration has already ended US midair refueling support for the coalition, Sanders and other lawmakers say his resolution would also end targeting assistance and logistical support for Riyadh as well as the deployment of US troops on the Saudi-Yemeni border. Yahoo News reported this month that the Defense Department is conducting a classified operation to assist the Saudis against the Houthis in Yemen, which may involve US ground troops.

Several key senators who opposed the Sanders resolution earlier this year are now undecided — and many are waiting to hear what Pompeo and Mattis have to say. At least two, Sens. Susan Collins, R-Maine, and Chris Coons, D-Del., say they’re now “inclined to support” it.

“It is deeply concerning that the president is apparently not accepting the widely reported CIA assessment of the Saudis’ direct role and the Saudi crown prince’s direct role in the murder of Khashoggi,” said Collins. “We need more than the Treasury Department sanctioning individual Saudis.”

“There’s no doubt that the Saudis are responsible in large part for the blockade that is causing a humanitarian disaster in Yemen,” she said. “I went to Yemen many years ago and it was the poorest country I’ve ever visited. And I just cannot imagine what life is like now. We’re going to see a famine the likes of which we haven’t seen in decades if something isn’t done.”

For his part, Coons is dissatisfied with reports that the White House will not allow CIA Director Gina Haspel to brief lawmakers. Haspel is one of the few people who have heard Turkey’s graphic recording of a hit squad murdering Khashoggi at the Saudi Consulate in Istanbul.

“Gina Haspel should be there,” said Coons. “The CIA ought to be telling us what the CIA has told the president and then we should reach a conclusion about what’s the right path forward to send a strong signal that we will not remain closely aligned with countries that violate fundamental American principles and human rights.”

Kate Kizer, the policy director for Win Without War, a coalition of anti-war activist groups, also noted that several senators who opposed the Sanders resolution in March may now switch their votes following Khashoggi’s murder and Trump’s lenient response.

Heller and Jones both indicated that they are waiting on the Trump administration’s briefing to make a decision.

“One of the reasons we did this series of ads is to increase public awareness of the situation in Yemen, the upcoming vote and the fact that their senator could have a really impactful say on how US policy develops moving forward,” Kizer told Al-Monitor on a press call. “We’re on the verge of what could be a serious rebuke of Trump’s foreign policy decision in Yemen.”

A YouGov poll released Monday found 75% of Americans who expressed an opinion support ending US military backing for the Saudi coalition. However, 58% of respondents did not know that the United States backs the coalition.

Still, some holdouts remain. Graham, despite his calls for a more robust response to Khashoggi’s murder, told reporters that he would vote against the Sanders resolution. Graham and Collins are co-sponsoring separate legislation introduced by the top Democrat on the Senate Foreign Relations Committee, Bob Menendez of New Jersey.

Menendez’s bill would sanction members of the Saudi royal family involved in Khashoggi’s murder, end refueling support and certain arms sales for Saudi Arabia and sanction any actors blocking humanitarian aid to Yemen. But the committee has yet to advance the bill, and Menendez has suggested he could vote in favor of the Sanders resolution despite his earlier opposition. Committee Chairman Bob Corker, R-Tenn., also remains undecided.

House lawmakers are also clamoring for their own briefing — so far to no avail. Republican leadership successfully forestalled a vote on the same resolution in the lower chamber earlier this month by a vote of 201-187. Nonetheless, the resolution has the support of Democratic leaders, who have threatened to advance it when they take control of the House next year.

As of August, the United Nations had documented 17,062 civilian casualties in Yemen since the Saudis intervened in the conflict in March 2015. Most were caused by coalition airstrikes. The coalition’s on-again, off-again offensive has also reduced activity at the rebel-held port city of Hodeidah, a crucial lifeline for humanitarian aid and food supplies, by half.