An overwhelming majority of senators want to punish Riyadh for murdering Jamal Khashoggi and because of the Yemen war. The question is how. 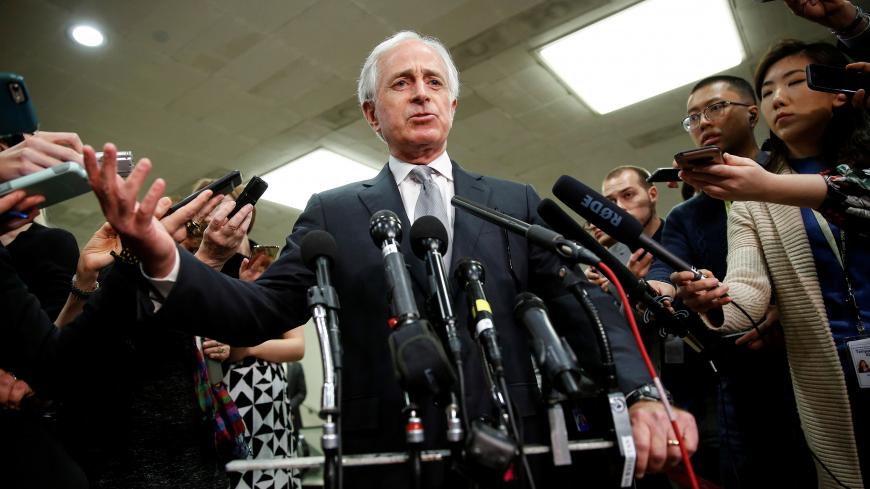 Sen. Bob Corker speaks to the media after a closed briefing for senators about the latest developments related to the death of Saudi journalist Jamal Khashoggi on Capitol Hill in Washington, Nov. 28, 2018. - REUTERS/Joshua Roberts

An overwhelming bipartisan majority of senators wants to retaliate against Saudi Arabia for murdering journalist Jamal Khashoggi, arguing that President Donald Trump’s response has been insufficient.

But with a historic vote looming next week, Congress has yet to coalesce around a consensus solution and a wide array of options remain open.

The most immediate track does not deal directly with Khashoggi’s murder and instead takes aim at the Saudi-led coalition fighting in Yemen. Early next week the Senate is set to hold an unprecedented vote over ending US support for the war.

Sen. Bernie Sanders, I-Vt., introduced the resolution pursuant to the War Powers Act, marking the first time that the Senate has tried to use the 1973 law to limit a US military intervention abroad. Because the resolution only requires 50 votes, Democrats feel confident it will pass. Despite opposition from Corker and several other Republicans, the resolution does have one Republican co-sponsor, Sen. Mike Lee, R-Utah.

Turkish media reported today that Ankara’s intelligence chief, Hakan Fidan, met with some senators this week to discuss Khashoggi’s murder, which could also fuel support for the Sanders resolution. A Senate Intelligence Committee aide confirmed the Turkish media accounts, but did not specify whom Fidan met with or what they discussed. Notably, the Turks have a recording of Khashoggi’s grisly murder at the Saudi Consulate in Istanbul.

In addition to prohibiting US midair refueling assistance for the Saudi coalition, which the Defense Department ended last month, several Democrats maintain that the Sanders resolution would also force the Trump administration to end targeting and logistical assistance. Corker, however, does not believe the resolution would go that far, while the Trump administration rejects the resolution’s legality.

“I understand why they’re doing it, and I’m certainly not going to rail against it,” said Corker. “I’m just not going to support it myself.”

The chairman prefers to deal with the Saudis and Yemen via another bill unrelated to the War Powers Act. That bill, introduced by the top Democrat on the Senate Foreign Relations Committee, Bob Menendez of New Jersey, has five bipartisan co-sponsors, including several Iran hawks.

Unlike the Sanders resolution, Menendez’s bill is not a blanket ban on all US support for the Saudi coalition, but it does ban support for midair refueling in Yemen. It would also ban offensive arms sales to Saudi Arabia and sanction Saudi officials and members of the royal family both for Khashoggi’s assassination and for blocking humanitarian aid flows to Yemen.

Corker hopes to advance the bill out of the Foreign Relations Committee next week. Ironically, Menendez himself may thwart Corker’s attempt to do so: He hasn't agreed to a markup of his own bill, opting instead to play hardball in order to secure a straight up or down vote on the Sanders resolution, hoping to avoid watering it down with amendments on the Senate floor.

Citing “broad support” for his bill, Menendez suggested that Democrats could hold up Senate floor business to secure a floor vote or attach it to an unrelated, must-pass spending bill. But Senate Appropriations Chairman Richard Shelby, R-Ala., told Al-Monitor earlier this week that he is hesitant to put unrelated riders on the spending bill.

Meanwhile, Iran hawks are also determined to thwart the Yemen resolution next week — even as they call for other action against Riyadh.

Rubio has instead joined five other bipartisan senators in introducing a nonbinding resolution stating that the Senate “has a high level of confidence that Mohammed bin Salman was complicit in the murder of Jamal Khashoggi.”

CIA Director Gina Haspel briefed a select group of Senate leaders on Khashoggi’s assassination Tuesday, apparently contradicting statements from Secretary of State Mike Pompeo and Defense Secretary James Mattis last week that there was no “smoking gun” implicating the crown prince. Reuters reported today that Pompeo and Mattis are set to brief the House next week.

Rubio also joined four other Republicans in October to ask the Trump administration to suspend all negotiations on civil nuclear cooperation with Riyadh. The Florida Republican told Al-Monitor today that it would be a “mistake” to move ahead with a deal “without changes in our relationship.”

Nonetheless, Energy Secretary Rick Perry, who is involved in the negotiations, announced this week that he is planning another trip to Saudi Arabia.

Meanwhile, Senate Minority Whip Dick Durbin, D-Ill., has once again called on the Trump administration to expel the Saudi ambassador to the United States, Khalid bin Salman, the crown prince’s brother. Prince Khalid allegedly told Khashoggi that he needed to obtain divorce papers at the Istanbul consulate, where the journalist was killed.

Democrats are also determined to forestall Republican efforts to attach unrelated amendments during the vote next week for fear of setting a bad precedent during the first such Senate War Powers Act vote in history.

“I don’t think anyone would ever use the War Powers Act to try to send a message on foreign policy if it would then force votes on health care, immigration and oil drilling,” said Sen. Chris Murphy, D-Conn., an original co-sponsor on the Sanders resolution.

Even if the Sanders resolution passes the Senate next week, House Republican leaders have been more reluctant to challenge Trump’s pro-Saudi stance than their Senate counterparts, going so far as to quash the same resolution in the lower chamber last month.

As such, the Senate will likely have to vote on the Yemen resolution once again after Democrats take control of the House in January. However, Republicans will simultaneously expand their margin in the Senate, making it more difficult to pass in the upper chamber. And Sen. James Risch, R-Idaho, who is less critical of both the Saudis and Trump, is set to take control of the Foreign Relations Committee after the retiring Corker leaves office at the beginning of next year.

Still, lawmakers are confident that Congress will pass something taking aim at the Saudis.

“All of this activity occurring at the same time itself sends a very strong signal,” Corker said.