Iran's president has embarked on a trip that will take him to Japan, a host that has been scrambling to mediate some Tehran-Washington rapprochement at a critical time for the Iranian economy. 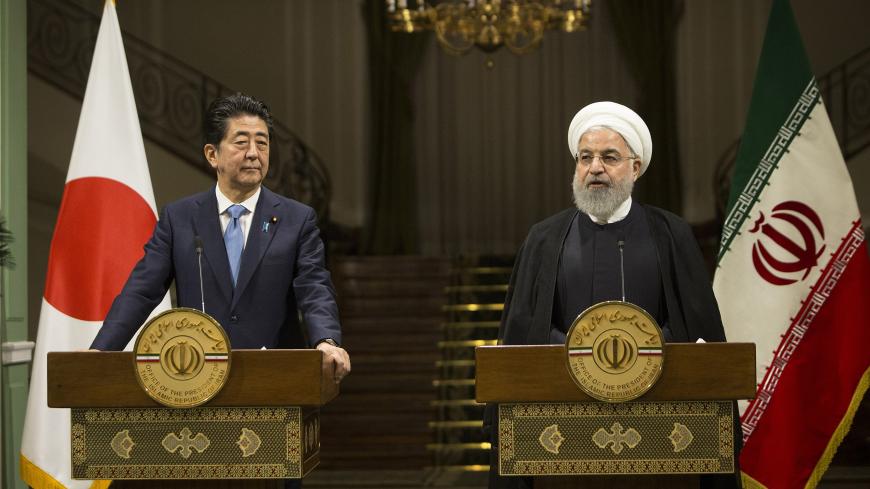 Iranian President Hassan Rouhani took off from Tehran Dec. 17 to visit Malaysia and Japan in what is seen as a major diplomatic push to save an economy severely battered by US sanctions. Rouhani will be in the Malaysian capital for the high-profile Kuala Lumpur Summit 2019 on international development.

But it is the second leg of his trip, taking him to Tokyo, that has grabbed media attention. The Iranian president will meet with Prime Minister Shinzo Abe Dec. 20 in a highly anticipated summit expected to revolve around Japan-led mediation between Tehran and Washington.

Ahead of his departure from Tehran, Rouhani appeared cautious, refusing to refer to mediation as a key agenda point. "The US tyrannical pressure and illegal sanctions will not sustain," he told reporters, adding, "World nations are seeking close and good ties with Iran."

In the runup to the trip, Rouhani administration officials have maintained a more or less diplomatic tone or even, at times, a line of denial. "The Japan visit has nothing to do with such issues as negotiations with the United States," government spokesman Ali Rabiei said at a briefing in Tehran Dec. 16. Yet he noted that Iran "takes into serious consideration" mediation efforts by "our Japanese friends."

Addressing a Japan-Iran trade panel in Tehran Dec. 16, Deputy Foreign Minister Abbas Araghchi — the man who delivered Rouhani's message to the Japanese premier in Tokyo earlier this month — cited Abe's June visit to Tehran as a manifestation of Japan's "courage and prudence" in maintaining ties with the Islamic Republic. Abe's mission to establish a connection between Tehran and Washington, nonetheless, yielded no tangible results.

The Rouhani circle's insistence that the trip will focus on bilateral economic ties, not Japanese mediation comes against a backdrop of immense pressure from hard-liners, who have cautioned Rouhani to banish from his mind any thought of a compromise with Donald Trump. Since reports came out last week of Rouhani's Japan visit being finalized, critics of his foreign policy strategies have told him to refrain from "stepping on the already taken road."

Iran's Supreme Leader Ayatollah Ali Khamenei and his hard-line followers have urged the Rouhani government not to hinge the country's economy on improved relations with the West in the hope of sanctions relief. Tasnim News Agency, funded by the hard-line Islamic Revolutionary Guard Corps, advised Rouhani "to learn a lesson from the past," an implicit reference to the clinching of the Iran nuclear deal, which the Trump administration abandoned in May 2018. To contextualize the situation, Tasnim likened possible Rouhani efforts toward normalization with the United States to "committing harakiri" — a Japanese form of suicide.

In contrast, sitting on the other end of the typically divided Iranian political spectrum, Reformists are calling on Rouhani not to miss the chance to engage with major nations at a time when Iran's oil income is diminishing due to key customers' reservations in the face of lurking US penalties.

"Economic woes and social developments prompted Rouhani's decision to visit Japan," international affairs analyst Ali Bigdeli told pro-Reform daily Arman-e Melli. "We are at a stage where the current economic status cannot be imaginable for the long run." The Reformist analyst advised the Iranian government to reconsider its negotiation "bottom lines" during the Tokyo visit and to get Trump on board, a president "who is now easier to deal with" and "more restrained" as he seeks reelection in 2020.