Iran has condemned new EU sanctions targeting its Intelligence Ministry over alleged assassination plots, especially as they are imposed at a time when Tehran is still awaiting a long-stalled European payment mechanism to circumvent US sanctions. 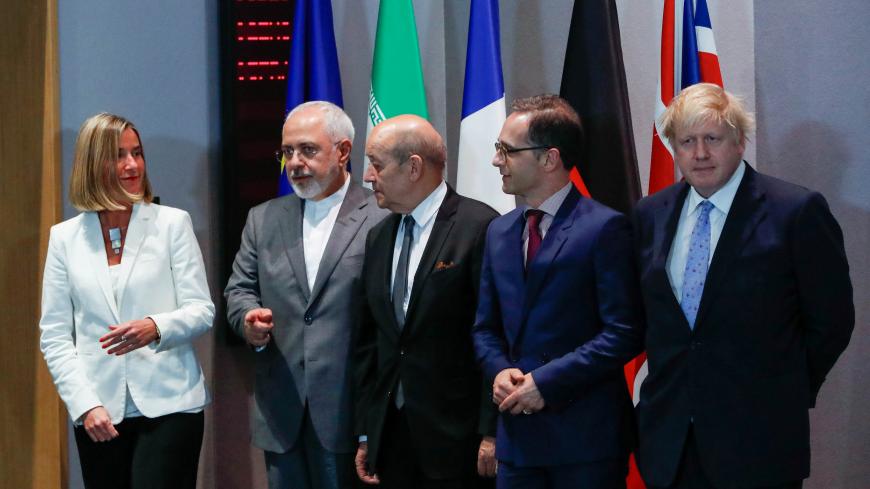 In what seemed to be fresh diplomatic pressure on Iran, the European Union announced Jan. 8 that it was freezing assets belonging to a unit of Iran's Intelligence Ministry and two of its officials. But that's not where it came to an end. The Netherlands also leveled accusations against Iran, saying Tehran had plotted two murders on its soil. In doing so, Dutch officials joined French and Danish counterparts in implicating Iran in alleged attacks on European soil.

The EU sanctions are the first European punitive measure against Iran since Tehran inked the Joint Comprehensive Plan of Action (JCPOA) with major powers in 2015. Under the deal, the EU had committed to nullifying a series of sanctions it had imposed on Tehran over its nuclear program.

The European announcement, pushed by the Danish government, was made as Iranian Foreign Minister Mohammad Javad Zarif is on a hectic three-day diplomatic visit to New Delhi to negotiate expanded trade with India in an effort to mitigate the impacts of US sanctions reimposed following Washington's withdrawal from the JCPOA in May 2018.

“Europeans, [including] Denmark, Holland & France, harbor [Mujahedeen-e-Khalq] — who killed 12,000 Iranians & abetted Saddam's crimes against Iraqi Kurds — as well as other terrorists staging murder of innocent Iranians from Europe," Zarif wrote on his Twitter account to hit back at the Europeans, who he said "won't absolve responsibility for harboring terrorists.”

The move came as Iran has been awaiting an EU mechanism known as the Special Purpose Vehicle (SPV) meant to keep business with Iran afloat amid US sanctions. But signs of frustration are already appearing not just from the country's hard-liners. On the sidelines of his meetings with Indian officials, Zarif noted that while working with the Europeans, Iran won’t wait for them to enforce the SPV and will instead turn to what he called "traditional partners" — namely India, China and Russia.

Kayhan, a hard-line daily affiliated with the office of the supreme leader, found the EU announcement to be a validation of its previous predictions that, unlike what the Iranian government assumes, Europe will tighten the noose around Tehran's neck rather than help it enjoy the dividends promised by the JCPOA.

For months, the conservative camp in Iran has incessantly rejected any trust in the EU, warning the Rouhani administration that the Europeans will never sacrifice business interests with the United States over engagement with Iran.

"Under the government's silence and inaction, Europe continues to intensify its hostile actions against the Iranian nation," Kayhan wrote. "Certain European countries have turned into bases and shelters for [anti-Iran] terrorist and separatist groups." The paper also criticized Iran's diplomatic apparatus for its "passive and humiliating" reaction in this regard. According to Kayhan, while admitting that Europe is "killing time," the Iranian government is still pinning its hopes on empty European promises and has sent the wrong signal that it will continue to stick to the JCPOA at any cost.

In a critical piece, moderate daily Khorasan also slammed Europeans for pushing Iran into a corner instead of accelerating the implementation of the stalled SPV. Javan, a conservative paper close to the Islamic Revolutionary Guard Corps, likened Europe to a cow that has given Iran "the kick rather than the milk."

Over the past year, the Trump administration has urged Europe to adopt a tougher position on Iran, referring to Iranian “terrorism” on European soil. The European sanctions — on the basis of terror allegations — have also coincided with US Secretary of State Mike Pompeo's Middle East tour, which appears designed to further rally the United States' regional allies against Tehran.