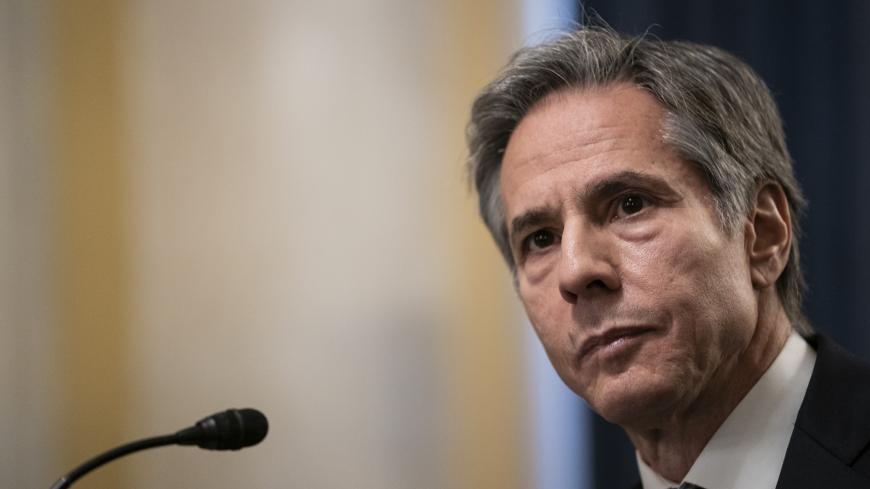 Antony Blinken speaks during his confirmation hearing to be secretary of state before the US Senate Foreign Relations Committee on Jan. 19, 2021, in Washington. Blinken was previously deputy national security adviser and deputy secretary of state in the Obama administration. - Alex Edelman-Pool/Getty Images

President-elect Joe Biden’s nominee for secretary of state, Antony Blinken, pledged to consult with Israel, Gulf allies and Congress when seeking "a longer and stronger" agreement to rein in Iran's nuclear ambitions. During his Senate confirmation hearing Tuesday, Blinken said the incoming administration would “engage on the takeoff, not just the landing” with allies and partners before taking steps to rejoin the landmark nuclear agreement.

"President-elect Biden is committed to the proposition that Iran will not acquire a nuclear weapon,” Blinken told the Senate Foreign Relations Committee. “Iran with a nuclear weapon or the threshold capacity to build one is an Iran that would act with potentially greater impunity than it already is.”

If Iran returns to strict compliance under the nuclear pact, Biden has said he will reenter the multilateral pact as a starting point for follow-on negotiations to “tighten and lengthen Iran’s nuclear constraints” and address Iran's missile program. Blinken said Tuesday that “we are a long way from there," adding that the administration would need to first ensure Iran is making good on its obligations.

Since President Donald Trump exited the pact in 2018 and reimposed harsh economic sanctions, Tehran has gradually increased its stockpile of low-enriched uranium. In a major breach of the deal, Iran announced earlier this month that its scientists are producing uranium metal, a fuel used in nuclear reactors.

Blinken, who was closely involved in the crafting of the original 2015 deal, also promised the committee that the Biden administration would engage in “genuine consultations, not notifications” with Congress when it comes to its dealings with Tehran.

Blinken, despite a grilling from some members of the committee, is expected to sail through confirmation process. During the hearing, Republican Sen. Lindsey Graham of South Carolina called the longtime Biden aide and foreign policy veteran an “outstanding choice" for America's top diplomat.

The Foreign Relations Committee is familiar territory for Blinken, who in 2002 took a job working for Biden as the committee’s Democratic staff director. He later served as deputy secretary of state in the Obama administration and was Biden’s chief foreign policy adviser during the campaign.

Blinken on Tuesday also fielded questions on Israel, including whether he supported the recent US-brokered normalization deals between the Jewish state and several Arab countries. Blinken applauded the agreements, but said there are certain commitments that the incoming administration would “take a hard look at” — a possible reference to the Trump administration’s planned $23 billion arms sale to the United Arab Emirates.

Blinken’s testimony came the same day controversial terrorism designations against the Houthi movement in Yemen took effect. The United Nations and humanitarian organizations have warned that the rebels’ blacklisting, which was first announced by outgoing Secretary of State Mike Pompeo last week, could hamper much-needed aid operations in the war-ravaged country.

Blinken said he is concerned that the labeling won’t bring the Houthis to the negotiating table as intended, adding that the Biden administration will review the terrorism designation “immediately” upon taking office.

Blinken also said Washington should review the impact of recent sanctions on Turkey and then determine whether more needs to be done to punish the NATO ally. The Trump administration in December imposed sanctions under the Countering America’s Adversaries Through Sanctions Act in retaliation for Ankara’s multibillion-dollar purchase of Russian-made S-400 defense systems.

“The idea that a so-called strategic partner of ours would actually be in line with one of our biggest strategic competitors in Russia is not acceptable,” Blinken said.