Iran’s shows off ballistic missiles, drones in drill amid US tensions

The military exercise in Iran's central desert comes as the Trump administration makes a final push to punish Tehran. 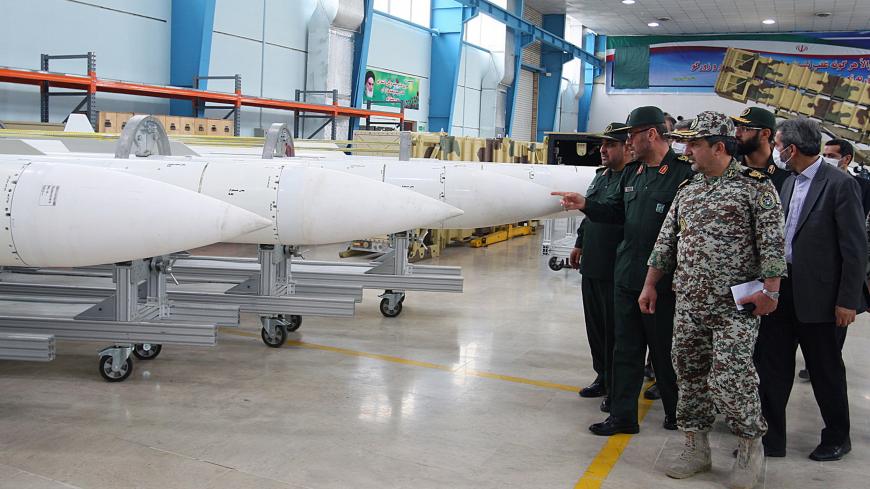 “A combined attack was carried out on a hypothetical enemy base and the destruction of all predetermined targets using a new generation of surface-to-surface ballistic missiles and drones,” Iran’s semi-official Tasnim news agency said.

The aircraft used in the drill “strongly resembled” the so-called Delta drones used in a 2019 attack on two major Saudi oil facilities, according to The Associated Press. Tehran denied any involvement in the attack, and Yemen’s Iran-aligned Houthi rebels took credit.

The show of force, which was attended by IRGC Commander-in-Chief Maj. Gen. Hossein Salami and IRGC aerospace Commander Brig. Gen. Amir Ali Hajizadeh, comes days after Iran announced plans to resume patrols in the Red Sea and tested short-range naval missiles as part of a two-day drill in the Gulf of Oman.

Tensions between Tehran and Washington are running high in the waning days of Donald Trump’s presidency as Iran marks the one year anniversary of the US drone strike that killed Maj. Gen. Qasem Soleimani in Baghdad.

The Trump administration has ramped up its economic pressure campaign on Iran, imposing sanctions on the country’s metals, banking and oil sectors. On Wednesday, the United States branded the chief of staff of Iraq’s Popular Mobilization Units a designated global terrorist, accusing Abu Fadak of working with Iran’s elite Quds Force.

Earlier this week, Secretary of State Mike Pompeo announced he would be designating the Houthi rebels in Yemen as a foreign terrorist organization, and days later, he accused Iran of providing safe harbor and logistical support to al-Qaeda.

The punishing moves by the Trump administration could complicate President-elect Joe Biden’s pledge to revive diplomacy with Iran. If Iran returns to strict compliance under the landmark 2015 nuclear deal, Biden says he will reenter the multilateral pact as a starting point for follow-on negotiations to “tighten and lengthen Iran’s nuclear constraints” and address its missile program.

But Iran has raised the stakes, announcing earlier this month that it had resumed 20% uranium enrichment at its underground Fordow facility near the city of Qom. In another major breach of the nuclear agreement, the Iranian ambassador to the United Nations said this week that Iran had begun to produce uranium metal, a fuel used in nuclear reactors.