Iran has announced it built a new subterranean missile base as tension between Washington and Tehran escalates. 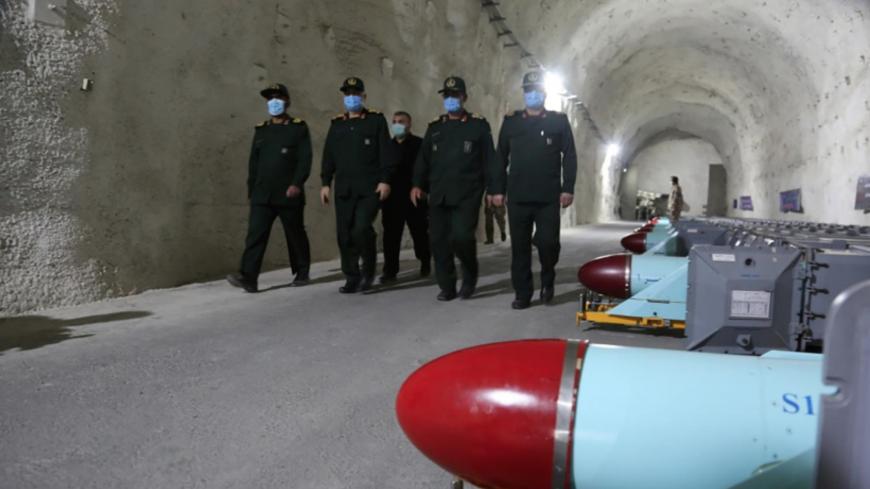 Iran revealed a new subterranean missile base near the Persian Gulf today, in Tehran’s latest display of defiance amid pressure from the United States over its weapons program and regional influence.

The tunnels of the facility, said to be somewhere near the Persian Gulf, appeared to be filled with cruise and ballistic missiles.

“We believe that our enemies do not accept the power of logic, but rely on the logic of power,” Salami said. “Therefore, we have no option but to strengthen the defensive and offensive deterrent power for preventing he imposition of their hegemonic will and plots.”

Salami said that the IRGC navy possesses surface-to-surface, air-to-sea, land-to-sea and sea-to-air missiles and will use these weapons to defend Iran’s interests in the region with ”strong offensive defense,” according to Tasnim News Agency.

Iran claims the site is one of several facilities housing the IRGC’s advanced conventional ballistic missiles. In November, the IRGC unveiled what it said was a new Iranian-made long-range ballistic missile launching system.

The United States has deployed four pairs of long-range nuclear-capable B-52 bombers to the Middle East, as well as an an aircraft carrier and a guided-missile submarine over the past several weeks in order to deter Iranian officials and their regional militia proxies from carrying out their promises of revenge for the US assassination of former Quds Force Commander Qasem Soleimani in Baghdad last year.

Iran’s Supreme Leader Ali Khamenei has also promised retaliation for the assassination of an Iranian scientist believed to be one of the country’s top nuclear experts. Officials in Tehran have blamed Israel for the killing.

The outgoing administration of President Donald Trump has pushed increased arms sales to Iran’s regional rivals in the Gulf and most recently urged national leaders to establish ties with Israel. The outgoing administration has moved ahead with plans to sell up to 50 advanced F-35 fighter jets and armed drones to the United Arab Emirates following the country’s normalization of ties with Israel.

Iran’s leaders have continued to publicly violate the 2015 nuclear agreement known as the Joint Comprehensive Plan of Action since the Trump administration unilaterally walked out of it in 2018. New construction has been revealed at Iran’s Fordow and Natanz facilities, with increased uranium enrichment suspected at both sites in violation of the international accord.

An Iranian government spokesman announced earlier this week that the government had already begun to enrich uranium to 20% at Fordow. That level, while a violation of the deal, is significantly below what is required to produce a nuclear weapon.

US President-elect Joe Biden has said his administration will seek to negotiate with Iran to rejoin the nuclear deal as a basis for future negotiations, but Iranian officials have said that their regional influence campaign and ballistic weapons program would remain off the table in talks over its nuclear program.

Biden’s pick for national security adviser, Jake Sullivan, told CNN on Sunday that the issue of Tehran’s ballistic missile program “has to be on the table as part of that follow-on negotiation.”