The former secretary of state's warning follows other criticism of a Trump administration show of military force to dissuade Iran from potential attacks. 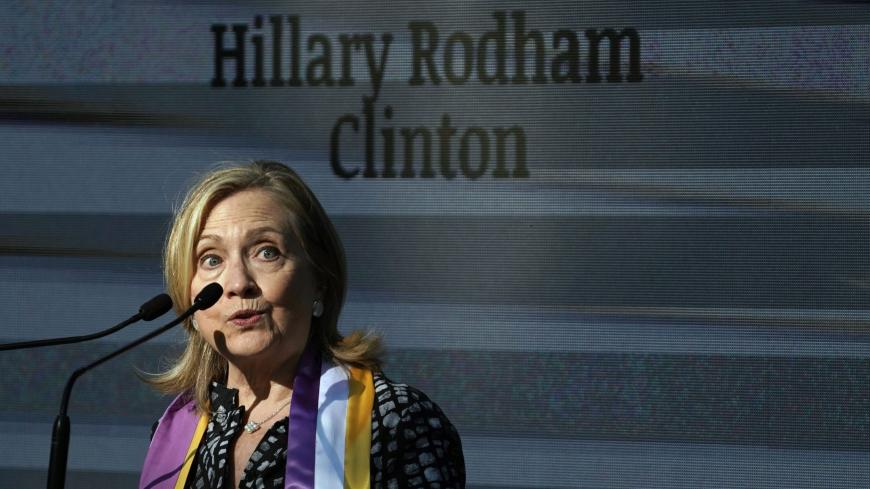 Former US Secretary of State and former presidential candidate Hillary Clinton at the unveiling of the statue of women's rights pioneers Susan B. Anthony, Elizabeth Cady Stanton and Sojourner Truth in Central Park in New York on Aug. 26, 2020. - TIMOTHY A. CLARY/AFP via Getty Images

Former US Secretary of State Hillary Clinton warned Tuesday that the outgoing administration of President Donald Trump is “playing a dangerous game” with Iran.

“One gift Trump could give the country and the world is not to start a war with Iran in his final 15 days in office,” Clinton, who lost to Trump in the 2016 US presidential race, wrote on Twitter.

The comment by Clinton, who served as the top US diplomat under the Barack Obama administration, comes after Trump reportedly ordered a US Navy supercarrier, the USS Nimitz, back to the Middle East, reversing a decision by Acting Defense Secretary Christopher Miller three days prior in a de-escalatory gesture toward Iran.

The US has toured heavy military assets in the Middle East in recent weeks, including the Nimitz, three sorties of nuclear-capable B-52 bombers and a guided-missile submarine, the USS Georgia, which was escorted into the Persian Gulf by two cruisers. Israel also sent at least one submarine through the Suez Canal.

The show of force is ostensibly meant to dissuade Iran and its proxy forces in the region from promised retaliation around the one-year anniversary of the Trump administration’s assassination of Iranian Maj. Gen. Qasem Soleimani.

Clinton’s statement follows criticism by the former senior defense official for international security, Kathryn Wheelbarger, who argued in The Wall Street Journal last month that extending the Navy’s deployments to the region strains the ships and crews and is not guaranteed to prevent retaliation by Iran or its regional proxies.

US defense officials have also offered conflicting interpretations of intelligence, which some have said suggests Iran may be preparing to strike US forces or partners in the Middle East using local pro-Tehran militias, according to CNN.

Iranian Foreign Minister Mohammad Javad Zarif has accused the Trump administration of building a “pretext for war.” Iran’s government Tuesday requested an Interpol notice for Trump and dozens of other US government officials it said were complicit in Soleimani’s assassination.

An Iranian government spokesman announced Monday that his government would return to 20% uranium enrichment at the Fordow facility, in direct violation of the 2015 Joint Comprehensive Plan of Action (JCPOA), commonly known as the Iran nuclear deal.

The level is still far from that required for weapons-grade material. Iran’s government has said it is willing to rejoin the 2015 agreement if the incoming Biden administration does so, but has said the topic of its regional influence and ballistic missile program will not be a part of the nuclear deal discussions.

The Trump administration unilaterally walked out of the deal in 2018, replacing it with a campaign of stifling economic sanctions in hope of forcing a rollback of the Islamic Republic’s support for regional militias and weapons program.

Engaging Iran will be a top priority for the Biden administration, which takes office Jan. 20. On Tuesday, Politico reported that Biden had chosen Wendy Sherman, a former lead negotiator in the JCPOA talks, as deputy secretary of state.