The USS Nimitz spent more than 270 days at sea conducting exercises with the Indian navy and seeking to deter Iran from retaliating for last year's killing of Qasem Soleimani. 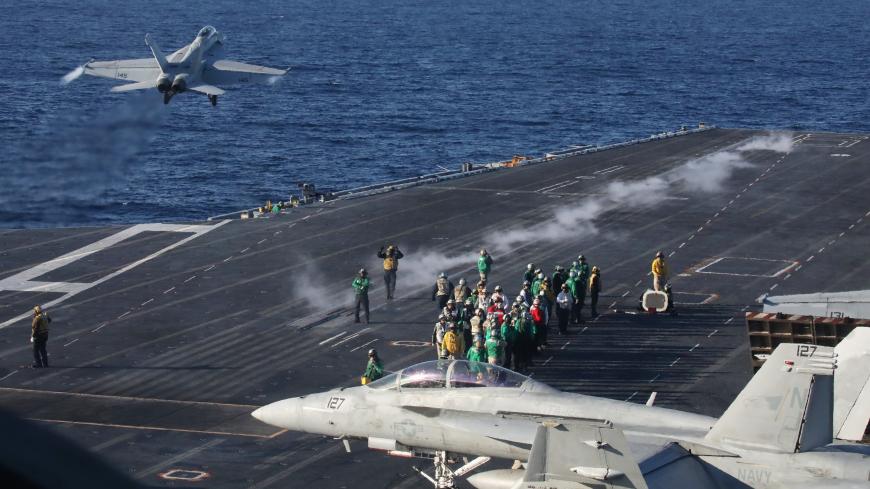 An F/A-18F Super Hornet fighter aircraft takes off from the flight deck of the USS Nimitz (CVN 68) aircraft carrier while at sea on Jan. 18, 2020, off the coast of Baja California, Mexico. The carrier has been ordered home from the Middle East, the Pentagon confirmed on Feb. 2, 2021. - Mario Tama/Getty Images

The US Navy’s Nimitz carrier strike force has left the Middle East after a nine-month deployment abroad that was extended to keep pressure on Iran, the Pentagon confirmed Tuesday.

Pentagon spokesman John Kirby declined to tell reporters whether any specific event had influenced Defense Secretary Lloyd Austin’s decision to send the carrier home, nor whether the United States’ assessment of the potential for hostile Iranian activity in the region had changed.

“It is a balancing act between requirements and the capabilities on hand,” Kirby said, adding, “The secretary believes that we have a robust presence in the Middle East to respond.”

“It would be imprudent for us to think this is based on a specific piece of intel in a specific part of the world,” he said.

USNI first reported the decision to bring the Nimitz back to the United States. Following a late December decision to send the supercarrier home, the Nimitz was ordered to return to the Middle East in early January amid public threats from Iranian leaders against US officials.

The Nimitz also took part in exercises with the Indian navy and assisted the US troop drawdown from Somalia since leaving San Diego in May 2020. Its home port is in Bremerton, Washington.

US Central Command has led a show of force in the region to deter Iran’s military and its proxies from potentially acting on threats by leaders in Tehran to retaliate for last year’s killing of Iranian Quds Force commander Qasem Soleimani by the United States.

The US Air Force has dispatched six round-trip flights of nuclear-capable B-52 bombers to the Middle East since November, a trend that is likely to continue. The Navy also publicized the deployment of a guided-missile submarine, the USS Georgia, escorted by two cruisers into the Persian Gulf late last year.

CENTCOM commander Gen. Kenneth “Frank” McKenzie has emphasized that the display is intended as an act of deterrence and that the US does not seek conflict with Iran. McKenzie, who visited US partners in the region last week, has credited the deployments with potentially averting Iranian hostile activity in the region amid the presidential transition in Washington.

It is not clear if another carrier will replace the Nimitz. Kirby said Tuesday that Austin had made no decisions on changes to US force levels in Iraq and Afghanistan. Some 2,500 US troops remain in each country, the result of a last-minute order from former President Donald Trump.

The Nimitz’s departure comes as the Biden administration is looking to rejoin the 2015 nuclear deal with Iran and other nations. Officials in both Washington and Tehran, however, are publicly insisting the other side return to compliance with the agreement first.

US Secretary of State Antony Blinken reiterated Tuesday that a mutual return to the deal will take time. Just last week, the Biden administration named Robert Malley as its lead Iran envoy.

The return of Malley, who previously served on the Obama administration’s National Security Council, triggered sharp criticism from observers opposed to a more diplomatic US approach to Iran.